The New Zealand dollar ended the week with a string of gains and the market has repriced its outlook on interest rate hikes. The kiwi has been on a roll since a very strong jobs report all but cemented expectations for a rate hike by the Reserve Bank of New Zealand on Aug. 18 (its first since mid-2014). This would make it one of the first developed countries to raise rates since the pandemic hit.

Meanwhile, across the Tasman Sea, the Aussie dollar managed to keep its head above water despite record Covid cases in Australia’s most populated city, Sydney. The Aussie’s strength is also especially surprising because most Australian policymakers are still signaling no move in interest rates until at least 2024 (yes, you read that right) - flabbergasting, to say the least.

In spite of the gains down under, the big story of the week was Friday’s US jobs report and its implications for a taper announcement. The US economy created 943K jobs in July, which was better than the forecast of 870K. June’s total was revised up to 938K. In addition, the unemployment rate fell from 5.9% to 5.4%, while 5.7% was expected. Also, average hourly earnings rose by 0.4% vs 0.3% expected and a higher revised 0.4% in June. 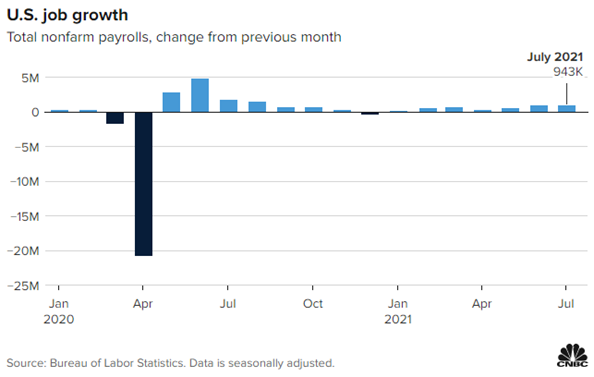 When the Fed last met, they changed the FOMC statement to say the Fed had made progress towards its goals. This was to reflect that that the US economy is closer to the “substantial further progress” condition for tapering. However, during the press conference after the meeting, Chairman Jerome Powell said, "I think we're a ways away from having had substantial further progress toward the maximum employment goal". This suggests that there is still ground to cover before he is ready to announce a taper of the Fed’s bond purchasing program, aka QE.

Going back to the job numbers, the average monthly jobs growth has slowed slightly in Q2 (468K) from Q1 (489K). Also, the four-week moving average of weekly initial jobless claims is unchanged in July from June (394K). Perhaps, Powell is correct, and the jobs data may not be enough information for the FOMC to determine if “substantial further progress” has been made.

Fed policymakers have made pro-tapering statements since the last FOMC meeting and buoyed by the recent jobs data, those calls will grow louder. Having said that, it is important to understand who are making those pronouncements. As I laid out in my July 6th Dispatch “Dotes vs Votes”, not all Fed policymakers are created equal. Not all members can vote at the FOMC meeting, only the Board of Governors can. All the pro-taper statements indicate that there may be a division it the policymakers, which could lead to a compromise on taper in terms of timing, size, and pace.

Powell’s patience may be prudent. The chart of the Citi Economic Surprises Index has fallen below zero, signaling that analysts have over forecasted growth and inflation. Furthermore, the US GDP has peaked – the NY Fed GDP Nowcast estimate for Q3 growth has slowed to 3.7%. That is a far cry from the Q2 preliminary estimate of 8.5%. This may lead to a growth scare in Q4 which could push out tapering into next year and perhaps more stimulus from the Fed and the government. 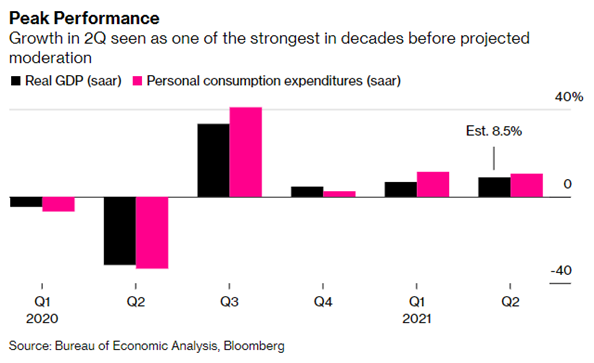 The jobs data, however, did revive the USD. The US dollar index shot higher after the jobs report and the momentum indicators are all signaling more gains to come. The dollar looks like it will challenge last month’s high as well as March’s high. 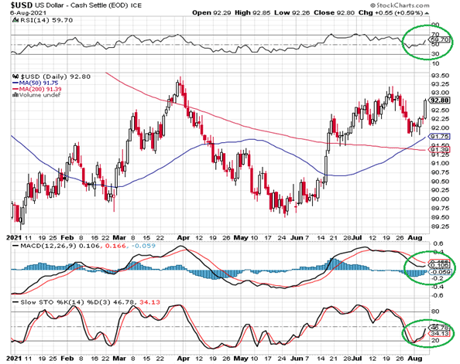