The CAD was the top performing currency for the second straight week. Despite the dreadful vaccine rollout in Canada, the CAD has taken flight on continued strong economic data and a repricing of interest rates after the Bank of Canada meeting.

Friday’s release of February employment data was exceptional. The Canadian economy created 259,200 new jobs, which completely erased January’s setback and drove the unemployment rate from 9.2% to 8.2%, its lowest since last March. Full-time jobs also advanced 88,200, along with an increase of 171,000 part-time jobs, and a big rise in hours worked (+1.4%). These are the kind of numbers that will force economists to rerate their growth forecast for Q1 and the rest of the year.

The Bank of Canada held its policy meeting last Wednesday and they did the expected: maintained the status quo. Interest rates would remain at the record low 0.25% until economic slack is absorbed, which is not expected to until 2023, at the earliest. The BOC also left their bond purchase program unchanged, buying up to $4B a week.

The BOC did try its hand at strategic ambiguity. It added the word “continues” to the January statement: “As the Governing Council continues to gain confidence in the strength of the recovery, the pace of net purchases of Government of Canada bonds will be adjusted as required.”

It also, for the first time, explicitly linked the labour market and output gap. Historically, GDP has been the only driver of the output gap. While the US Federal Reserve has a dual mandate, interest rates and employment, the BOC does not. This would appear to give the BOC more leeway on when they would like to see the output gap close. This would give them strategic ambiguity to maximize the bank’s policy flexibility.

The European Central Bank also held its policy meeting last week. As I outlined in last week’s Dispatch (Powell’s Bluff), the Fed wants all of us to believe that the rise in bond yields is not due to higher inflation expectations and everything to do with post-pandemic optimism on the economy. The ECB was not as brave; it moved to clamp down on the rise in bond yields by announcing that it would immediately boost its bond-buying program "significantly". The definition of "significantly" was not given, demonstrating strategic ambiguity yet again by a central bank to maximize policy flexibility. 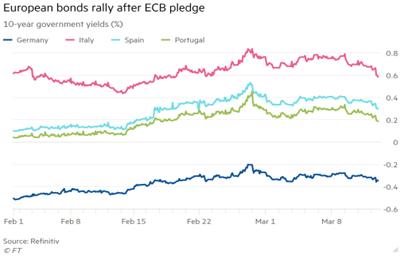 Fed Chairman Alan Greenspan used to label any rise in inflation as “transitory”. Powell himself has used that term to paint the current rise in inflation expectations. Based on history, they may be correct – interest rates have fallen over the last 30 years because there has been no sustained rise in the CPI. For the next 3 months the CPI will rise, but this is mainly because of base effects – namely, it will rise after it plummeted due to the onset of the pandemic last March.

You may ask yourself, why is this so important? Well, in world of extremely high debt and leverage an increase in interest rates is catastrophic. Thus, the Fed will not let this happen. They will try to jawbone yields down first and if that doesn’t work, they will spring into action. The last thing they need is for monetary conditions to tighten just as the economy is ready to spring back into recovery.

Ironically, the Fed may get some help from overseas buyers of Treasurys. Bond yields may stabilize and edge lower from an increase in demand from foreign buyers. Easy monetary and fiscal policy in the US would normally make foreigners sellers of US debt, however, thanks to hedging, there is about 100 bps of pick-up by buying Treasurys and hedging the currency risk over their local bonds. Therefore, foreign demand may temper a rise in bond yields at this time. 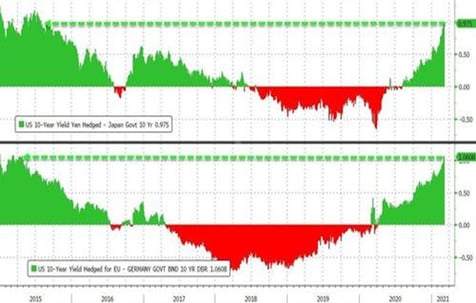 With this in mind, we think it likely that the Fed will ease monetary conditions at this week’s policy meeting. With the $1.9T stimulus bill passing and last week’s solid Treasury bond auctions under its belt, the Fed has little reason to change its stance. The most interesting metric to watch for will be the infamous dot plot – the Fed members’ expectations for interest rates in 2022 and 2023. In their December plot, only one Fed policymaker expected interest rates to rise by 2022. Mr. Market will be keen to see if that is still the case.

Additionally, Mr. Market will scrutinize the central banks economic projections given the successful vaccine rollout. The Fed’s December forecasts of 4.2% economic growth and a 5.0% unemployment rate look too low and are ripe for revisions.

Mr. Market will also watch Powell’s press conference closely for insight on the Fed’s future plans. The media may seek a definition of “substantial progress” toward the central bank’s employment and price stability goals to gauge the timing of the eventual tapering of QE. We suspect that strategic ambiguity will be employed to keep the Chairman’s options open.

Thus, if the Fed doesn’t offer any new stimulus measures, bond yields will have the “all clear” to move higher, which will lend support to the USD. 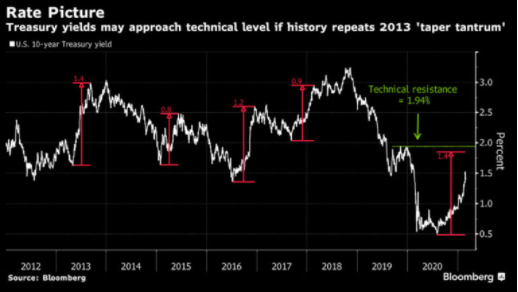 The week ahead is packed with market moving events. There is a regional election in Germany and the federal elections in the Netherlands. The Fed, the Bank of England, and the Bank of Japan will also hold policy meetings. Finally, there are a number of high-frequency data points such as the Australian jobs report, US retail sales, Germany’s ZEW Economic Sentiment Index, and Canada’s retail sales.