The CAD was last week’s top performer, powered ahead by strong economic data and oil. The January Ivey Purchasing Managers Index (PMI) rose to 60 from 48.4, its highest since August and the first time in three months it was above the 50-threshold, indicating an increase in activity. The employment component rose to a four-month high at an adjusted 54.0 from 41.5 in January, while the inventories index was at 57.8, up from 56.7. Canada also posted its first trade surplus since May 2019 as exports surged higher in January. The surplus of $1.4 billion was the largest since July 2014 and compared with a revised deficit of nearly $2 billion in December. Meanwhile, the price of crude gained 3.84% last week on the OPEC+ decision not to boost output next month.

The Canadian economy contracted 5.4% in 2020, its deepest annual drop on record. However, it ended 2020 on a brighter note and grew at a stronger-than-expected annualized rate of 9.6% last quarter. While the Bank of Canada will be pleased to see these improvements, the level of Covid vaccinations may become a problem. Only 1.5% of Canadians have been fully vaccinated compared to 9.07% for Americans. This fact alone may temper BOC Governor Tiff Macklem’s remarks at this Wednesday’s policy meeting, despite signs of froth in Canada’s real estate market.

Meanwhile, the USD continued to power ahead after a very strong jobs report reinforced the move higher in the US 10-year yield. The USD moved to its strongest level against the yen since June 2020 and the euro since November 2020. The speed in Covid vaccinations, the newly approved $1.9T Covid stimulus package, and the gradual reopening of the service and hospitality industries are giving the currency a lift. The US dollar index has moved higher since bottoming at the start of the year. 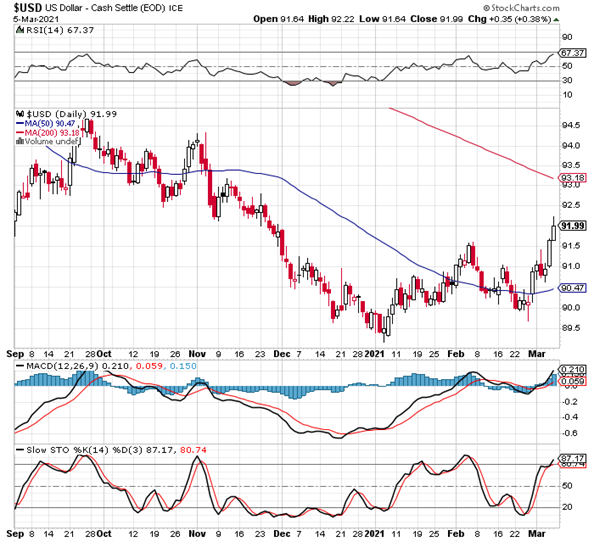 It is not just the US 10-year yield that is rising. Long term interest rates are rising globally amid mass vaccination optimism, rising inflationary pressures, and higher inflation expectations. In essence, the market is bringing forward interest rate hikes of about 75-100 bps since yields bottomed last August. Central banks will be under pressure to respond to rising yields in the weeks to come and the Reserve Bank of Australia kicked it off last week by doubling its daily bond purchases. The RBA announced it was buying A$4 billion in the 4 to 8-year range. The current target rate of purchases is $5B/week with the aim at keeping 3-year yields at 0.10%.

The Australian bond vigilantes are the first example of bond traders testing the limits of central bank dovishness. The next test was Thursday’s Wall Street Journal Jobs Summit where Federal Reserve Chairman Jerome Powell discussed the labor market, the economy, inflation, and the central bank’s monetary policy stance. Powell reiterated what he, and several FOMC members, had been saying for the past couple of weeks - the Fed was not concerned about levels of rates at this time and that the rise in yields is a response to positive expectations for a recovery. Furthermore, he indicated that the current rise in inflation expectations is unsustainable and that the Fed will advise well in advance of any tapering. Stocks fell sharply and bond traders responded by bidding up Treasury yields to more than 1.5% as Powell failed to reassure investors that inflation and bond yields would stay under control when the pandemic ends and economic activity rebounds. 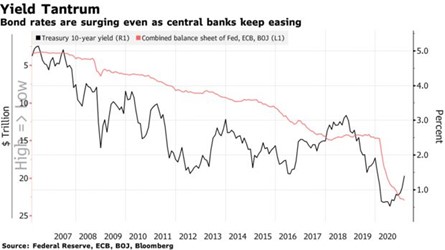 On the flip side, the other reason that bond yields have gone up is because there are less and less buyers for U.S. Treasurys here and around the world. Foreigners see the recent $1.9T spending package as yet another staggering example of the US borrowing and spending infinitely more than it earns and are calling the Fed’s bluff.

With 8 trading days before the next FOMC meeting on March 17th, I for one would not be surprised if traders try to force the Fed to adopt some sort of yield curve control to stop the 10-year from rising any further. A sell off in equity markets would tighten financial conditions, which could force the Fed into action.

In the week ahead, the European Central Bank will meet on Thursday. Unlike the Fed, the ECB is concerned about rising yields. Last week, The ECB's Villeroy de Galhu said that the ECB “can and must react” against any unwarranted rise in bond yields that threatens to undermine the Eurozone economy. Executive Board member Fabio Panetta said,

“The steepening in the nominal GDP weighted yield curve we have been seeing is unwelcome and must be resisted […] If unaddressed, this would lead to a tightening of financing conditions that is inconsistent with our domestic outlook and inimical to our recovery.”

Judging by those comments, we would expect the ECB to act. However, Bloomberg reported that unnamed officials "familiar with internal discussions" said the ECB sees no need for "drastic action" to offset rising yields. The current tools, verbal intervention, and the flexibility buying program will be sufficient.

What should we make of these comments? Could it be that the hawkish flank of the ECB doesn’t want to take any fresh action? What it does show is that there is an internal debate going on behind closed doors and the dovish camp is winning and wants to stop the rise in long-term yields? We will have to wait and see what that decision is.

Beside the two central bank meetings, there is plenty of economic data coming out soon, as well as US Treasury bond auctions for 3-year, 10-year, and 30-year. Given how terrible the 7-year auction went two weeks ago, the results will be closely watched to see if demand has improved. If the auctions are successful, then yields and the USD could move lower. 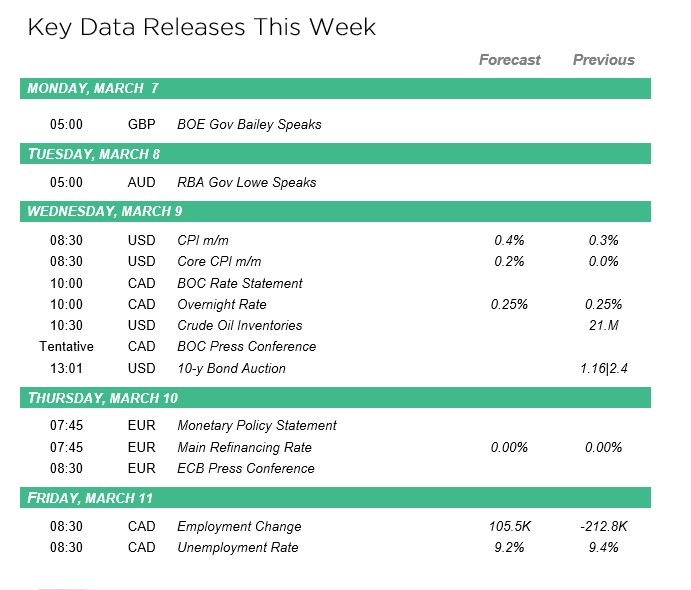