With May’s month-end flows out of the way, the currency market was fairly subdued last week with less than 1% separating the best from the worst. The USD was appropriately in the middle of the pack as the main driver for all markets, at the moment, seems to revolve around the Federal Reserve’s tolerance. Everyone has an opinion about the state of play at the Fed, especially about the current pace of $120 billion per month of QE (monthly bond purchasing program). Most market participants expect a dialing back or tapering of monthly purchases as the economy begins to boom post pandemic. In fact, the media has already circled their calendars for the annual Jackson Hole Economic Symposium August 26-28 as the likely timing for a tapering announcement. However, many Fed members have pushed back on this idea by saying that they are not even thinking about “talking about the question of tapering”. Thus, it’s not that the market doesn’t understand the Fed, but questions it. Let’s delve into this a bit more.

This Thursday, the US reports CPI and expectations for the headline YoY print to be 4.7% vs 4.2% in April and the core inflation rate is expected to be 3.2% vs 3.0% in April. These are high numbers, higher than the Fed would generally like, but the numbers are higher because they are being measured off a very low number in April 2020 when the pandemic hit. The Fed has argued that once the low base effects return to normal levels then inflation will prove to be temporary (or transitory, as the Fed likes to say).

Also, it is important to remember that the Fed has a dual mandate – inflation and employment. Fed Vice Chair Richard Clarida has stressed that the rise in inflation is due to transitory factors and he would be placing more emphasis on employment metrics in the coming months. This was an important comment, clearly making incoming inflation data almost irrelevant in the Fed's thinking and underscoring that the employment metric is more important when it comes to taking the foot off the monetary accelerator. 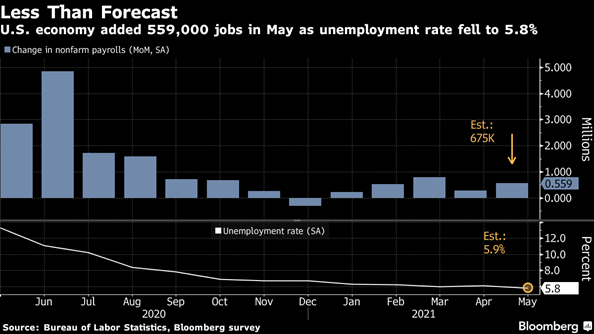 The US economy is down around 8 million jobs due to Covid and I don’t think they will get all of those jobs back before Jackson Hole when many expect a tapering announcement. In fact, the last two employment reports have been disappointing, which only underscores the Fed’s position. Last Friday’s jobs report showed that payrolls increased by 559K last month after a revised 278K gain in April. The expectation was for a 675K rise. The jobless rate dropped to 5.8%, while the labor participation rate was little changed. Just maybe, the Fed is right.

The jobs report put the USD on its back foot. The USD index burst out of the gates for the first 3 months of the year after falling around 15% in 2020. It has given back most of that gain over the last 2 months. 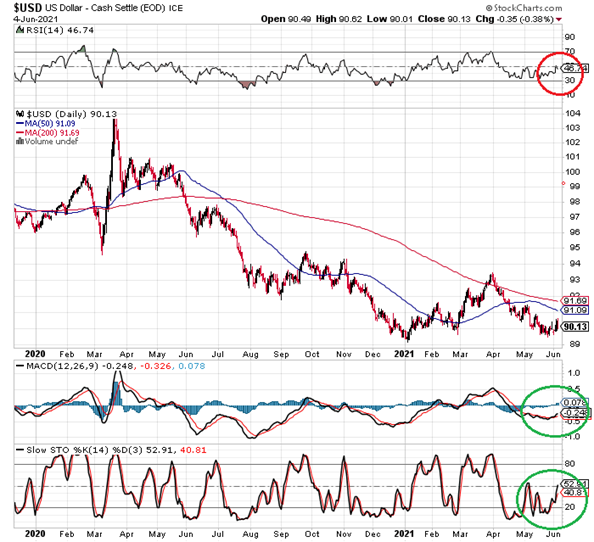 The momentum indicators are stretched and mixed, but two of the three above are pointing to more upside in the USD index. Ironically, the USD may get a boost from two central bank meetings this week.

The Bank of Canada meets this Wednesday. At their last meeting in April, the BOC broke ranks from the other major central banks by taking its first step towards monetary policy normalization by announcing that it would taper its bond buying program by 25%. Since then, the employment situation in Canada has deteriorated. The economy has lost 68K jobs in May and 78K in April. Against this backdrop, the BOC may take the opportunity to push back against the market’s hawkish view of the BOC - the market has priced in 3 rate hikes over the next two years. A third quarter taper announcement by the BOC was also making the rounds in media circles last week. I wouldn’t be surprised if the BOC took the opportunity to take the wind from behind the CAD’s back by pushing against all this hawkish rhetoric. 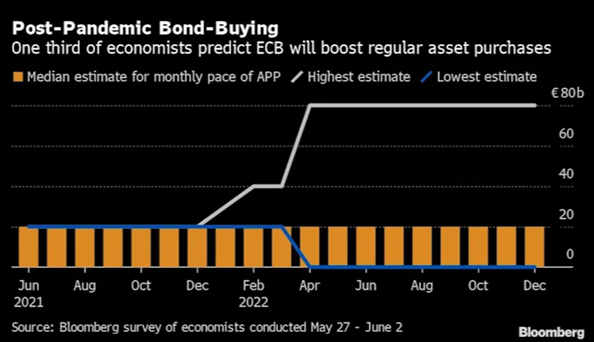 The European Central Bank meets the day after the BOC meeting. The ECB will continue to stress its dovish stance especially since the reopening of Europe’s economy is happening at a slower pace than other parts of the world, in particular because of the concern about variant strains of the Covid virus. Also, unlike some Fed policymakers, no ECB members have been pounding the table for the tapering of bond purchases. In fact, according to a recent Bloomberg poll, the ECB may push ahead with faster bond-buying through the summer to ensure a sustained economic recovery.

If these two central bank meetings follow the game plan laid out above, combined with the Fed’s tolerance of continued bond buying and shunning of taper talk, then it could re-energize a move higher in the USD. 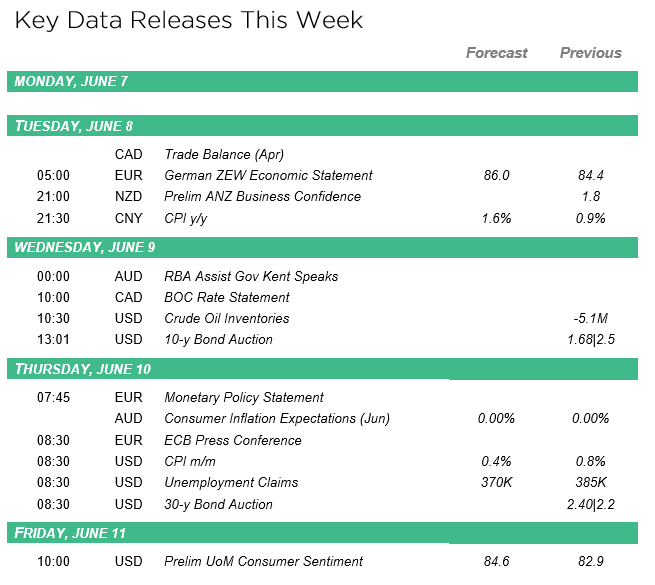