Yet no one, at least, of all politicians or central bankers, seems to care. Even the voters appear unworried. Strange times we live in, with tenacious global viruses, incomprehensible government deficits and corresponding debt loads, interest rates at a near zero or in many cases negative and a citizenry whose attitude is ‘What, me worry?’.

In the True North, a recent media release described the attitudes of a surprisingly large number of Canadians toward personal debt during a time of considerable economic uncertainty. Although this survey was conducted in Canada, the attitudes expressed likely cross-national borders. Our learned colleagues Dr. Long & Mr. Short summarised the salient points below:

Many of the respondents expressed little concern about the possibility of rising interest rates. Small wonder, seeing as central banks around the globe have conspired to suppress interest rates since the Panic of 2008 and earlier. And on the rare occasions, such as in late 2018 when the Fed attempted to begin ‘normalising’ rates, equity markets sold off sharply in response. The Fed was suitably chastened, and there has been no more talk of bumping rates up. But as my colleague pointed out last week (Painting the Chart, January 18), the bond market may have other ideas.

Speaking of central banks, the Bank of Canada, Bank of Japan and European Central Bank all delivered rate-setting announcements last week. None affected the levels of their native currencies, as the USD is still stuck, despite occasional reversals, in a strong downtrend. 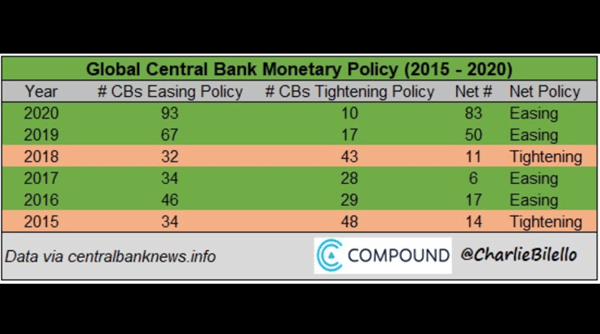 Bank of Canada was first off last week, so we shall begin our review with them.

Despite rumours of a ten or fifteen basis point ‘micro-cut’, the BOC left the overnight unchanged at 0.25%, or 25 basis points. Given the tremendous amount of government stimulus money sloshing around in the Canadian economy, the Bank declared the economy sufficiently flush to weather the pandemic-induced slowdown and not in need of further rate assistance. Frankly, at current levels, there isn’t much more that can be done with monetary policy short of going into negative rates, and the BOC appears hesitant to go in that direction. But Governor Tiff MacKlem did acknowledge that small rate cuts remain an option although not considered necessary at the moment.

The Bank’s outlook is for a quick recovery from the current Q1 contraction, presumably with widespread inoculations engendering a relaxation of business lockdowns and a corresponding rise in consumer confidence. The BOC further forecasts a complete recovery by 2023 from the pandemic-induced downturn.

On the inflation front, the Bank is concerned about possible deflationary pressures settling in, with CPI running at less than 1.0%. A target of 2.0% remains in play, although central banks generally have consistently failed for many years to achieve that goal.

The BOJ left all its policy levels unchanged but allowed itself some wriggle-room ahead of a general policy review in March. Specifically, the short-term yield curve control (YCC) target was left at -0.10%, while the 10-year YCC remained at 0.00%. 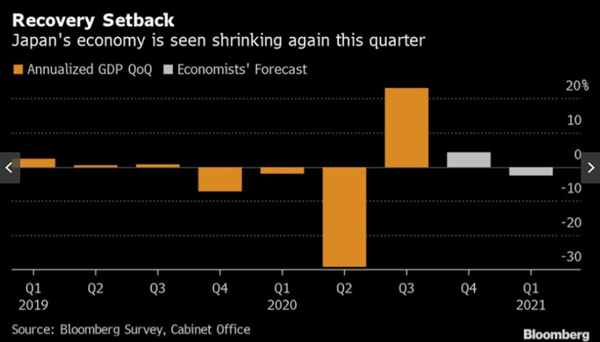 BOJ Governor Haruhiko Kuroda expressed confidence in the Bank’s current yield curve control policy and level of administered rates while taking a wait-and-see attitude on the domestic economy and the course of the pandemic. The outlook, for good or for ill, may be clearer by March.

On the other hand, Japan core consumer prices fell 1.0% in December from a year earlier, the fastest decline in over ten years. This latter has been an ongoing challenge for Japan’s central bank going on over thirty years now. Some would say a different approach might be warranted.

Like the BOC and BOJ, the ECB left all their policy actions unchanged, despite a steadily strengthening EUR which threatens to undo an already struggling recovery.

The most recent Eurozone Composite PMI Index (which really means Germany) fell more than expected to 47.5, down from the previous 49.1 and missing the call of 47.6 – and below the all-important 50.0 contraction/expansion level. Despite ECB head Christine Lagarde’s attempts to talk up the near-term prospects for the Zone, a declining greenback (which appears set to continue) may throw a spanner into her best efforts.

What’s the takeaway for players and investors nowadays? One thought that crossed our mind is that liquidity expansion (e.g. increased deficit spending, more money printing etc.) is now a function of the COVID-19 vaccine. To the extent that more people are inoculated more quickly, there will be less monetary stimulus required. The converse is likely true as well.

The swearing-in of the Biden team will probably see a normalisation of trade relationships between America and the rest of the world (read: China), while America’s numerous alliances will likely revert to a more normal footing. The positive effects of these developments cannot be overstated. As well, a successful rollout of the vaccine in America coupled with a strong stimulus package from Washington in contrast to a sputtering Eurozone might cause Mr. Market to re-evaluate his bearish view of the greenback. Only time will tell.

The coming week sees a light calendar in Canada, while America has a slew of secondary metrics along with a rate-setting announcement from the Federal Reserve on Wednesday.