The USD continued its countertrend bounce within its medium-term bearish downtrend, with only the GBP and JPY managing to avoid losses on the week. Risk aversion was the main driver as disappointing economic data, the emergence of variant strains of the virus from around the world, renewed measures (lockdown and/or curfews) to slow the spread of the pandemic, and the very slow vaccine rollout all took their toll.

The strong economic recovery that was underway in Q3 of 2020 has stalled. Disappointing US employment data the previous week was followed by news that US December retail sales fell for a third straight month, providing further evidence that the economy had lost speed at the end of 2020. The Citigroup Economic Surprise Index is bearing this out. It is showing that the economic data is no longer surpassing expectations, like it was consistently doing only six short months ago. The possibility of a double dip recession cannot be ruled out. 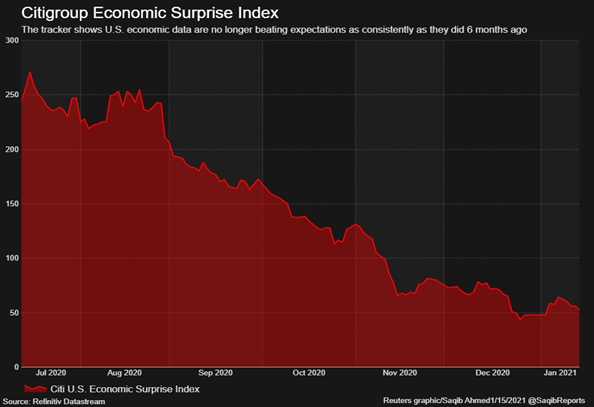 Since the start of the year, there has been a lot of talk about rising bond yields. What does the rise in yields mean? Rising yields can be attributed to rising inflation expectations, rising economic optimism, and/or a change in monetary policy. We just described how the economy has stalled in Q4, so the rise can perhaps be attributed to inflation. 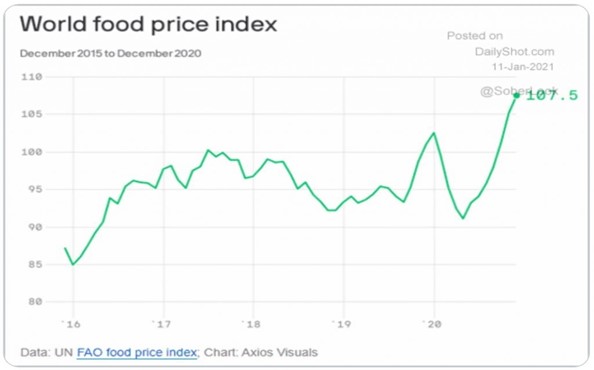 Yes, inflation is slowly rising. The key to remember here is that the data will look like it is accelerating because the low inflation rates that occurred in last year’s coronavirus-inflicted recession will enter the one-year calculation. Thus, inflation will be popping off a very low base in what the Fed typically describes as transitory. Keep in mind that the Fed has tried and tried to get inflation to 2% and has consistently failed.

So, if it is not the economy or inflation, then bond yields must be rising because of a change in the Fed’s monetary policy. Over the last couple of weeks, various Fed members have been playing up the idea of tapering QE. Consider the following recent statements:

In contrast, Fed Vice Chair Clarida and Governor Brainard each sought to assure markets that no tapering, and certainly no rate hikes are coming any time soon. Remember, the Fed has previously signaled they will hold interest rates near zero through at least 2023 and promised to keep buying bonds at a monthly pace of at least $120 billion until “substantial further progress” had been made toward the targets for maximum employment and 2% inflation.

It should be noted that the regional Fed Presidents are the ones talking tapering while Fed governors have played this down.

So, if higher inflation, economic optimism, and a tighter monetary policy are not the reasons for the sharp rise in US yields this year, what is? Well, since US 10-year yield has risen by around 45 bps since the election, perhaps the market sees a landscape of more and more debt with a new administration. This could add more treasury issuance to the equation, and fewer natural buyers for it, forcing the Fed to monetize the debt.

If the recent rise in the USD can be attributed to the rise in bond yields, then the rally is standing on shaky ground. I say this because rising yields can undermine financial stability. If the Fed wants the yield curve to stop steepening, then it must implement yield curve control. But yield curve targeting is a huge step in policy. It would distort the US Treasury market completely. So, keep an eye on this, because this is starting to get to dangerous levels. 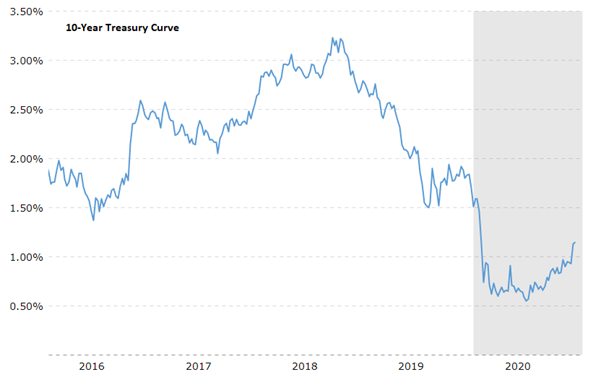 While the USD paints the chart above its recent low, its next move will depend on two upcoming events: the new head of the Treasury and the Fed meeting at the end of the month.

Markets will want to hear what the new Treasury Secretary, Janet Yellen, will say during her confirmation hearing on Tuesday. I think the old mantra of a strong dollar policy is a bridge too far for an economy that is sputtering and a financial system that would crack if the USD and interest rates were to increase. Perhaps, a move back to the pre-Trump era, the G20 mantra of letting markets determine exchange rates, would be more appropriate at this time of the cycle.

The new administration may force the Fed to adopt yield curve control as the prospect of greater government deficits driving funding needs which in turn drive further treasury supply. This could theoretically push the value of the USD lower.

The raging pandemic and lockdowns/curfews will render most of the upcoming economic data mostly immaterial. Thus, we will take our cues from central bank meetings. This week there are three central bank meetings for Japan, Europe, and Canada. Of the three, the Bank of Canada is most likely to act with a small rate cut of 10 or 15 bps. I’m not sure what such a small cut would achieve, but at least it isn’t a foray into negative interest rates.