It’s customary to start this letter with the weekly currency performance of the majors, but considering the title, I decided to go with the weekly chart of the US dollar index to reinforce what is going on in the markets. I can’t say whether the rise in the USD is the cause or whether it is the effect, but the bottom line is that it is not a good thing. The USD wrecking ball is highly correlated with slowing global growth and/or global financial crisis. Will it be different this time? Will the policymakers be able to engineer a so called “soft landing”? Maybe, maybe not, I don’t profess to know the answer.

What I do know is that when Federal Reserve Chairman, Jerome Powell, said on November 30th that he wanted to retire the word transitory to describe inflation it was the signal that the Fed was going to aggressively combat inflation with rate hikes. As you can see from the chart above that that’s when the US dollar index broke out and started to create havoc. What kind of havoc? Take a look at the chart of the Nasdaq 100, it is down about 30% since its late November high.

I bring this up because Powell said last week that “The process of getting inflation down to 2% will also include some pain, but ultimately the most painful thing would be if we were to fail to deal with it and inflation were to get entrenched”. He followed that up by saying “If things (inflation) come in better than we expect, then we’re prepared to do less, if they come in worse than when we expect, then we’re prepared to do more.”

The swaps market shows that the terminal rate for the Fed funds will be around 3.75% next year. My suspicion is that the combination of aggressive Fed rate hikes and the Fed’s balance sheet reduction (QT) will cause something to break (global recession or financial crisis) before we get rates to those levels. You can see this in the markets now. Since November, both stock and bond markets were going down together due to mounting inflation fears. Today, stocks are still falling but the bond market is rallying. This divergence is telling us that the slowdown in economic growth is more terrifying than higher inflation. This should drive down inflation expectations rapidly in the months ahead which in turn would negate the need for higher interest rates. Time will tell. 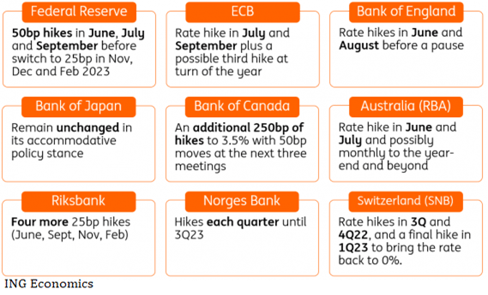 How much higher can the USD go? As you can see from the monthly chart, there’s a lot of runway left to get back to the top in early 2000s.

Have a look at the euro, it is back to rates last seen 20 years ago. If Russia shuts off gas to Europe or Europe bans all energy from Russia, then the euro could fall below parity.

Meanwhile, the Yen has already eclipsed it levels from 20 years ago.

Let’s turn to the week that was. Whenever you see that the yen is the only currency in positive territory, and be a wide margin, you know that the market was risk-off. As I mentioned before, bonds were in rally mode, but stocks, gold, bitcoin, and most industrial commodities were sold off. This should not come as a surprise – we have an aggressive Fed, the war in Ukraine, a doubling of oil prices over a year, and global supply-chain disruptions due to the lockdowns in China. About 373 million people in 45 Chinese cities are under some form of lockdown in China – this is bigger than the population of the United States. Meanwhile, people around me can’t understand why stocks are selling off. It reminds of early 2020 when we were all watching China build temporary hospitals on CNBC in response to a mysterious virus and just ignored the evidence and continued to buy stocks. 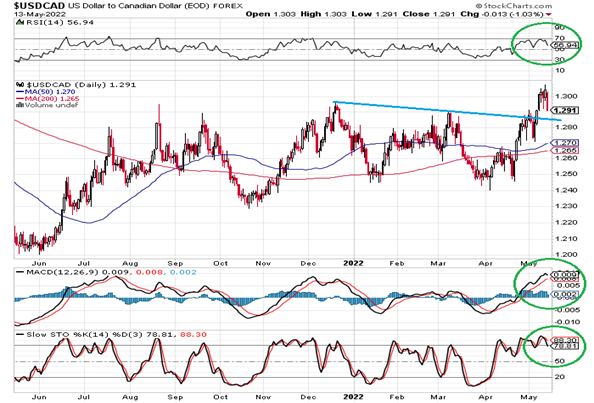 The CAD managed to eke out a gain on the week despite hitting a new low for the year against the USD. The Canadian economy is firing on all cylinders right now and its economic fundamentals is amongst the best in the G7. As I mentioned in a Reuters article last week, like most currencies right now, the CAD’s recent downtrend has nothing to do with economic fundamentals but rather the risk off sentiment of the equity market.

The momentum indicators look ready to turn lower from extreme readings. If the USDCAD rate can manage to fall back below the blue trendline at around 1.2850 then a high may be in place. An equity rally, building on Friday’s recovery, would go long way on repairing the recent damage to the CAD.
In the week ahead, all eyes will be on commentary from Fed speakers as well as data on the housing market and consumer spending for clues on the path of interest rates and the economy. The Fed has become the driving force in markets, so much so that now the market is fearing with its quest to tame inflation will result in a recession. 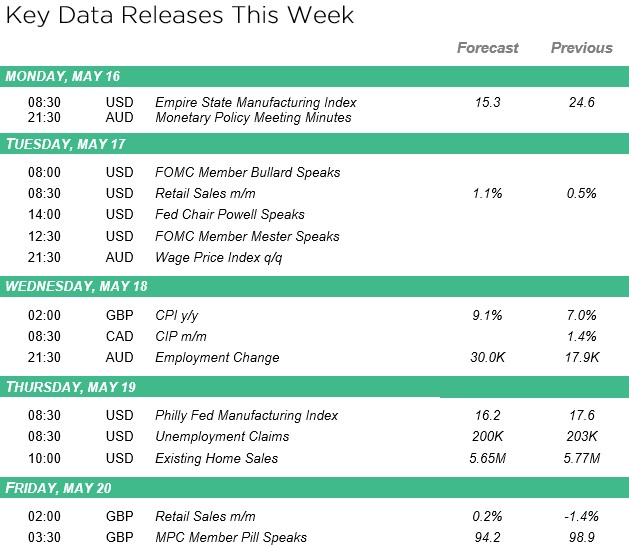