The USD was soft against all the major currencies last week, except for the GBP which has faired well since the beginning of 2021 with a gain of 0.34% on the USD and 3.08% on the euro. This was mainly due to the U.K.’s rapid vaccine rollout. It appears that trend has reached its peak after concerns relating to the safety of AstraZeneca Plc’s vaccine, which the U.K. is heavily dependent on. The European Medicines Agency's safety committee has been reviewing very rare cases of unusual blood clots in people vaccinated with the Oxford-AstraZeneca vaccine. The UK is now facing a significant reduction in supply of doses during April, meaning that older people waiting for second doses will be prioritized over younger people getting their first shot.

The slowdown in UK vaccinations comes as the EU sees a sharp increase in vaccination rates, suggesting the Eurozone's woes concerning vaccinations is coming to an end. News reports suggest that the EU now projects that there will be sufficient vaccine supplies to immunize most people by the end of June. In new projections, the five largest countries (Germany, France, Italy, Spain, and the Netherlands) will be able to vaccinate a little more than half their populations. This is signaling to markets that a strong vaccine-induced rebound lies ahead.

This dovetails nicely in the performance of the USD last week. The USD has been in an uptrend since the beginning of 2021 due to its vaccine rollout and the fact that no other country has been able to match the amount of fiscal and monetary stimulus provided by the government and the central bank. Thus, the USD has been able to distance itself from the pack by the divergence theme. Last week currency movements may be pointing to a peak in this narrative.

Last Monday we saw the most bearish session since the beginning of the year for the US dollar index. The index recorded a bearish outside day, which means the price at the open and close of the second day are outside the range of the previous day. It wasn’t lost on me that this bearish reversal happened the day after the blowout US jobs numbers, suggesting that the USD-bullish divergence narrative may be fully discounted. Furthermore, my spidey-senses began to tingle when we also had outside reversal candles in the CAD, Yen, and CHF on the same day. Therefore, there have been some noteworthy technical developments to consider.

The Citi Economic Surprise Index below shows that the rise for the Eurozone and Japan are much larger than the US. This may suggest that we are about to embark on some better economic numbers for those Covid depressed economies, especially with the help of increased vaccinations. This in turn would suggest that the US economic divergence over the rest of the global economy may be peaking and thus the USD may also be getting ready to turn lower. 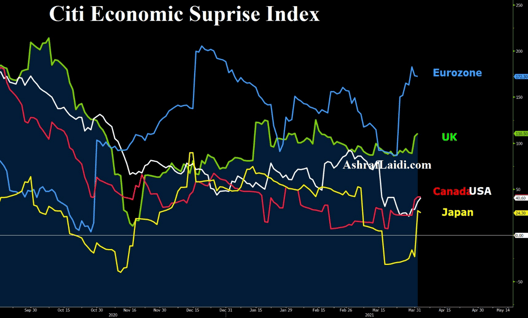 In the week ahead, the inflation scare is about to ramp up with the releases of US March CPI. Last year's negative CPI prints will be dropping out of the year-over-year measures, thus the base-effect will make for strong inflation readings. Look for Fed speakers to push the “inflation is transitory” meme from here on out. This week will also bring an interest rate decision by the central bank of New Zealand, Manufacturing and Industrial Production from the UK, Germany’s ZEW, Bank of Canada’s Business Outlook Survey, Retail Sales from the US. Plus, on Friday, China will release all their major monthly data. Also of note, there will be US 3-year, 10-year, and 30-year bond auctions. 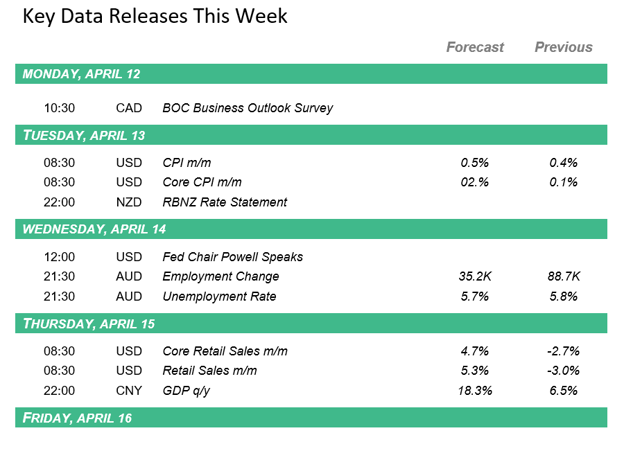