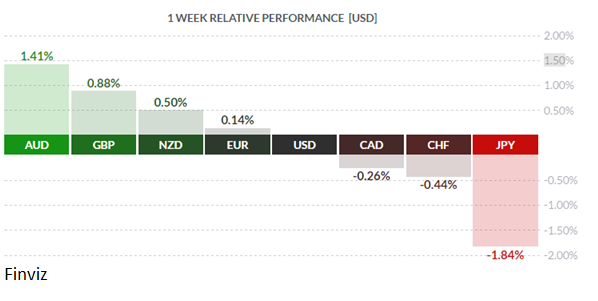 The US Thanksgiving break last Thursday provided a much-needed opportunity for market participants to, first, give thanks and then, after dinner, to attempt putting the remarkable developments of November 2016 in perspective.  Although the markets were open on Friday, both Mr. Long and Mr. Short took a couple of days off.  Nonetheless, the Dow, S&P 500 and Russell 2000 equity indices all opened at record levels, indicating that optimism still rules.

The chart below shows the relative performance of numerous asset classes since the beginning of the month.  Pre-election most were unchanged, so these movements, both positive and negative, give a good visual sense of investors’ response to the election of Donald Trump.  As can be seen, crude is largely unchanged despite all the OPEC drama (more below), the VIX or ‘Fear Index’ was the big loser (implying less equity market volatility and rising prices), and copper was the big winner.  The last is noteworthy for several reasons: Copper is a bellwether commodity, cheap, widely available and used in an astonishing variety of applications.  Strong demand for copper is generally associated with a growing economy, hence its moniker of Dr. Copper, PhD Economics.  President-elect Trump has been talking of a trillion-dollar infrastructure spending programme and Mr. Market has responded, quite rationally, by buying copper. 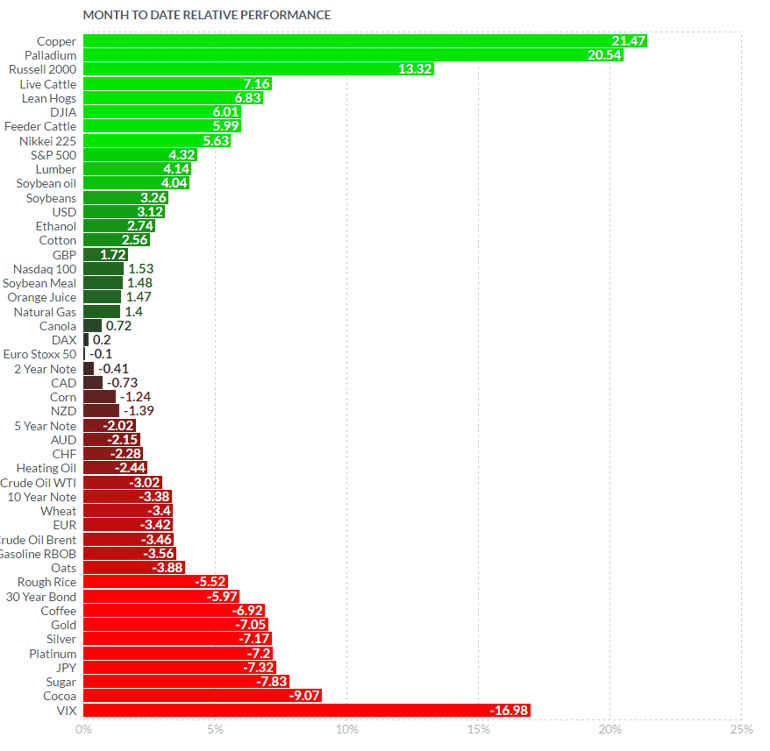 As can be seen in the same chart, US 10-year and 30-year treasury bonds were big losers, as bond traders started discounting a strong US economic recovery by selling off the fixed income market.  The fact that the Federal Reserve is now firmly poised to raise rates in December didn’t help. The upshot of all this prospective economic growth and rising rates is that the old boogeyman of inflation may be making a comeback.

It isn’t called inflation nowadays, of course.  There are still too many voters who remember the grim days of the 1970s and early ‘80s of 10%+ inflation and the harsh medicine applied to vanquish it at the time, so ‘reflation’ is the preferred term.  Essentially, the world’s central banks have been attempting, through ultra-loose monetary policy, to ‘re-flate’ or ignite economic growth and subsequent inflationary pressures in the global economy since the banking crisis of 2008.  The thinking has been that low rates will entice borrowing, growth and a resurgence of confidence in consumers over time.  This has been the strategy since 2008, even to the extent of negative interest rates, and that this has largely been a failure is evident to all, so perhaps a different approach is needed.

Which brings us back to Mr. Trump.  Monetary policy is out of ideas, so the incoming US administration is apparently committed to an aggressive fiscal policy coupled with deregulation and major tax cuts, both personal and corporate.  This may not work or it could be wildly successful or, most likely, something in between – only time will tell.  But it is a fact, however, that there is a mountain of corporate cash – in the trillions – sitting on the sidelines at home in the US and overseas in the form of unrepatriated USD profits which, under the proper reform of corporate taxation, could return home and be put to work.  Moreover, one of the criticisms of the outgoing Obama administration was its over-reliance on monetary policy and its apparent indifference to ineffective or, at worst, harmful fiscal policy.  Mr. Trump appears to be making the right noises about changing this.  Investors are voting thumbs-up.

The on-again, off-again oil production talks between OPEC members continued in the headlines.  The cartel has a general meeting slated for November 30th in Vienna and would like to have a production quota and pricing agreement in place by then.  But Russia, the largest producer outside OPEC, is playing hardball, seeking to have a quota at its current production levels – which are at a record.  Their argument is that, as Russian oil production is steadily increasing, a freeze at current levels amounts to a ‘cut’. With such logic the cartel must deal, an unenviable task. 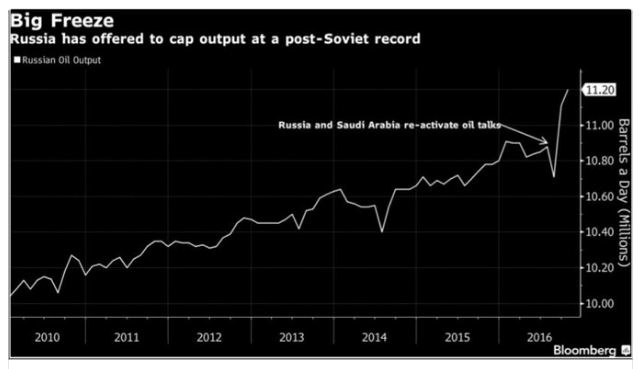 The bottom line is that a crude cut of around 1.9 million bbl/day would likely see prices rise to the high $50USD range, even assuming such a deal can be cobbled together in the next few days.  However, as mentioned in our May 30thnewsletter, American frackers – who aren’t bound to OPEC - stand ready to start producing shale oil in quantity should prices rebound to $60USD or better.  So OPEC may think it can still dictate prices, but in the words of Steve Carell in ‘The Big Short’: ‘Good luck with THAT’.

Elsewhere there wasn’t much of note in the holiday-shortened week.  Turkey and the EU exchanged sharp words over the slow progress of Turkish ascension to full EU membership.  Eurocrats had expressed dismay at political suppression instigated by PM Recip Erdogan following the unsuccessful coup of last summer; Mr. Erdogan responded by threatening to release upwards of three million Middle East refugees into Europe.  With elections set for next year in France and other EU states and a populist, anti-EU mood in the air, this is a serious threat, at least to Brussels.

Most currencies rebounded after the sell-off of the previous week, with traders booking profits before the extended Thanksgiving break. JPY continued to lag, as the Bank of Japan maintains its tight control of the Japanese Government Bond (JGB) yield curve as laid out in last week’s newsletter.

Lastly, we refer our readers once again the US Dollar Index ‘golden cross’ and its current standing. 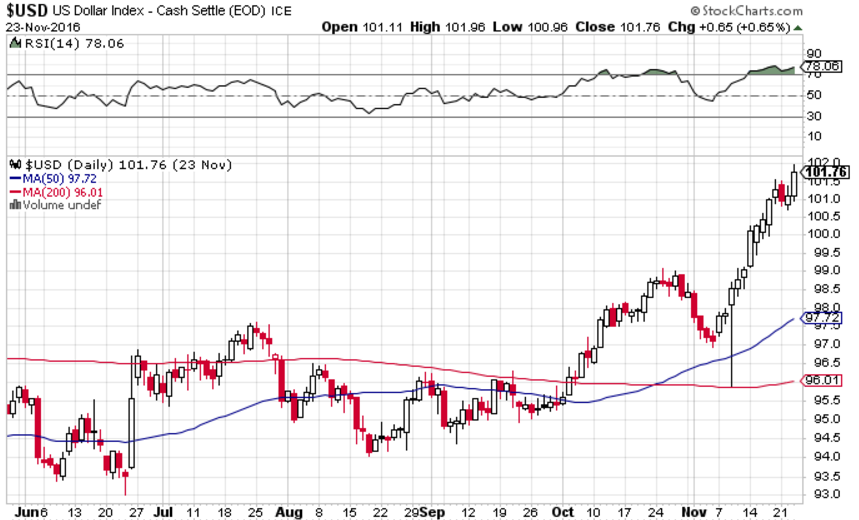 The 50 day moving average (in blue) continues to move up, up and away from the 200 day moving average.  Having said that, we want to stress that the technical indicators are stretched so a pause in the uptreand is in order for the Superbuck – or some green Kryptonite perhaps? – but for now the bullish trend appears set.