The battle between the Federal reserve and an army of jumpy bond traders continued over the past week, with the benchmark 10-year US treasury hitting a recent high yield of 1.75% and ending the week around 1.73%. Several months back we pointed out one of the prime maxims of any market player: DON’T FIGHT THE FED. Given the passage of Washington’s $1.9 trillion USD stimulus bill and the speedy vaccination of the American population (as of March 20, over 120 million citizens have been vaccinated) fears of a stronger-than-anticipated economic recovery from the Covid-induced downturn have consumed the treasury bond market and emboldened normally cautious bond traders, leading to a massive sell-off in bonds.

You may be asking - why does the bond market fear economic growth? Isn’t an expanding economy a good thing?

A rapidly growing economy inevitably leads to supply shortages, labour shortages, and the like, which invariably lead to higher prices throughout the economy. As bonds pay a fixed annual rate of interest, any rise in inflation will diminish the return on bonds (e.g. a bond yielding 7.0% and inflation at 3.0% = 4.0% actual real return).

As things stand now, the bond market is spooked both by the outlook for strong growth and the apparent indifference of Fed chair Jerome Powell, who claims the ability to keep inflation under control. Essentially, letting the inflation djinn out of the bottle with assurances all will be well. Those of us who recall the herculean efforts of central banks (not to mention governments, business, and voters) in the early 1980s, led by the legendary Fed chief Paul Volcker, to rein in the inflation beast may scoff at such misplaced confidence.

In a statement widely described in the business media as “uber-dovish”, the Fed left the overnight rate unchanged at -0.25% and all else status quo for now. In a post-statement virtual press conference, Mr. Powell sought to reassure sceptical investors about the Fed’s apparent benign neglect of inflation pressures in the domestic economy, while upgrading growth prospects and downgrading the jobs outlook. With respect to rates going forward, despite Mr. Powell saying that rates would hold steady well into 2023, players are beginning to visualise a Fed rate hike at the end of 2022. 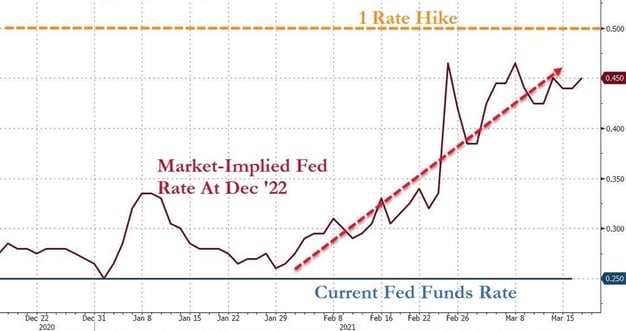 The Financial Conditions Index has been rather volatile but remains quite loose at present. 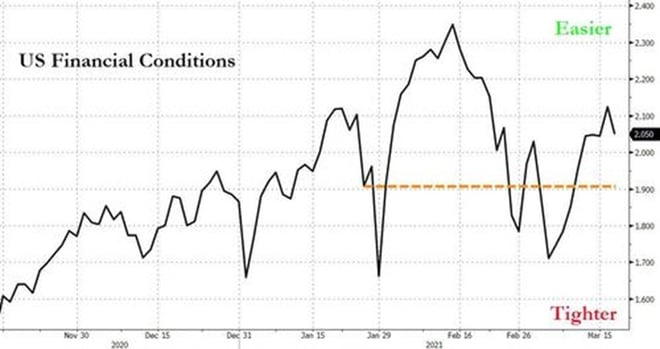 In Cool Britannia, the Bank of England voted unanimously to hold rates steady. 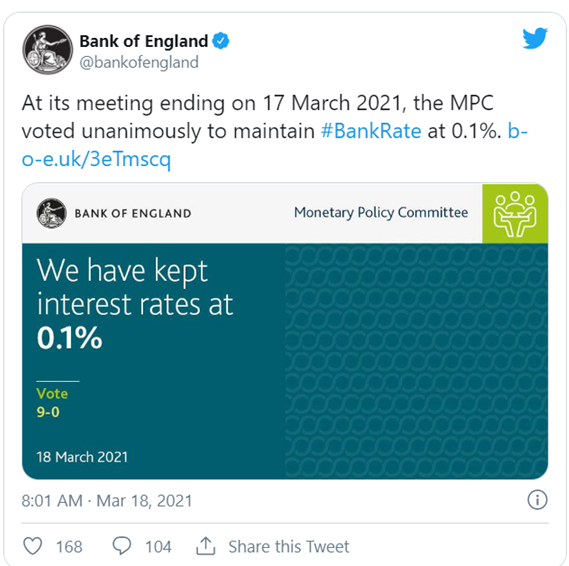 Like other central banks, the BOE has supreme confidence in its ability to control inflation, as this accompanying statement makes clear:

“…The Committee does not intend to tighten monetary policy at least until there is clear evidence that significant progress is being made in eliminating spare capacity and achieving the 2% inflation target sustainably."

The ancient Greeks had a word describing such unseemly confidence: hubris

Bucking the trend of central bank dovishness, the Norwegian central bank Norges Bank hinted at a possible rate hike in late 2021, along with two further rates hikes in 2022, bringing the administered rate to 0.75% by the end of next year.

The Bank attributed this to domestic vaccinations proceeding more quickly than anticipated, certainly better than in the neighboring EU, and the steady rise in crude prices over the past several months.

To finish up this review of central bank activity, we should mention the Bank of Japan which, in a widely-leaked statement, left all policy actions as is. Most of it amounted to a fine-tuning of its yield curve control of Japanese Government Bonds, all in furtherance of a 32-year policy to spark inflation in the domestic economy.

That these policies have been an immense failure is beyond doubt; that BOJ bureaucrats remain committed to these policies is evident; that a new approach is warranted in unquestionable. We are not holding our breath; rather, we watch in dismay as other central banks adopt these same failed policies.

One of the drivers of domestic inflation is something as mundane as shipping costs. In the US, apparently insatiable demand for foreign-made goods, especially from China, has left Asian shippers scrambling for scarce containers and room aboard giant container carriers. At the receiving end, busy ports are working flat-out to handle all the incoming “boxes” and see them off on so-called stack trains, only to come up against capacity constraints. These enormous container carriers are actually compelled to anchor offshore while awaiting berths to be unloaded, sometimes for several weeks.

The Port of Los Angeles and Long Beach, fifth busiest globally, has seen a marked increase in ships anchored offshore:

Many of these box carriers are exceptionally large, with capacity ranging from 15.000 to over 25,000 TEU (Twenty-foot Equivalent Units) and higher. This carrying capacity tied up at anchor is removed from the overall carrier space available, resulting in higher shipping costs ultimately passed on to consumers. It isn’t rocket science.

In the coming week, Canada sees no economic metrics of note, although the two most-populous provinces of Quebec and Ontario will be releasing their budgets. In America, the few indicators of note will be overshadowed by a veritable barrage of Fedspeak. 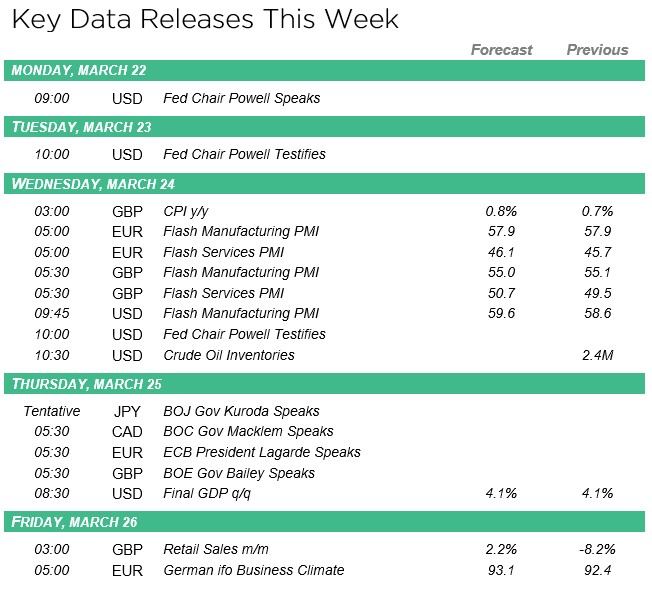