Wall Street was in a moderate risk-taking mood last week as all currencies outperformed the USD, except the CAD which was barely changed on the week. This was a bit of a head scratcher, especially against a global macro backdrop of softening PMI readings, rising oil prices, and a repricing of Fed rate hikes. The Fed funds futures seem to be implying aggressive tightening by the Federal Reserve, even though, according to last month’s dot plots, only half of the Fed members did not expect a rate hike would be appropriate next year.

The NZD was the biggest gainer of the week after the government reported a jump in consumer inflation to a ten-year high. The Reserve Bank of New Zealand already hiked rates earlier this month, and signaled further tightening to come, as it looks to keep inflation near its target 1-3% range, and to cool a red-hot housing market. The market bid up the NZD betting on more rate hikes to come from the central bank.

Meanwhile in Canada, last week’s inflation date and Bank of Canada business outlook survey portray a picture of a strong economy with lots of jobs and growing inflationary pressures. Things are progressing so well that the government announced that it was ending its broad-based covid support programs as of October 23rd. The Bank of Canada has a policy meeting this week and they will probably announce another taper of its bond buying program. The market is now pricing in 3 rate hikes for next year, that’s one more than previously thought. It will be interesting to see if Governor Macklem will confirm or push against the market’s leaning.

I don’t know about you, but I find it increasingly frustrating that policymakers continue to move the goalposts. Have you noticed how policymakers’ comments are increasingly littered with stipulations? A couple of weeks ago, ECB chief economist Lane tried to lay out how wages could rise in a one-off without leading to inflation. He called price rises “mostly transitory” but warned they are in the early stages of an energy shock. A couple days later, Treasury Secretary Yellen said on inflation: "I believe it’s transitory, but I don’t mean to suggest these pressures will disappear in the next month or two". 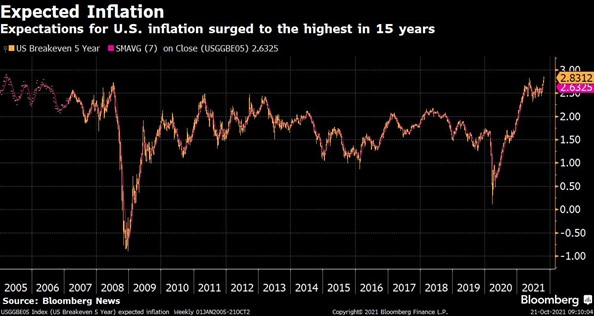 Equally frustrating is how the media covers inflation. I have yet to see an article about how the higher prices that come from inflation will be with us for ever, in most cases, even after the inflation rate has peaked. Yes, we will be stuck paying the higher prices going forward.

Don’t even get me started on the causes of the inflation. Here we are told again and again that they are due to supply chain disruptions. I find this disingenuous. Most definitions of inflation involve a comment about a general increase of prices due to higher demand. I was taught that inflation was due to a fall in the purchasing value of money. Milton Friedman, a Nobel Prize winning economist, once said that "inflation is always and everywhere a monetary phenomenon". In other words, excessive money creation spawns inflation. Do you see where I’m going with this? It is the policymakers themselves that are responsible for the inflation with their excessive money printing policies and not higher demand or supply chain bottlenecks.

Now that I have got that off my chest lets look at the week ahead. The central banks of the Eurozone, Canada, and Japan hold policy meeting this week. In addition, politics return to the fold with the UK’s autumn budget and the US attempts to finalize the details of Biden’s proposed $3.5 billion social spending plan. The US will report its preliminary estimate of Q3 GDP and it will be soft. The Atlanta Fed's GDPNow shows the US economy practically stagnated with a reading of 0.5%. It will be interesting to see how the USD will react given that the Fed will announce a taper the following week. 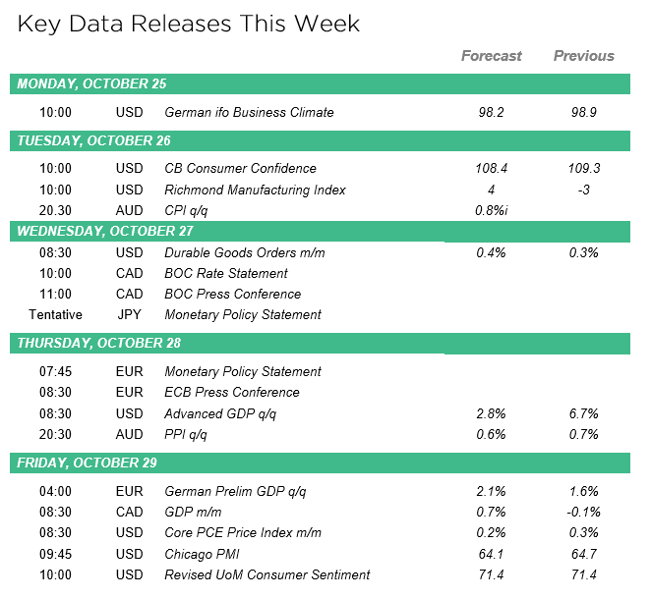