In sports, a time-out stops the game clock and allows teams to rest players, make substitutions and plan strategies. During the last week, we have had two new time-outs along with the ongoing time-out of the US government shutdown, which at the time of writing is on its 29th day, far surpassing the record for the longest of the modern era. The previous record belonged to the 1995-1996 shutdown that lasted 21 days. This is also the 21st shutdown since the modern budget process began with the Budget Act of 1974. We all know that President Trump likes to set records but we aren’t sure he wanted to own this one. He still has a ways to go to top President Carter’s record.  President Carter’s administration lost 67 days over 6 government shutdowns but keep in mind that President Trump still has two years left in his term – game on! 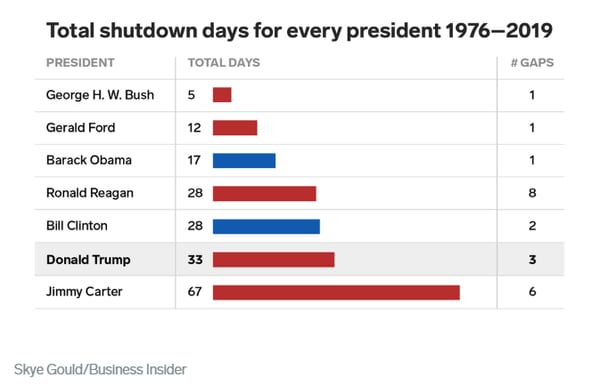 By the way, the US dollar index has rallied over the last week and the momentum indicators have turned up.  No, the dollar isn’t up because, with the shutdown, the government isn’t racking up the national debt but, rather, it is up as the shutdown has delayed economic data releases, such as last week’s retail sales, which means no news is good news. 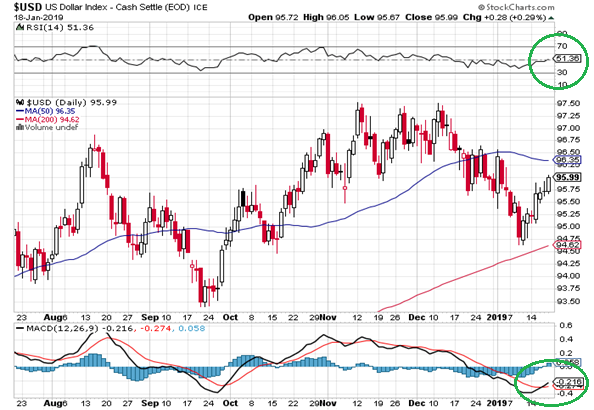 Another reason why the USD is up was due to a “Fed time-out”.  In a speech by Kansas City Fed President Esther George last Tuesday, she stated that “it might be a good time to pause our interest rate normalization, study the incoming evidence and data, and verify our current location... It is possible that some additional rate increases will be appropriate. But making that judgment is not urgent.”  These statements are important because George is the Fed's most prominent (voting) hawk and if she is calling for a pause in US interest rate normalization then perhaps the Fed is actually done with its tightening cycle.

The most dominant news item last week was the Brexit trainwreck and, here again, a time-out was called.  As you may already know, Prime Minister Theresa May’s Brexit withdrawal agreement was defeated in a parliamentary vote by a stunning 230-vote margin, making it the worst defeat for a British government since the 1920s.  Unfortunately for May, this was just the beginning, as on the following day the leader of the opposition called for a no-confidence vote. However, May’s government won the vote in the House of Commons by a margin of 325 to 306. So her Brexit plan was defeated but she was still able to survive the no-confidence vote – why? Because no one really wants her job – no one wants the hot seat and remarkably no one has a counter-proposal to her plan.  May now has until Monday to present a new Brexit plan to Parliament.

As it stands now, it seems more likely than ever that the leaving date of March 29th will be posponed. The most contentious part of May’s plan was an insurance policy known as the "backstop" designed to prevent the reintroduction of border controls between the U.K.'s Northern Ireland and the Republic of Ireland, an EU member state. Assurances from EU leaders that the backstop is intended as a temporary measure has not worked, thus May  will have to come up with an alternative solution to avoiding a hard border. Having said that, there are two other solutions – hold a second referendum or leave without an agreement (a hard Brexit).

With all this negativity around Brexit, would it surprise you to know that the GBP was the top performing currency on the week? That’s because most of the negativity was already priced into the exchange rate. The pound will continue to hold firm as long as a hard Brexit is avoided.

The week ahead will offer reminders that monetary diverengence is still alive and well. The USD should continue its rally as monetary policy meetings in both Japan and the Eurozone reinforce the point that those two central banks are still effectively in the dovish camp. The Eurozone economy is struggling and risks are rising to the downside. As soon as President Trump is finished with China he will turn his attention to Europe and ratchet up trade tensions. As for the Bank of Japan, speculation is rife that it will lower its inflation target – with inflation currently at 0.7%, this would be seen as dovish.

Also this week, all eyes will be on China as it releases retail sales, industrial production and GDP data. Chinese officials have been rolling out stimulative measures to halt the current economic slowdown. If these numbers miss the mark, markets will get very nervous as a slowdown in China usually rattles investors around the world.