Once again, the USD was the big loser on the week, barely beating out the hapless JPY (didn’t we say that last week?) while CAD was the top dog, just topping both CHF and EUR. After winning this competition for the past three weeks, NZD had a long overdue correction while analysts became increasingly glum on the future outlook for the greenback. We also saw some interesting economic metrics while equities continued rallying strongly. Let’s try to make some sense out of all these disparate developments, shall we?

We should start with Canada, as it outperformed all of its competitors. The loonie traded in a tight range earlier in the week, as September GDP and the Q3 measure both disappointed. Analysts had called for a mth/mth rise of +0.9% and a Q3 read of +47.6%. Both numbers came up short at +0.8% and +40.5% respectively, leading some to question the strength of Canada’s economy post-lockdown.

Wobbly oil prices certainly didn’t help, as OPEC members finally agreed to a small +500K bbl/day increase in the overall production quota. (Traders had anticipated a 3 to 6 month freeze in production). However, Canadian November jobs numbers released on Friday were rather good, certainly better than in the US, and that helped the loonie rally into the finish. The street had called for a rise in jobs of +20K (previous +83.6K) and the rate rising to 9.0% from the prior month’s 8.9%. As it turned out, Canada created a net of +62.1K new jobs, with full-time positions rising +99.4K and part-time falling -37.3K – excellent numbers. The jobless rate also declined to 8.5%.

Earlier in the week, Finance Minister (and Deputy Prime Minister) Chrystia Freeland laid out the Liberal government’s fiscal report and, not surprisingly, it was awash in red ink with the fiscal 2020 deficit forecast at -381.6 billion.  (The one decimal point accuracy is, frankly, spurious). Next year is not much better: 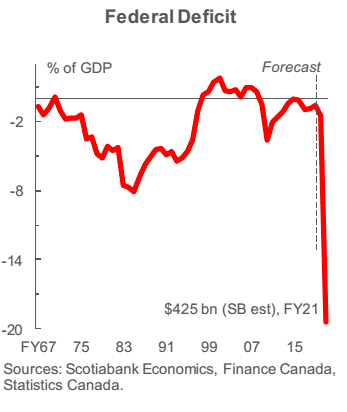 Despite these staggering projected deficits, for now at least, traders like the loonie.

In the US, things are becoming somewhat more downbeat. Some key measures of manufacturing continued to display mixed results. The Markit US Mfg PMI rose to 57.7 as predicted from the prior 53.4  (the highest in over six years) while the widely-watched ISM Mfg PMI declined to 57.5 from the previous 59.3 and missed the call of 58.0 by analysts. 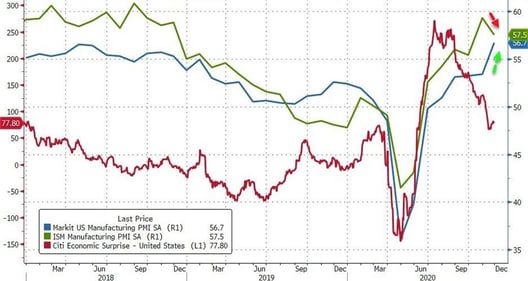 Which brings us to last Friday’s disappointing November US jobs numbers.  The ADP number released last Wednesday was an ill omen of things to come, with the final result of +307K jobs coming in well below analysts’ expectations of +440K. The weekly jobless claims numbers, despite declines in recent months, revealed that over 20 million Americans are still filing for some sort of assistance. 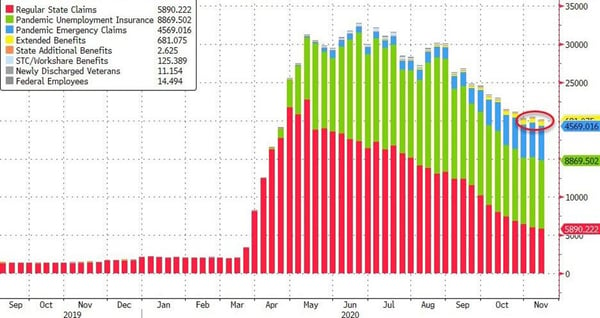 Friday’s jobs numbers continued this grim drumbeat. Analysts had called for a rise in jobs of +460K vs prior month’s +638K, and the jobless rate declining to 6.8% from the previous 6.9%. As it emerged, jobs created were well below forecast at +245K while the rate did drop to 6.7%, although that isn’t necessarily a good sign (discouraged jobseekers dropping out of the labour market).

Initially, markets sold off on this news. But Mr. Market eventually realised that such weak economic numbers may compel Washington lawmakers to get on with an appropriate stimulus package – yet another example of bad news being good news – so RISK ON. This led the Dow Jones Industrial Average and other equity indices to set yet more record highs on Friday.

To sum up, then, the greenback is falling out of favour for three major reasons:

FUN FACT: One of the many reasons for projected USD weakness is the fact that so many greenbacks have been created this year. According to analysts at NORDEA in Helsinki, almost 20% of all USD – 3 trillion - were printed in 2020. 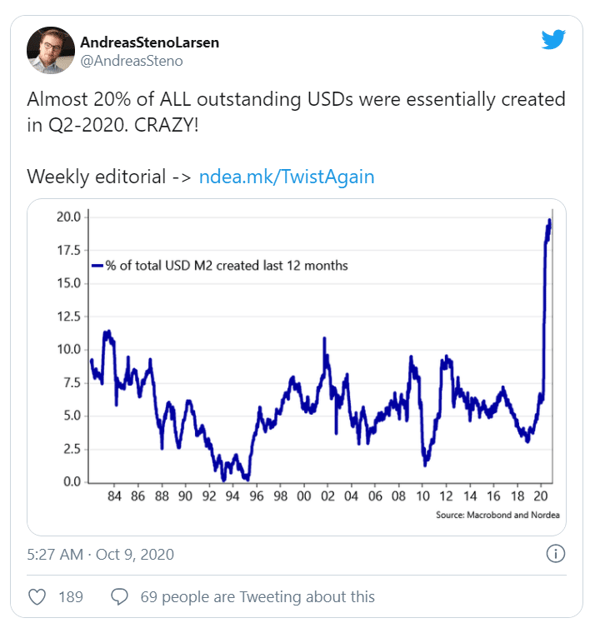 EUR was one of the winners on the week, although the reasoning can be construed as backward. 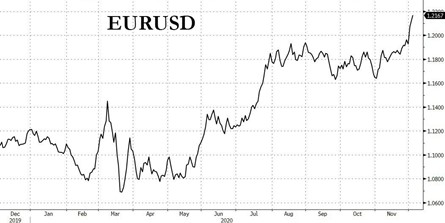 For some time now, since the European Central Bank initiated a negative interest rate policy back in June 2014, the level of 1.2000 in EUR/USD was considered all the ECB would tolerate in terms of a strengthening EUR. Now it appears the ECB may let the unit rise to 1.2200, leading players to speculate that the central bank no longer has any arrows in its quiver (i.e. it has run out of policy options).

The harmful effects of negative interest rates on European banks have been well-documented, so if American authorities are taking a benign view of greenback weakness (in hopes of sparking a domestic economic rebound), the ECB may find itself in a difficult spot.

The on-again, off-again BREXIT negotiations between the UK and the Eurozone continued to play havoc with GBP. At last report, the talks were “paused” while both sides re-considered their positions. Still, persistent greenback weakness ensured sterling would gain on the week despite these tiresome talks dragging on. At the time of writing, talks look to be in danger of collapsing.

The coming week is light on metrics, with only US inflation numbers on tap. Canada sees a Bank of Canada rate announcement on Wednesday, with the overnight rate expected to hold steady at 0.25%.