It’s official, they have a name for it now. The worst economic downturn since the Great Depression, caused by the coronavirus pandemic, has been labeled the Great Lockdown by the International Monetary Fund. In its semi-annual report, the IMF estimates that global gross domestic product will shrink 3% this year, far worse than the 0.01% contraction amid the Global Financial Crisis of 2008. For the optimists, the IMF anticipates growth of 5.8% next year, which would be the strongest on record dating back to 1980. However, it cautioned downside risk. Much depends on the longevity of the pandemic, consumer behavior, and related stresses in financial markets. Even if the IMF’s forecast proves accurate, it is important to point out that economic output will undershoot their pre-virus trends through 2021, which means that the economic recovery will not be V-shaped. 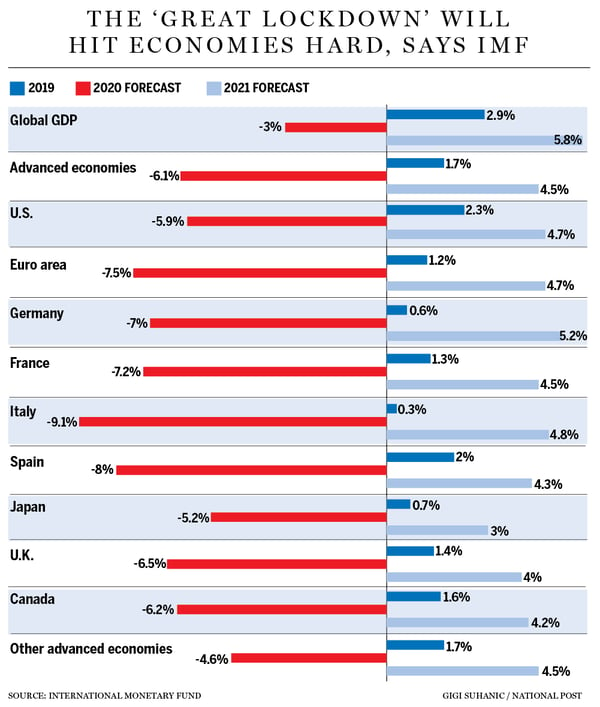 For the pessimistic side, the IMF sketched out three alternative scenarios in which the virus lasted longer than expected, returned in 2021, or both. A lengthier pandemic would wipe 3% off GDP this year compared to the baseline, while protraction plus a resumption next year would mean 8% less output than projected in 2021.

The IMF’s forecast spells trouble for last week’s OPEC+ historic deal to cut oil production. Days after the deal was agreed to, President Trump said that OPEC+ was looking at cutting 20mb/d, not 10mb/d. That 20mb/d figure would include several million in US production cuts, which President Trump is in no position to order considering that the companies are not government owned. Unfortunately, it will take somewhere between 20 and 35mb/d cut in production to offset the plunge in demand. As the deal currently stands, OPEC+ claims to be cutting 10mb/d but this is based on the February baseline which Saudi Arabia and others were already pumping full out in response to the price war. The reality is that OPEC+ is lowering production by 4.3 mb/d from February levels, which is insufficient to address the fall in demand and limited storage space. It does not matter at this point, because the law of supply and demand will find the proper equilibrium in the weeks ahead.

Last Friday, China released a slew of economic data which showed that the world's second largest economy shrank by 6.8% in Q1 compared to a year earlier. Here are some of the key highlights: retail sales crashed by 20.5% y/y, industrial production collapsed by 13.5% y/y, and fixed asset investment plunged 24.5% y/y. The retail data showed that sales were down across the board, with restaurants and catering down 43.1%, clothing down 30.9%, and jewelry down 41.1%. Numbers like these are no longer market-moving because we know the current situation and we are becoming used to them. Having said that, they do tell us something about human psychology and economic behaviour after a severe economic downturn – you can open up the factories and start producing again, but as you can see in the retail sales data, it’s a lot tougher to restore consumer confidence that has been so badly shaken.

Meanwhile, in the currency market, the yen was the top performer and may be a sign of things to come as the Fed’s backstop of all things credit has snapped the USD advance. The Fed’s monetization policies have caused US yields to fall, taking away one of the dollar’s recent advantages. Currency analysts at various banks are forecasting a rise in the yen to 100 in Q2. Furthermore, the time leading up to Japan’s Golden Week of holidays through May 6th tend to encourage repatriation of yen. 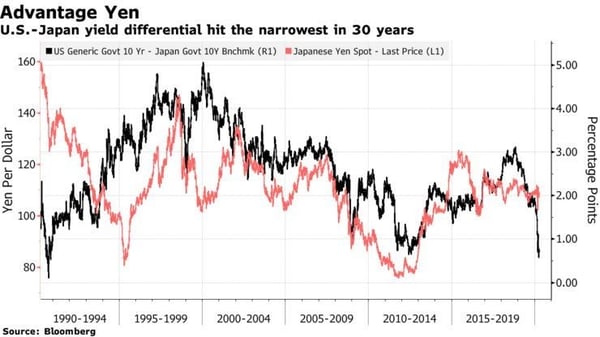 At the other end of the spectrum, the New Zealand dollar was the worst performer on the week on comments from Reserve Bank of New Zealand Governor Adrian Orr. He said that negative interest rates at the RBNZ are still on the table, while more direct financing to help support monetary conditions are possible. The central bank has already slashed the OCR interest rate to a record 0.25%, a significant development considering that just a year ago New Zealand commanded the highest interest rates in the G10 currency sphere.

Elsewhere, the CAD, which had been up 6 of the past 7 trading days going into Wednesday’s Bank of Canada meeting, managed to fall by 0.33% on the week. The BOC surprised the market by announcing that they would extend its asset purchase program to include corporate bonds, provincial debt, and T-bills. The bank also warned that the economy is headed to its sharpest contraction on record and that economic output could shrink between 15% and 30% by the end of Q2, compared to the end of 2019.

On the technical side, the USD/CAD rate is trading within a falling wedge pattern. This pattern usually resolves itself to the upside, which would by bearish for the CAD versus the USD. Key support lies at 1.3750 and resistance is at 1.4350. Confidence in a higher USD is supported by the momentum indicators that are flattening and the fact that the 5-day moving average has curled up and looks to cross through the 20-day moving average in the weeks ahead. 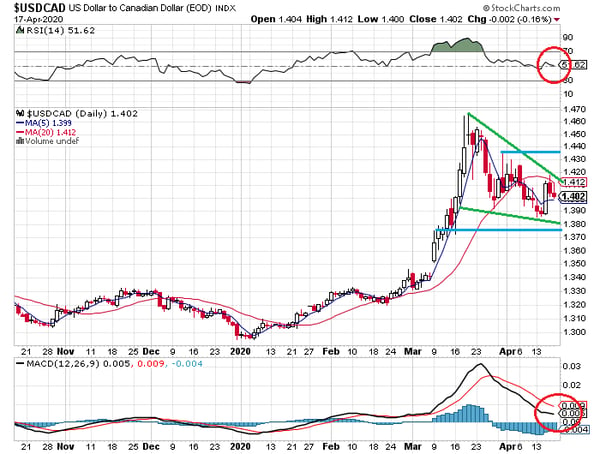 In the week ahead, there are many economic data releases and no major central bank meetings but, as we have mentioned before, they are not useful at this point. We all know that economic activity is down dramatically due to the Great Lockdown. However, there is evidence of hope as some European countries are discussing re-opening of schools, while the US discusses the possibilities of “re-opening” some states as early as May 1st.