The two biggest headwinds of 2019 - a hard Brexit and the US/China trade war - will no longer be a concern by the end of this month. The UK will officially leave the EU on January 31, some 3.5 years after voting for it in a referendum. The hard Brexit (leaving without a trade agreement) has been avoided for now with a temporary agreement in place until the end of the year. New trade talks have already begun. That’s the good news; no more speculation of another referendum, the UK is leaving the EU. The bad news? Prime Minister Johnson’s government has set a deadline of December 31, 2020 to hammer out a comprehensive trade agreement. Johnson wants a similar deal that Canada and the EU entered in 2017. The problem is those agreements took 5 years to negotiate and the UK only has 11 months. That said, the market doesn’t seem to appreciate that a no-deal Brexit has not been removed, but that’s a problem for the second half of the year.

Barring any last-minute hiccups, the US and China are due to sign their “Phase 1” trade deal this coming Wednesday. The deal isn’t as comprehensive as President Donald Trump first envisioned, hence the tag “Phase 1”, but it is the best he could come up with before the November Presidential election. In fact, the deal isn’t much different than the one which Treasury Secretary Steven Mnuchin struck with the Chinese in the summer of 2018, which was rejected by President Trump. Furthermore, the deal, which calls for China to buy $200B more of US goods over the next two years, may actually violate current WTO rules because China’s share of US imports will rise at the expense of other countries; but that’s a battle for the courtroom.

With this in mind, the first half of 2020 was looking good until the US government’s assassination of Iranian Maj. Gen. Qasem Soleimani by a drone strike on January 2nd. Iran vowed to strike back after the General’s funeral. Iran’s retaliation was a show of force to their people, but their missile attacks purposely missed targets to avoid human casualties, with the tragic exception of the mistaken strike on civilian Flight PS752 which killed all 176 passengers and crew.

While the odds of a full-scale war have been reduced, they are not zero. The escalation and de-escalation in tensions can be seen in the performance of the yen. When tensions rose, the USD fell against the yen in a safe haven move. When tensions subsided, the flows reversed course and the yen gave back all its gains to the USD.

The de-escalation in military tensions between Iran and the US, Brexit, and the signing of the US/China trade deal has put global central bank easing on ice for H1 2020. Lending credence to this idea was the fact that the December industrial production reports for the Eurozone’s four largest economies (Germany, France, Italy, and Spain) surprised to the upside, supporting ideas that the troubled sector is stabilizing.

This dovetails well with the December release of OECD’s global leading indicators which continue to point to stable growth momentum in the OECD area, but with growth remaining below trend in all major OECD countries and most large emerging economies. The composite leading indicators are designed to anticipate turning points in economic activity relative to trend six to nine months ahead. 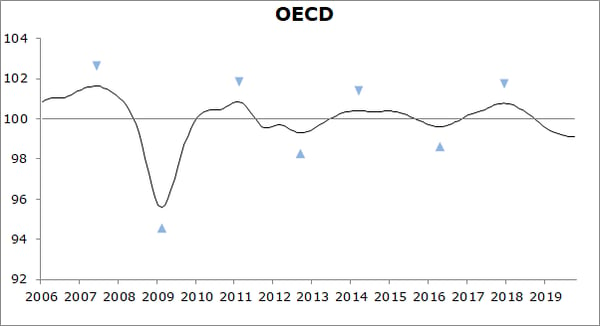 Incoming economic data should help confirm a positive outlook for the first part of the year. With that in mind, next week’s data highlights for the US (the Empire State and Philadelphia Fed manufacturing surveys, the Beige Book, and inflation readings) will support the Fed’s view that monetary policy is on hold because the economy is in a good place.

In the UK, reports for inflation, trade, industrial output, and the service index will be gleaned for any sign of Brexit hangover, especially after weekend comments by Bank of England policymaker Gertjan Vlieghe. He said that he “really needs to see an imminent and significant improvement in the UK data” or he is going to vote for a rate cut. For its part, China is due to report lending, trade, retail sales, industrial production, and Q4 GDP. Please view the schedule below for next week’s data releases which should move currencies.