Stuck in the Middle

Last week witnessed a large number of US economic releases, a key Canadian release as well as an upbeat speech by Mario Draghi, head of the European Central Bank.  Additionally, we had a lengthy chat with our friend the bond salesman, after an absence of several weeks – more on that below.

Let’s take a closer look at these afore-mentioned numbers, beginning in America.  Inflation numbers – both October PPI and CPI - were above or matched analyst’s rather high expectations.  PPI came out at +2.8% vs call of +2.4% while CPI printed +2.0% vs call of +2.0%, the latter continuing a trend of +2.0% or better in recent times.  Another key indicator, Retail Sales, surprised to the upside at +0.2% vs call of flat, although it was still well south of the previous +1.6%.  Other numbers indicated an economy that continues to grow at a reasonable clip and can withstand further hikes in the overnight Fed Funds rate, so the long-anticipated December rate hike is a likely reality.  On Capitol Hill, further support for the USD came in the form of successful passage of a tax reform bill by the Republican-dominated House, in a vote of 227 to 205.  The bill now heads to the Senate for further review, but by no means is its passage assured.  President Donald Trump has made clear his desire for this legislation to be enacted before year’s end; time is beginning to run out. 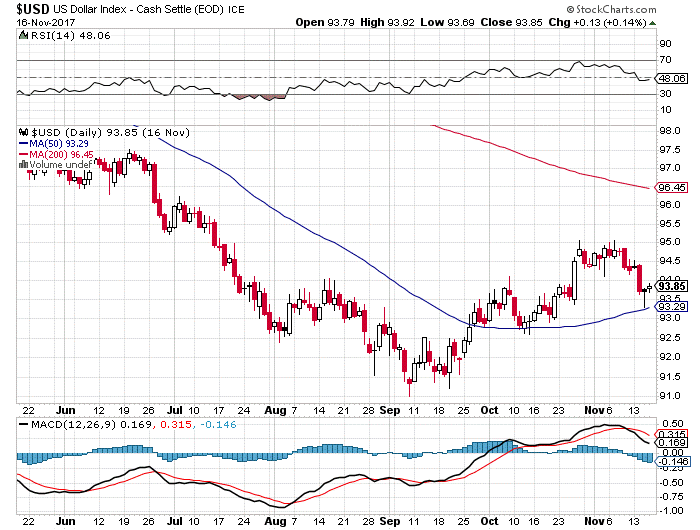 US dollar index USDX – ‘Steady as she goes'

In the True North, release of soft inflation numbers and dovish remarks by Deputy Governor Carolyn Wilkins were sufficient to send the loonie sharply lower.  October CPI printed at +0.1% vs call of +0.2%, while the year/year number showed at +1.4% against the call of +1.5%.  Additionally, the loonie is being hit by faltering NAFTA negociations and a (possible) major house price correction in the major Vancouver and Toronto urban markets.  The dovish tone evinced by Ms. Wilkins seems appropriate, in her remarks that the bank would take a ‘wait and see’ attitude for now.  Mr Market took that as a cue that a December rate hike is now a no-go, and hit the loonie hard.

The two biggest losers on the week were the ‘Down Under’ or ‘Antipodes’ currencies – the Australian and New Zealand dollars.  Aussie fell on declining metals prices and a credit slowdown in China, its major trading partner, while Kiwi fell on declining commodities prices and growing uncertainty over the direction of its newly-installed Labour government.  Leftists there appear set on requiring the nation’s central bank, the Reserve Bank of New Zealand, to begin targeting full employment along with low inflation, similar to America’s Federal Reserve.  Additionally, changes may be made to the Acts governing the RBNZ which may allow political meddling – not a good thing.  Investors sold the Kiwi in response.

The EUR was the runner-up on the week, gaining ground on the greenback despite the ECB leaving rates unchanged and continuing with bond purchases, although the latter had been halved to 30.0 bln EUR monthly.  Strong growth in zone paymaster Germany, with third-quarter growth registered at +0.8% helped raise zone-wide growth to +0.6% and, at least for now, that’s better than Trumpland.  Additionally, ECB chief Mario Draghi gave a very upbeat speech on Eurozone economic prospects.  Our learned colleagues Dr. Long and Mr. Short noted and summarised the salient points in his speech as follows.

‘The euro area is in the midst of a solid economic expansion. GDP has risen for 18 straight quarters, with the latest data and surveys pointing to unabated growth momentum in the period ahead. From the ECB’s perspective, we have increasing confidence that the recovery is robust and that this momentum will continue going forward.'

M. Draghi also laid out the Bank’s view of the near future:

This was the speech of a confident central banker, and investors responded by buying up the Euro.

Earlier we mentioned we had a chat with our friend the bond salesman.  Although the credit markets can be viewed as both ‘pokey’ yet ‘arcane’ at the same time still, given enormous government deficits, it is the market and has enormous but generally unclear influence on foreign exchange markets.

We caught up with our friend after a recent issue of US Treasury bonds which went well, especially in the 30-year maturity.  In response to our question about the skittishness of bond traders, the salesman confirmed that it was still generally true, but traders had recently grown increasingly confident in the Fed’s ability to control inflation. So confident, in fact, that the yield curve had largely flattened.  As we looked puzzled, he explained that the yield curve extended from the overnight Fed Funds rate – currently 1.25% - out to the longest treasury maturity, the 30-year bond – currently yielding 2.80%.  In other words, for extending term out from one day to 30 years (!), investors gain just 1.55% in yield.  A paltry amount indeed, which might actually be decreasing further.  Several factors are at play here, the salesman continued, including demand from insurance companies for long-term investments, continued QE buying by foreign central banks pushing buyers into treasuries, increased 2- and 5-year issuance by the US Treasury Dept. etc.  The upshot here, as we understand, is that a flattened or even inverted yield curve (short-term rates above long-term rates) has historically been a harbinger of economic recession. 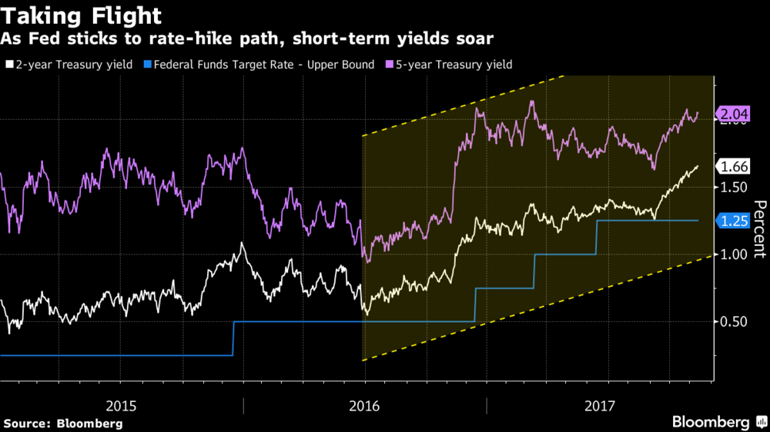 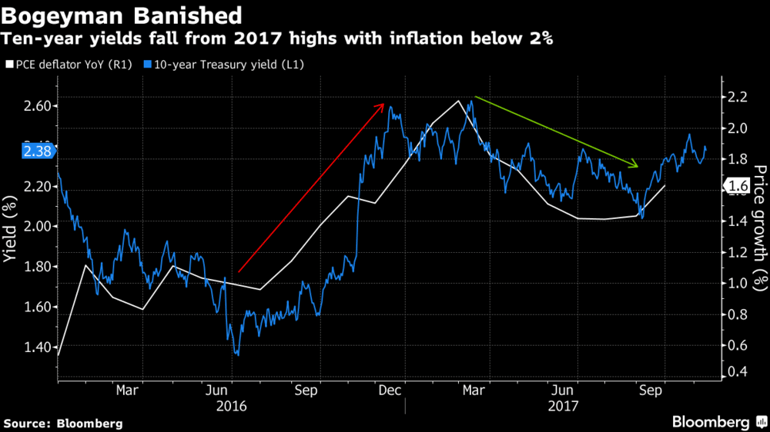 In the coming holiday-shortened week, five days of statistics will be compressed into the first three days.  Happy Thanksgiving to all our regular American readers!