Return of the Bond Bears

During these very strange days of the interminable Covid-19 pandemic, it has become increasingly clear that there is a wide divergence between countries regarding vaccination rates. This will have significant impact on their domestic economic re-opening rates, and thus on government deficits and central bank actions to support the respective domestic economies – more below.

Additionally, the once-feared “bond vigilantes” have made a (welcome?) return recently, especially last week which saw a sharp rise in treasury yields – more below.

By virtue of its strong rally since the beginning of 2021 and increasing investor acceptance, Bitcoin (BTC) has earned a regular spot in this weekly discussion. These days, the leading “crypto-currency” appears unbeatable – more below.

Lastly, economic statistics released last week in the US, coupled with growing optimism about the domestic vaccination campaign, are leading analysts to mark up their expectations of a strong US recovery. Let’s get started! 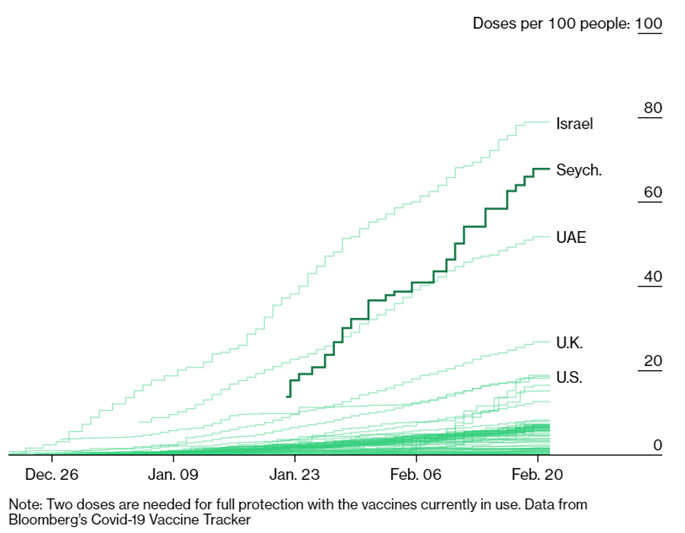 Israel currently leads the pack with close to 78% of its population having been “jabbed”. (Being a small country is ofttimes advantageous.)

America is clearly not wasting any time, with an average vaccination rate of 1.3 million per day. The Biden administration has made noise about upping that rate to 3 million which, if implemented, would advance markedly the country’s exit from the current lockdown.

The horse race between America and China – which the US currently is leading – reflects political competition between the two superpowers. On the one hand, Washington is determined to exit crippling lockdown conditions sooner rather than later and get the economy back on the rails. On the other hand, the communist regime in Beijing seeks to lead global economic recovery during celebrations planned for this year to mark the centenary of the founding of the Chinese Communist Party in Shanghai on July 1, 1921.

Canada sadly lags in vaccinating its citizens, having thoroughly bungled the vaccine file at the federal level. As of February 19th, a total of only 1.441 million citizens had been jabbed, leaving the country ranked no. 41, with a vaccination rate of a mere 3.97 per 100 citizens. This snail’s-pace rate has potentially negative implications for the CAD going forward. (As evidence of the failed roll-out, it is worth noting that Canadian PM Justin Trudeau was crowing recently about a shipment of 1.5 million vaccine doses arriving in three weeks. The United States vaccinates that many citizens daily.)

Firm economic metrics in America, coupled with rising optimism over an earlier-than-expected exit from economic lockdown, gave bond traders a bad case of the shakes. As we’ve discussed previously, bond traders love economic weakness and central bank intervention intended to suppress interest rates, especially at the short end of the yield curve. But the real economy is re-asserting itself. The rapid pace of vaccination has led some analysts to bring forward their estimates of when so-called “herd immunity” will be achieved in the US. Op-ed headlines like this in the Wall Street Journal badly frightened bond traders – a jumpy lot at the best of times:

Mr. Market promptly whacked the benchmark ten-year treasury and the rest of the curve mercilessly, pushing yields back to levels not seen since last year. 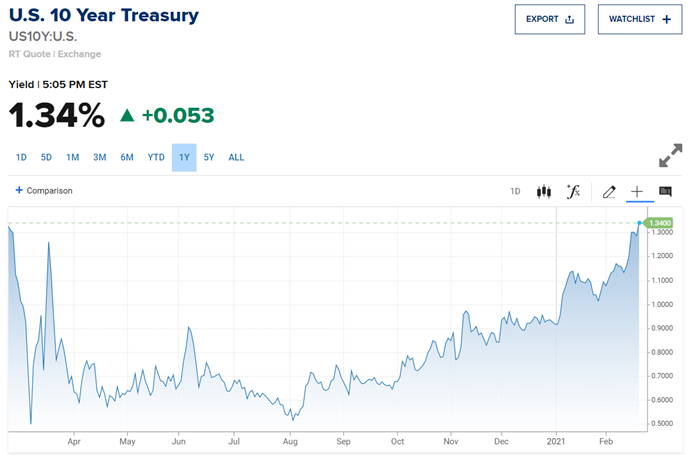 None of this helped the greenback, although a reviving economy may prod the Federal Reserve to if not raise rates, at least start discussing the possibility. Regardless, while inflation appears quiescent for now, the Fed (despite its talk of targeting a 2.0% inflation rate) isn’t actually targeting inflation at all. It is targeting growth, and that may be stronger (and sooner) than the Fed anticipates. (Economies have a funny habit of doing that sort of thing, upsetting the predictions of our betters.) This initial sell-off by the bond vigilantes may be a shot across the bow of the Fed; a warning.

“To the moon, Alice”

Investors have watched Bitcoin in amazement in recent days, as it has set one all time high after another, almost like clockwork.

The reasons aren’t hard to find, as the pioneering digital currency enjoys broader acceptance among institutional players. PayPal and Square were among the first to begin amassing positions in BTC, followed by BTC proselytizer Michael Saylor of MicroStrategy and the charismatic Elon Musk and Tesla, which took a sizeable position just recently. Other major players joining in are MasterCard, Morgan Stanley, and custodian bank BNY Mellon. The fact that BTC, at current levels, has a market capitalization of 1.0 trillion+ USD is also drawing investor interest.

The “Bond King” Has Spoken

The reality that gold has been slipping in price, rather than rallying against USD weakness has perplexed many traders. Some speculate that BTC is now gaining more widespread acceptance as a store of value supplanting gold’s traditional role in that function. Perhaps, but as we have pointed out in prior newsletters, BTC is still in price discovery mode. There will likely be considerably more volatility going forward until a true market value is determined.

Last week saw an eclectic mix of statistics, along with a goodly amount of Fedspeak. Of the latter there was nothing of note, the speakers sticking to the agreed-upon script. 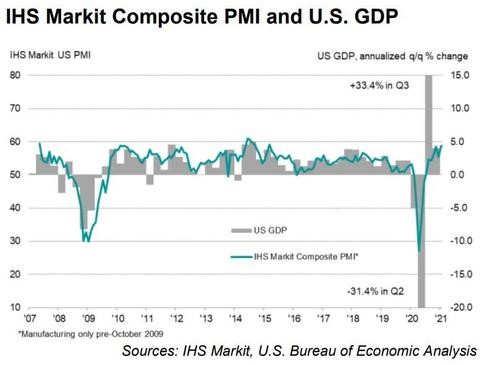 From a global perspective, America appears to be leading the pack: 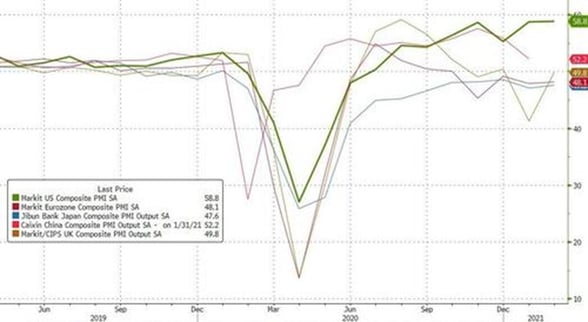 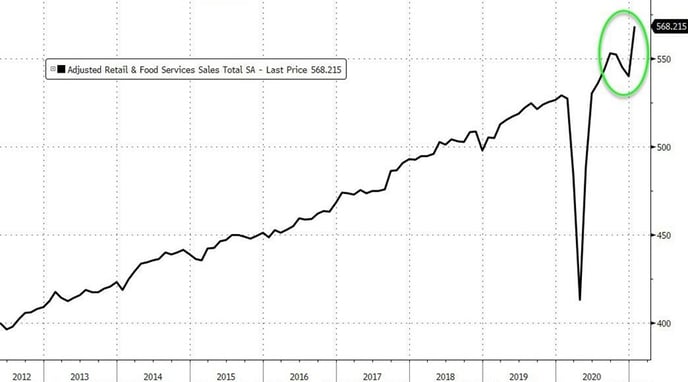 Strong retail sales, a rapidly improving factory sector, a speedy vaccination process leading possibly to an earlier-than-expected herd immunity and re-opening of the US economy – small wonder bond traders hit the bids and headed for the exits.

In Canada, in line with the generally downbeat nature of the pandemic response and over-reliance on strict lockdowns, it was no surprise that December Retail Sales fell well short of expectations. The headline number was called to decline -2.3% and was actually worse at -3.4%. The ex-autos number disappointed as well, called at -3.0% and emerging at -4.1%. On the inflation front, January CPI was called at +1.0% yr/yr - exactly where it was reported. Coupled with the recent disastrous labour market report, there appears to be little zip in the Canadian economy at present.

BOTTOM LINE: The CAD has rallied, not on any intrinsic strength in the Canadian economy, but because of USD weakness. The divergent economic performance between Canada and America, coupled with the badly trailing vaccination rate in Canada, could eventually hurt the loonie. Vast government deficits may persist that much longer, and the Bank of Canada might be forced into using unorthodox policy prescriptions.

The week sees little in the way of relevant metrics for Canada. However, the major Canadian banks will be releasing their quarterly earnings, and investors will be watching closely for any sign of takebacks of loan loss reserves set aside over the past year, as well as the banks’ general outlook for the coming quarter.

In the US, numerous measures of note are forthcoming, along with a full slate of Fedspeak and Fed chair Powell’s testimony to congress on Tuesday and Wednesday. 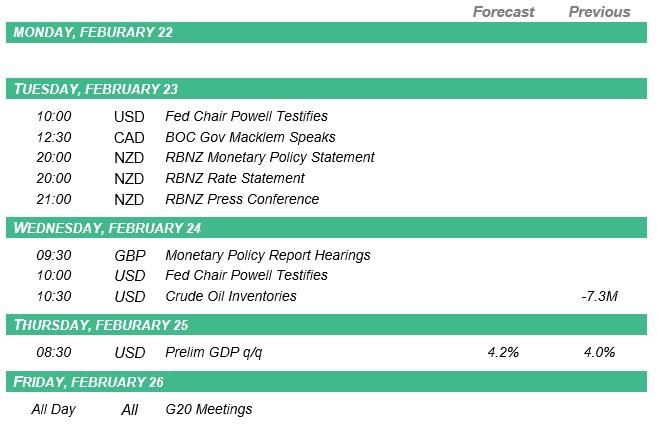