What a difference a couple of weeks make – over the preceding weeks there’s been a lot of positive headlines from both the UK and the EU that both sides may be more open to compromise in Brexit talks.  However, in the previous week the tone from the UK began to change as they suggested that they had done all they could and that the EU needed to stop revisiting previous positions. Thus, it isn’t surprising that at the start of the week the contentious issue of the Irish border flared up again. It looked like the EU seemed to be willing to agree on UK rather than EU inspectors at the Irish border, but the UK refuses to accept the EU’s insistence on customs checks in the Irish Sea if there isn’t a free trade agreement after Brexit.

Prime Minister Theresa May’s Brexit plan, also known as the Chequers Plan, is for the UK and EU to share a "common rulebook" for goods, but not services. She insists that it is the only credible way to avoid a hard border between Northern Ireland and the Republic of Ireland.  What did European Council President Donald Tusk think of the plan – well, judging by his Instagram post, he suggested that that the UK cannot "cherry-pick" elements from the EU rulebook.

Twenty-four hours after the rejection of her plan by the EU, Prime Minster May held a press conference and went on the offensive accusing the EU of not treating the UK with respect. She said that Donald Tusk alleged that our proposals would undermine the single market, but he didn’t explain how in any detail or make any counter-proposal.  Then she pulled a Trudeau, stating that “no deal is better than a bad deal”, which are the words that Canada’s Prime Minster, Justin Trudeau, has said about NAFTA negotiations. These words spooked the currency markets stoking ‘no deal’ fears and caused the GBP to lose all of the gains that it had built up during the week, falling 1.5% against the USD, its biggest one day drop this year.

Moving to the other big story of the week; is the continuing downdraft in the US dollar index over? We think that the turn in the index is near and may come this week after the Federal Reserve policy meeting. The index has fallen in five of the last six weeks and a lot of ink has been spilled trying to explain the fall.  The reasons most cited are US economic data misses, global trade wars, midterm elections shifting the House majority from the Republicans to the Democrats, the increase cost of financing US debt, and the likelihood of a dovish turn at the Fed.  With all due respect, the downdraft in the US dollar index is just a pause and next week’s FOMC meeting will help the market to refocus its attention to the reason why the dollar index has been moving up since mid-April – monetary divergence. Besides, if the opposite were true then you would expect the Japanese yen to lead the charge higher and, as you can see in the relative performance chart for last week, the yen was the weakest performer falling by almost half a cent against the USD.

The Fed will hike this week, this is 100% factored in.  According to the CME FedWatch tool, the market is also pricing in a 78.4% chance of a rate hike in December.  Thus, like always, the most important information will lie with what the Fed has to say.  As you may remember, at the June meeting it took one Fed member to move his or her dot (forecast) to lift market expectation from one to two more rate hikes for the balance of 2018.  Having said this, all eyes will be on the median 2019 dots.

The set of dot plots from the June FOMC signaled three more rate hikes in 2019 and only one rate hike in 2020. If this were to transpire then it would put the fed funds rate at 50 bps past the neutral level for rates.  Remember, that just over a couple of weeks ago, Fed President Brainard who is traditionally a dove suggested that the Fed could continue to raise rates beyond the long-term neutral rate. This is important to watch because if there’s an upward revision, we could see a pretty sharp upward revision in interest rate expectations and in the USD itself. 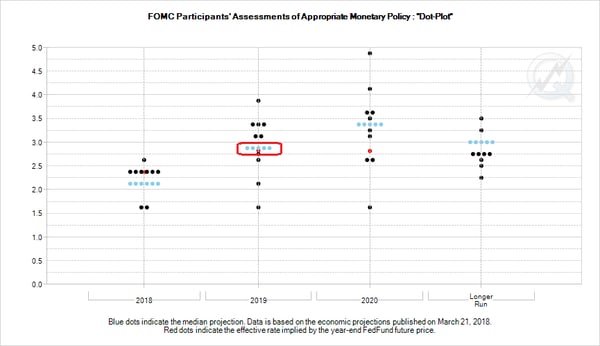 Lastly, the continuing saga of NAFTA 2.0 negotiations. Deadline after deadline has come and gone without a deal. This time around, the deadline to reach a deal is September 30th in order to have the outgoing President of Mexico to sign it into law before he leaves office on December 1st. It would also allow the current US Congress to pass it before the new Congress takes over.  However, the Trudeau government has its own deadline, Monday October 1st – this is the date of the Quebec election which the reduction of Canadian dairy tariffs would impact the most. The price action in the CAD clearly sees that a deal is imminent. Having said that, don’t be surprised if President Trump weighs in on Twitter with some price moving comments.