The “Principle of Least Regret" is an excellent path to make decisions, especially binary ones - given a choice between X and Y, and given all the facts and experience and self-knowledge currently at one's disposal, which option will you look back on in future with fewer/lesser regrets?

I bring this up because last week I came a across this principle in the policy statement of the Reserve Bank of New Zealand after they raised the official cash rate by 50 bps to 1.50%, a level not seen since June 2019. The RBNZ stated that “the Committee agreed that their policy ‘path of least regret’ is to increase the OCR by more now, rather than later, to head off rising inflation expectations and minimise any unnecessary volatility in output, interest rates, and the exchange rate in the future.”

The path of least regret is an important statement because it exemplifies the mindset of central banks and national governments in this high inflation environment. A consensus has formed, and the market recognizes it - governments wants lower inflation at almost any cost and their central banks will need to hike rates to achieve this. Thus, both parties want higher interest rates. 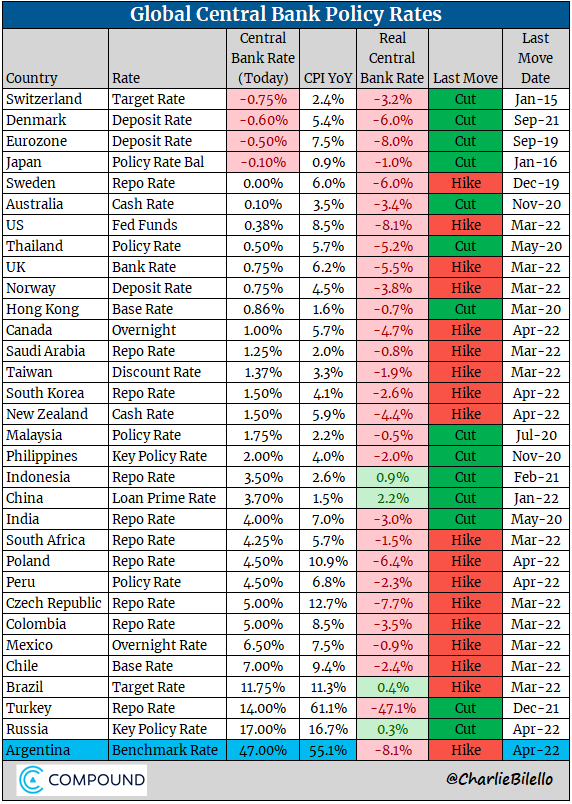 To emphasis my point, just look at what St. Louis Fed President James Bullard said on April 7th. He said the central bank is “behind the curve” on interest rates. He said that markets pricing in 3.5% rates by 2023 was “a bit slower” than he anticipated, and that “inflation is too high” and the Fed needs to act. Bullard said “US inflation is exceptionally high, and that doesn’t mean 2.1% or 2.2% or something. This means comparable to what we saw in the high inflation era in the 1970s and early 1980s. Even if you’re very generous to the Fed in interpreting what the inflation rate really is today … you’d have to raise the policy rate a lot,” Bullard lamented.

Don’t make the mistake in thinking that the Fed will not crash the stock market with high interest rates – the so-called Fed put. Think again people, with high government debt and budget deficit; coupled with talk that the US government has weaponized the US dollar with its sanctions on Russia that less and less countries would be willing to buy US debt; and the Fed buying less government bonds with its soon to be announced reverse QE; crashing the stock market will cause investors to run to the safety of US debt.

It's not just the stock market that could get recked, it could be the economy as well. Remember, the inflation that we are experiencing now is mostly due to supply chain disruptions – so supply side, not the demand side of the economic equation. Interest rate hikes will not solve supply side issues, they only act to tamp down on demand. Thus, demand destruction is the only way to stop inflation from getting worse.

With this in mind let us have a look at would central banks have been up to. Eight banks have hiked rates thus far in April and 11 did so in March.

The Bank of Canada was front and center last week when it delivered its second-rate hike of the year, this time it was a 50 bp hike bringing the bank rate to 1%. The BOC also announced that it will stop recycling maturing bonds and allow its balance sheet to shrink. Over the next 12-months about a quarter of the bonds bought on net basis during the pandemic (CAD 350 bln) will roll-off. The bank lifted its inflation forecasts, it now expects CPI to average 5.3% this year, up from the 4.2% forecast in January. Next year's forecast was lifted to 2.8% from 2.3%. The central bank lifted the neutral rate to 2.50% from 2.25% and suggests that is where it was headed. The market has recalibrated the BOC’s hawkish stance and now sees 50 bps moves at its next two meetings.

The European Central Bank also held its policy meeting last week. The ECB indicated that it would stop purchasing net new bonds in June, which will clear the path for its first rate hike in July.

Staying in European continent, the market has dialed back its expectations for the Bank of England. The BOE is expected to raise the bank rate by 25 bps for the next several meetings. This seams reasonable since they were the first G7 central bank to start its rate hiking cycle last year.

Meanwhile, on the Australian continent, the Reserve Bank of Australia is expected to begin an aggressive tightening campaign right after next month's national election. The market has priced in almost 190 bps of hikes by the end of the year. Meanwhile, across the Tasman Sea, the Reserve Bank of New Zealand has been the most aggressive central bank. As mentioned at the beginning of this note, the RBNZ hiked by 50 bps last week. The other 3 hikes were all 25 bps moves which started last October. The market has priced in another 170 bps before the end of the year. There is plenty of data in the week ahead, but it is important to remember that given the emphasis of this higher inflation shock, new data is unlikely to alter the central bank’s rate hike paths.