Wednesday’s Federal Reserve announcement was the key driver of the week.  These are the headlines that streamed on trader’s screen at that moment:

The media pushed the change in the Fed’s dot plot as the big story - 12 Fed members now expect a rate hike in December versus 4 who believe rates will stay unchanged. Also, one Fed member sees two more rate hikes before the end of the year, or a 50 bps rate hike in December.  Furthermore, the dots showed that the Fed has every intention to hike rates 3 more time in 2018.  Thus, the Fed meeting was branded as unequivocally hawkish and sent the USD soaring against all of major currencies.

One notable economist, David Rosenberg of Gluskin Sheff, didn’t see the Fed’s announcement as hawkish - citing that the Fed lowered its 2017 inflation figures (core PCE) by 20 bps, while also lowering 2018 expectations by 10bps and eventually reaching 2% in 2019.  More importantly, the Fed lowered its long term expected funds rate forecast, which was cut again to 2.75%, the lowest ever.  Yet this interpretation is not getting a lot of airplay. 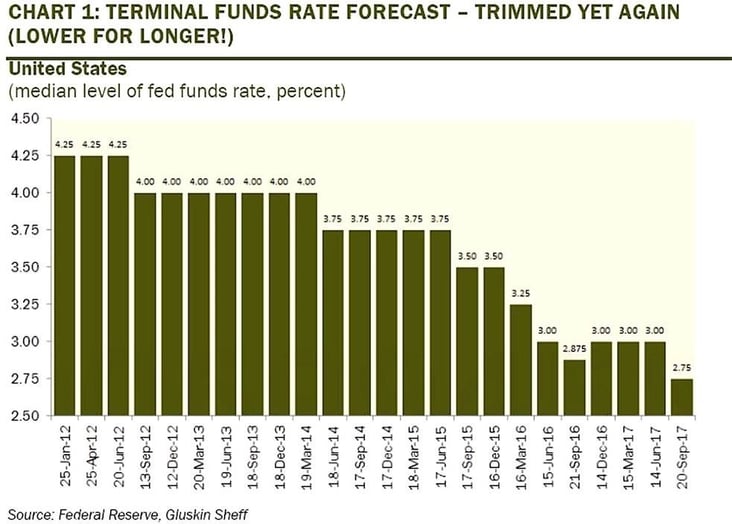 Mr. Market has had a hard time believing the Fed and the above chart clearly validates that point as the Fed’s forecast has consistently been revised lower.  Having said that, if the Fed is able to lift rates at least two more times in the next six months, then that would be more than any other central bank and could be enough to place a sustained bid under the USD.  We will find out with the passage of time.

To us, the most interesting part of the Fed announcement was that it will begin rolling off its enormous balance sheet starting in October, an unprecedented move in central banking history.    Remember, the Fed purchased bonds after the 2008 financial crisis to try to sustain a frail economy over a series of three QE (quantitative easing) operations – which saw the Fed's balance sheet balloon to $4.5 trillion from less than 1 trillion before the great financial crisis.

The plan is to not sell any bonds, which could roil markets, but rather to gradually trim the balance sheet by not reinvesting the proceeds from some of the bonds as they mature.  Starting in October, the plan is to begin rolling off $10 billion of debt, $6 billion in Treasury securities and $4 billion in agency debt each month through December; and gradually increase the cap to $50 billion within 12 months.

By laying out the game plan, the Fed would have you believe that the whole balance sheet roll off operation will be no ‘big deal” as it will simply be on autopilot quietly working in the background.  Colour us sceptical, the balance sheet roll off is essentially QE in reverse – i.e. QT, quantitate tightening.  If QE was money printing then QT will remove excess cash out of markets.  This will tighten monetary conditions and remove liquidity from the financial markets.  QE unleashed animal spirits and caused the stock market to increase by over 270% since March 2009.  Furthermore, at the end of all three QE programs the stock market went down by 17%, 20%, and 10% respectively.  So, I have to ask, can QT possibly be a benign event?  With the benefit of hindsight, we will find out, soon enough.

The Fed wasn’t the only game in town last week.  The New Zealand dollar managed to lead all currencies last week as polls showed that the governing National Party, the centre-right party which has governed since 2008, up 6 percentage points at 46% while the main opposition party, Labour, was down 7 percentage points at 37%.

At the other end of the spectrum, the CAD was the poorest performer on the week as a pair of softer domestic economic reports poured cold water on an October rate hike.  Retail sales beat expectations rising by 0.4% in July; however the increase was far more modest as volumes declined by 0.2%, which suggests economic growth was likely flat in July.  The annual inflation rate rose to 1.4% in August from 1.2% in July, slightly short of forecasts for 1.5%. With inflation still below mid-range target, the Bank of Canada has scope to undertake the tightening very gradually. Market odds of an increase in October declined to 37.7% from 41.6% just before the data, though traders still see an 83% chance of a hike in December.  Also, comments by Deputy Governor Lane earlier in the week encouraged the market to think again about the likelihood that it would deliver three hikes in three consecutive meetings. These facts could be enough of an excuse for more of a correction in the CAD in the coming week. Canadian GDP is due for release at the end of next week as well as a speech by BOC Governor Poloz on Wednesday.