Last week all evidence pointed to a continuation of the strong US economic recovery. Canada appears to be tagging along for the time being while central banker-speak from Bank of Canada Governor Stephen Poloz spooked Canadian debtors. Let’s take a closer look.

The big numbers were released last Friday – US and Canadian employment.  Stateside the numbers continued strong with a net of +250K jobs created (call +190K) while the jobless rate held steady at 3.7% as expected. The two-month net job revision was zero while wages grew a strong +3.1% yr/yr, the highest since 2009.  While the widely watched purchasing managers index (ISM) came in at just 57.7 – below the call of 59.0 – still the number was well above the breakeven mark of 50 and players left unchanged their expectation of further Fed rate hikes – or should we say ‘normalisation’?

The plentitude of jobs being created in the booming Trump economy (Crash! Bang! JOLTS! Oct 22/2018) has left Americans feeling rather confident about their near-term prospects.

That is absolutely correct. Conference Board consumer confidence reading emerged at 137.9, the highest since 2000 and easily topping the call of 136.3 called for by analysts.

In Canada, jobless numbers came in a touch better than expected, with a sizeable increase in full-time jobs. The rate declined to 5.8% while full-time jobs rose +33.9K and part-time jobs declined -22.6K, for a net gain of +11.3K jobs. But the quality of jobs improved, and that’s the important thing.

So what’s this whole ‘northbound’ thing? Simply put, interest rates are headed north, a process better described as normalisation with America, as usual, leading the way. As mentioned above, market players still expect several more Fed rate hikes over the course of the next year, while in the True North, BOC chief Poloz made clear the Bank’s desire to raise rates in Canada.  Ever since his installation as BOC boss in 2013, Mr. Poloz has suffered, perhaps unfairly, from the perception that he favours a weak CAD. As he was head of the government-run Export Development Corp (EDC) for several years prior, the suspicion that, as BOC governor, he would favour a weak loonie to promote exports was widespread. Last week, though, Mr. Poloz made clear his desire to move rates higher. Testifying in Ottawa to MPs on Tuesday, the governor defended the Bank’s recent hike of the overnight rate to 1.75% and made clear that the era of ultra-low interest rates in the Dominion was over.  (After ten years, some would say about time). He praised what he termed the economy’s ‘resilience’ and some restoration of certainty with recent completion of the USMCA, and added that he felt the current level of rates was ‘still too stimulative for the improved economy’. He would like to see the overnight rate climb to what he termed the ‘neutral range’ of 2.50% – 3.50%.

For those of us of a certain age, remembering rates in the teens back in the early ‘80s, even these levels mentioned by Mr. Poloz as a distant target sound absurdly low. But with America booming and the Fed hiking, Mr. Poloz has little choice. The loonie traded in a tight range in response.

The Eurozone certainly has its share of problems these days. The EURO has drifted lower with news of zone political boss Angela Merkel intending to resign her chancellorship while budget bickering continues between Brussels and No. 3 zone member Italy. An inconvenient fact: French banks own 277 billion EUR of Italian government debt, an amount roughly equal to 14% of French GDP. If the zone economy was healthy, governments could grow out of these debt problems, but the opposite is true: 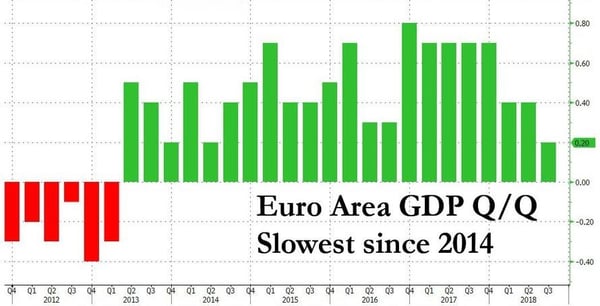 Slowing growth obviously complicates efforts by the ECB to join the Fed and BOC and others in normalising rates, so no wonder the EUR under-performed on the week. Analysts maintain that growth of less than +0.3% each quarter would delay any rate moves by the ECB – hardly bullish for the currency going forward.

In Cool Britannia, the Bank of England left rates unchanged in a unanimous 9-0 decision. Evincing a slightly hawkish tone, the Bank forecast stronger GDP growth from late 2019 with inflation expected to continue above target.  BREXIT remains a known unknown for now. Sterling had a brief knee-jerk reaction, then settled back into recent trading ranges.

Fun Fact: The World Bank puts global 2017 GDP at around $80 trillion USD.  How is it distributed? 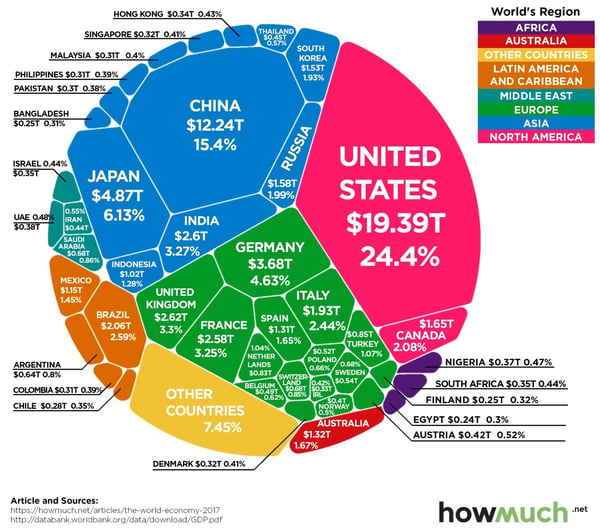 The coming week sees a bare economic calendar in Canada with a similar paucity in America. However, two major event risks loom stateside: the midterm elections slated for Tuesday and the Fed rate announcement on Thursday.