Last Friday, Federal Reserve Chairman Jerome Powell issued a rare unscheduled statement while the markets were still open. The statement was delivered to reassure investors and to open the door to a possible interest rate cut at the Fed’s March 17-18 meeting. On the following Monday, Bank of Japan Governor Haruhiko Kuroda said the central bank will take necessary steps to stabilise markets jolted by the COVID-19 virus outbreak. ECB President Christine Lagarde followed suit late in the day with a comparable statement, boosting speculation of coordinated global policy action. Early Tuesday morning, this came to fruition with a conference call by G7 central bankers and finance ministers to discuss the widening crisis. They issued a joint statement at 7:00 am EST pledging to “use all appropriate policy tools” to support the global economy during the spread of the virus.

Judging by the response of stock futures shortly after the joint statement, it was clear that the market needed more than words as reassurance. A couple of hours later, before North American markets opened, the Fed cut its benchmark interest rate by a half-point, the first one outside of scheduled meetings since the crisis year of 2008. This move lowered the Fed’s target for benchmark interest rates to between 1.0% and 1.25%, down from 1.50-1.75%. Thus, a reduction of 125-basis points is all it would take to move the Fed target rate to zero. 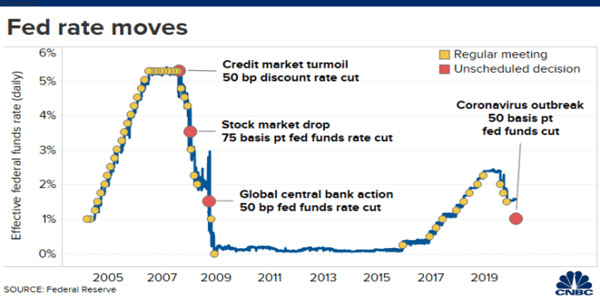 As you can see from the graphic above, emergency unscheduled interest rate cuts by the Fed begets more rate cuts. Hence, Mr. Market is already pricing in another 50-basis point cut at the Fed’s scheduled March 17-18 meeting. This is sparking fears that the Fed will institute negative interest rates like other central banks, such as Japan and the Eurozone.  Since the USD is the reserve currency of the world, we think that it will use other tools in its toolbox, such as QE, instead of taking rates into negative territory.

Nevertheless, the Fed’s action hasn’t stemmed the losses in equity markets. Why is that?  Markets are fearing economic disruption due consumer retrenchment. Fear of catching the virus discourages people from going out and spending money. As the saying goes “money makes the world go around”, so decrease in money velocity usually leads to recessions. This will trickle down to corporate earnings, so the stock market will sell down to reflect this fact.

In Japan, for instance, household spending fell 3.9% in January as an earlier sales tax hike and the fallout of the coronavirus has kept wallets shut. In China, car sales crashed by 80% in February, the sharpest monthly decline in nearly two decades as the virus kept consumers away from dealershi. 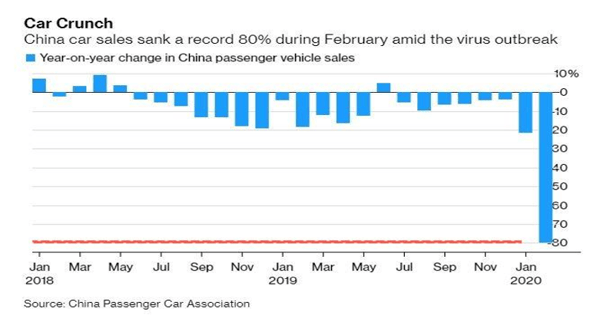 The rush out of stocks and into the safety of bonds has caused the UST 10-year yield to fall to record lows, falling as low as 66 basis points on Friday. With yields this low, the USD is losing its yield advantage - hence its terrible relative performance this week. The US dollar index has gone down every day for the last two weeks. 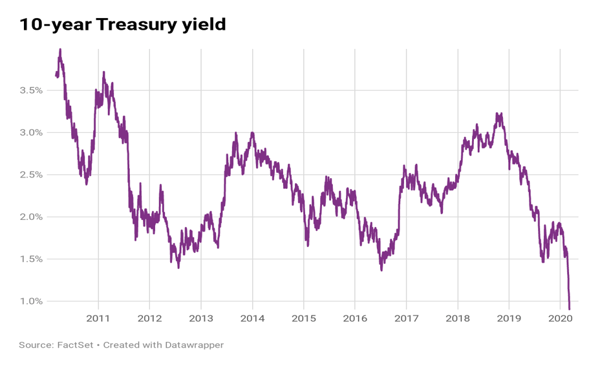 The only currency performing worse than the USD was the CAD. Like the Fed, the Bank of Canada also cut its interest rates by 50-basis points to 1.25%. This was the central bank’s first cut in four years. The bank meets again in the middle of April and Mr. Market has already discounted a quarter point cut. Interestingly, BOC President Stephen Poloz hinted the day after the cut that, virus or no virus, it may have been inevitable. Poloz may be postulating that the global economic impact of the outbreak is going to curtail demand for Canada’s number one export: oil.

We don’t want to stoke fear, but historical data on this is not terribly comforting. As you can see from the chart above, when the price of oil fell to the $30 level in 2016, the CAD fell to the sub-70 cent level. Keep in mind that price of oil should be up, not down this year, especially with a backdrop of the killing of Qasem Soleimani by the US, Iran’s retaliation attack on US troops in Iraq, and the shutdown of almost the entire Libyan production. At the time of writing, the price of oil crashed by more than 9%, to its lowest level in nearly three years, as major producing nations and OPEC failed to agree on supply cuts aimed at addressing the collapse in global demand caused by the virus outbreak.

Right now, economic data goes out the window as market players are monitoring the viral case count to see when the outbreak will peak (and no one knows when that will be). Until then, wash your hands frequently and keep a safe distance from others.