As this very strange year draws to a close, it is becoming increasingly apparent that optimism is warranted for 2021 and beyond; perhaps not in H1, but H2 certainly. There has been a steady stream of positive news in recent weeks, and a repeat of the “Roaring Twenties” may be in the offing.

We base this assessment on several things. Firstly, it’s now three weeks in a row of upbeat Covid-19 vaccine developments. While the most recent announcement from AstraZeneca was overshadowed by reports of clinical trial errors, still the fact is that very bright people are working 24/7 at very large pharmaceutical companies and making enormous progress, with more likely to come. The arguments over the logistics of delivering the vaccine on a mass basis miss the point that, within less than a year, this virus has gone from a mystery to something reasonably well understood and now, apparently, preventable. All else is details, major details, but details nonetheless.

Furthermore, the Dow Jones average finally cracked the 30,000 barrier, closing on Tuesday at a record high of 30,045.84 and beating the previous high of 29,551.42 set just two weeks ago. (We can recall when the Dow was in three digits, not five, and interest rates were in double digits. But we digress.)

Many market observers question this prolonged rally in equities, pointing out that the global economy is still in severe recession due to the pandemic, and whole sectors of the economy, such as airlines and hotels, are in desperate shape. But it is not generally the function of equity markets to reflect the current economy.

Equities, by their nature, look to the future of corporate earnings and the economy and discount possible outcomes. Traders generally look out six to nine months and it appears they like what they see: a pandemic largely vanquished; restrictions on corporations and individuals, especially small businesses, removed or drastically lightened; a vast amount of consumer spending representing pent-up demand not wholly satisfied by online shopping; and governments and central banks supporting the recovery with further stimulus spending and continuing low interest rates.

Finally, President-elect Joe Biden’s announcement that he intends to nominate former Fed chair Janet Yellen to the position of Secretary of the Treasury was met with a positive response by market players. Ms. Yellen is viewed as dovish and willing to move forward on the stimulus package greatly desired by traders and investors.

BOTTOM LINE: Mr. Market sold off the greenback in an emphatic display of RISK ON, leaving the USD to trail all other currencies save the hapless JPY.

So perhaps there is light at the end of the tunnel after all, and not an oncoming freight train!

For the third week in a row, NZD ended up the winner after traders learnt that the NZ finance minister, in a letter sent to the Reserve Bank of New Zealand, expressed concern over the effect of low interest rates on the country’s housing market. Like most developed economies during this pandemic, low mortgage rates engendered by ultra-low administered rates are stoking a housing boom and rising prices. The minister suggested that the RBNZ add house prices to its monetary policy “remit” (area of responsibility). Such a proposal would likely forestall any further rate cuts by the Bank or additional quantitative easing which would clearly be a positive for kiwi, which rallied sharply in response. 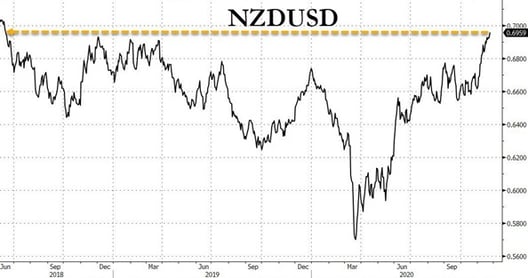 There were no economic metrics released in Canada last week, although Bank of Canada Governor Tiff Macklem, speaking last Thursday, reiterated the Bank’s determination to keep rates low for quite some time yet:

"We want to be very clear - Canadians can be confident that borrowing costs are going to remain very low for a long time."

Mr. Macklem also expressed confidence that a vaccine, if available sooner rather than later. Events seem to be moving in that direction, with Prime Minister Justin Trudeau saying a majority of Canadians could be vaccinated by September of next year – in which case the domestic economy could rebound more quickly than the Bank had anticipated. CAD moved marginally stronger on the news.

In America, there was a whole slew of interesting statistics released before 12 noon last Wednesday, as the country prepared to shut down for the annual Thanksgiving break. We’ll take a look at a couple of the more noteworthy ones.

Metrics of manufacturing and services showed strong gains. The November Markit Mfg. PMI was forecast to decline to 53.0 from the prior 53.4 yet emerged at 56.7 - a solid beat. Services PMI likewise was predicted to fall to 55.0 from the previous 56.9 but emerged at 57.7 – another solid beat. 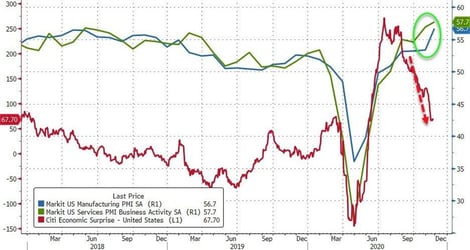 We mentioned the strong housing market in New Zealand and developed economies generally, and the US is certainly no exception. New Home Sales for October were expected to come in around +980K with the actual result around +1.0KK. However, the three prior months were all revised upwards – always a good sign:

Let’s re-visit the whole “light at the end of the tunnel” metaphor briefly. One thing we’ve noticed over many years is that difficult times, such as nowadays, tend to bring out the gloomdoomers and naysayers in force. The media, always looking for a good scare to draw eyeballs and clicks, tends to give such individuals an unwarranted amount of attention. This is hardly surprising in an industry where “if it bleeds, it leads”, but is it wise to pay much heed to it? 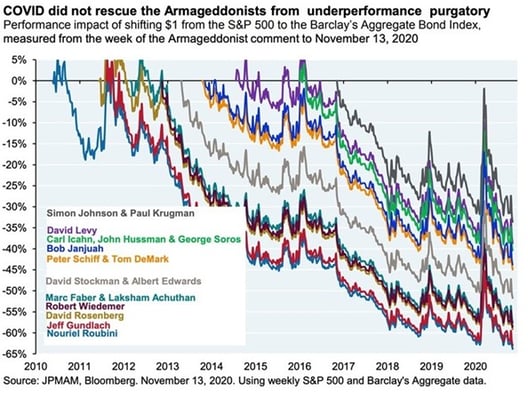 The chart above shows a list of prominent naysayers (sadly including Jeff Gundlach, the reigning “bond king” and one of our favourites) and a host of other familiar names. At some point in the past, these gloomdoomers have advised players to get out because “we’re all going to die this time” or something similar. Yet, if market players had taken their own advice at those times, selling risky equities for the safety of bonds, these same investors would have taken enormous losses over subsequent years. In fact, the one recent occasion where naysayers had it right was the spike in March 2020, and that ultimately proved ephemeral.

The moral: It isn’t different this time. And it never is.

The coming week has plenty of event risk on tap. In Canada, Monday sees the federal government’s fall fiscal update as well as labour market metrics on Friday. Additionally, Canada’s major chartered banks will be releasing their most recent quarterly earnings, results sure to be closely examined by Mr. Market. In the US, labour market statistics will also be released on Friday, along with some other second-tier metrics and a dash of Fedspeak.