When the Japanese yen and Swiss franc are the top performing currencies on the week then you know that risk aversion was the reason. The markets have been moody most of the month as the investment landscape adjusts to the new macro world of less fiscal and monetary stimulus. We will get our first glimpse of this post covid stimulus world on Wednesday as two central banks in the Americas, the Federal Reserve and the Bank of Canada, have pivotal policy announcements.

It has been clear that the Fed’s accelerated taper announcement in December was meant to preserve the flexibility for 4 (or more) rate hikes in 2022. That tells me that the Fed will use this upcoming meeting to lay the groundwork for a March rate hike. Prior to the start of the year, the market was only pricing in 3 rate hikes in 2022. Fast forward to today, with inflation having reached the 7% mark, the highest level in nearly 40 years, the market in now pricing in 4 rate hikes for this year with a small chance of a 50 bps move in March. Now you can see why the markets have been moody this month – they have been adjusting their positions to the new macro environment.

The market will also be on guard for any Fed talk about its balance sheet strategy. The start time, the amount, and the pace of the balance sheet runoff will be of interest. Also, prior talk by some members about unwinding the balance sheet to complement or even supplant rate hikes would have implications on the yield curve.

The potential for a surprise may come from the Bank of Canada. The previous governor Stephen Poloz surprised markets twice during his tenure. Poloz cut rates in January 2015 due to the stunning speed and magnitude of the oil-price shock. He hiked rates in September 2019 breaking an unwritten rule by adjusting rates without a scheduled post meeting press conference. 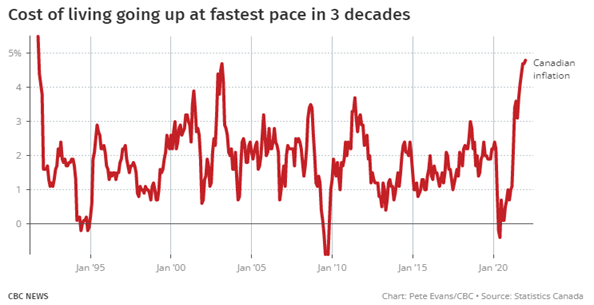 Although, this time around, I’m not sure how much of a surprise it would be. Remember, the BOC abruptly ended its bond buying program last October. Also, a couple of banks are forecasting a January hike. At the end of last year, the overnight swaps market was pricing in a 55% chance of a January rate hike, today it is slightly over 70%. The swaps market is also pricing in a total of 160 bps of tightening this year. Also, with inflation almost hitting 5%, a rate cut this month would not be that shocking.

Based on the amount of interest rate hikes expected between the two countries, the Bank of Canada is going to be more aggressive. This should lead to a stronger CAD relative to the USD. The USD will have bouts of strength, but these bouts will be attributed to temporary risk of swings, such as we observed last week.

As for the USD relative to the rest of the major currencies, the best avenue for that is through the US dollar index which is made up of trading partners. This index flashed a warning sign last week when it became overbought on the weekly chart (green boxes in the chart below), and then rolled over into negative momentum (purple boxes in the chart below). This has often lead to a significant decline in the dollar index after that point. 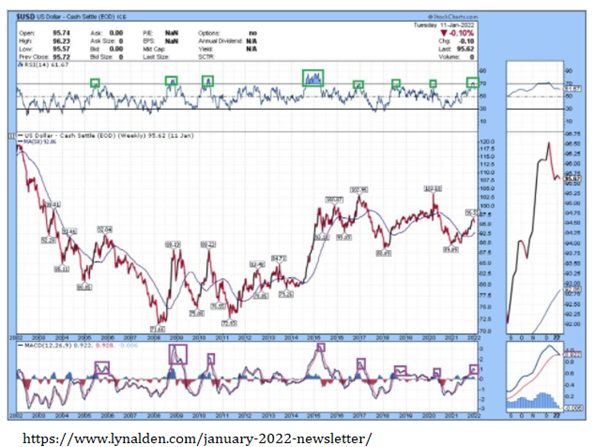 The two monetary policy announcements are the key events this week, but there are two political events, one geopolitical event and some important data releases as well.

The preliminary January PMIs will be released this week and will show what we already know – growth weakened. The onset of the Omicron variant and the renewed restrictions has put a damper on growth We have already seen this in the retail sales data and other Fed surveys. The first look at US Q4 GDP and Core PCE will also reflect the slower growth which can be seen in the Atlanta Fed's GDP Now tracker, which has fallen to 5.1% from 7.3% late last year.

As for the political issues, Boris Johnson could be on his way out. An investigation into his government’s parties (Partygate) while the rest of the nation was on lockdown is due to be released. Meanwhile, in Italy, the presidential selection process begins. Some political horse trading will need to happen in order for Italy to not rock the Eurozone boat.

The lone geopolitical issue remains the Russia-Ukraine story as Russia builds up forces along the Ukraine border. Russia wants NATO to close its membership and not accept new members especially ex-USSR countries. Russia would feel threatened if missile were placed in the Ukraine just like the way the US felt during the Cuban missile crisis 60 years ago. 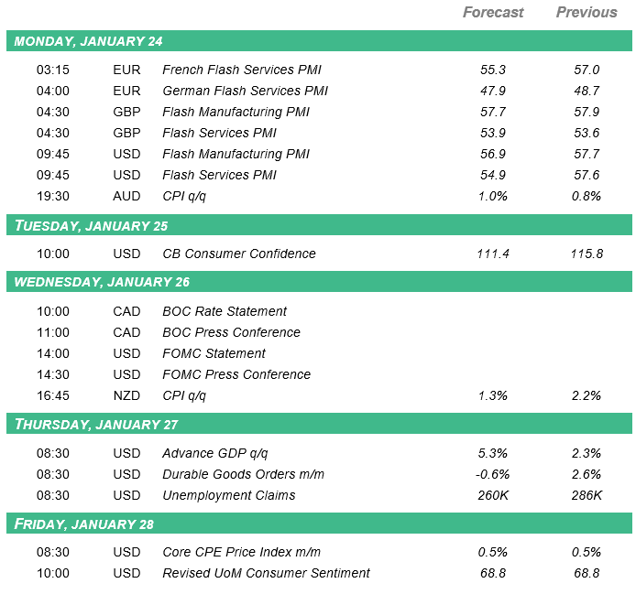