It has taken a little over thirty years, since the collapse of the Japanese asset bubble in 1989, for the economic policies of Japan to be adopted by virtually all advanced economies. It didn’t happen overnight, and not without some pushback either, but with recent developments in North America it has become clear that ‘japanification’ is here to stay. How did this happen? It would be instructive, before analysing recent market events, to review briefly Japanese economic history in recent decades.

The Japanese economy grew strongly in the post-war era and ended, quite abruptly, at the beginning of the 1990s. In the 1970s and 1980s Japanese products were everywhere: automobiles, stereo equipment, televisions, VCRs, and a whole host of other electronic gadgets. Trading companies like Mitsubishi, Toshiba, and others grew to enormous size, supported by both a cooperative national government and banking system. This pattern of growth continued unabated until the mid-80s, when the advent of the Plaza Accord in 1985 altered the exchange rate of the Japanese yen versus the US dollar. At the time, the greenback was exceptionally strong against the JPY, Deutsche mark, French franc, and GBP, leading to a vast increase in America’s trade gap. Sound familiar?

Devaluing the USD through market intervention and raising the exchange value of these other four currencies was considered a near-term solution.  This fueled a speculative price bubble thanks to so-called “window guidance” from the Bank of Japan in order to offset the stronger yen, encouraging domestic banks to lend more and with less regard to borrower quality. The result was a huge speculative bubble in which Japanese equities (the “Nikkei Dow”) hit levels not seen since that time. Real estate joined in the mania as well – we recall anecdotes of large residential properties in central Tokyo being valued greater than the sum of all real estate in the entire state of California. Such was the foolishness engendered by too much easy money.  The BOJ responded by raising rates in 1989 and restricting credit leading to the collapse of the bubble. With the sharp decline in asset prices, many highly leveraged companies found themselves unable to service their debts, leaving banks and insurance companies in a severe pinch. Here is where the major policy error, we believe, was made. These financial institutions, rather than suffering the consequences of their actions, were bailed out with capital infusions from the Japanese government and permitted to postpone the recognition of their loan losses. This was the origin of the term “zombie banks”.  (Much the same thing was done post-Panic of 2008, with American and European banks carrying vast amounts of non-performing debt)

The net result was economic stagnation. Consumers reined in spending while stalwart companies such as Toyota, Honda, and Panasonic faced sharp competition from upstart companies in the Far East, such as those located in South Korea and Taiwan. In response, many Japanese companies turned to temporary workers – low pay, few job benefits – and this cohort by 2009 amounted to fully one-third of workers. With a low-paid, insecure labour force and an aging population, demand in the economy has essentially evaporated. The result was deflation as manufacturers keep marking down prices to attract buyers and consumers play a waiting game anticipating price declines.

It is arguable that a similar situation arose in the Panic of 2008, when over-extended lenders and borrowers in the US real estate market nearly brought down the global banking system. Or so it is claimed. Regardless, similar policies were followed in the aftermath of the Panic as in Japan: interest rates dropped to low levels, banks and insurance companies – rather than facing the consequences of their actions – were bailed out by the taxpayer, and the Federal Reserve along with other central banks embarked on a programme of quantitative easing, buying treasury bonds all along the yield curve to drive down rates.

That is, essentially, where we are today. 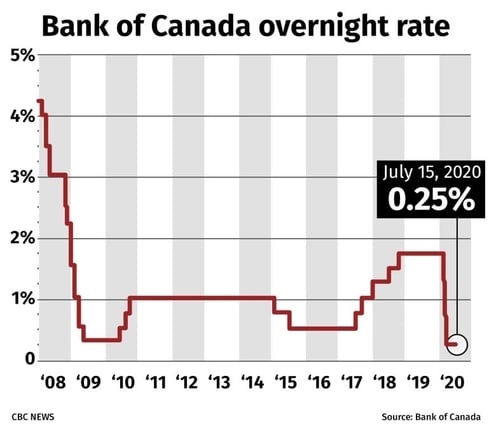 As was widely expected, the Bank left overnight rates unchanged but, in a nod to the BOJ, Governor MacKlem was emphatic that rates will stay low for a quite extended period. In remarks many interpreted as encouragement to the domestic housing industry, Governor MacKlem said those considering a mortgage could be assured that rates would stay low for some time.   Additionally, the Bank committed to QE purchases of at least 5.0 bil per week of Canada bonds. However, what the Bank did not do was hint at any move to negative interest rates or yield-curve control. In that, the Bank is aligned with the Federal Reserve, who have also dismissed any adoption of negative interest rates. Given that negative rates and yield-targeting are commonplace elsewhere after being pioneered in Japan, one could argue that Japanification of the North American economy is not yet complete. On the fiscal side, Canada’s national government has certainly done its part, running vast deficits during 2020 in dealing with the Covid-19 pandemic. 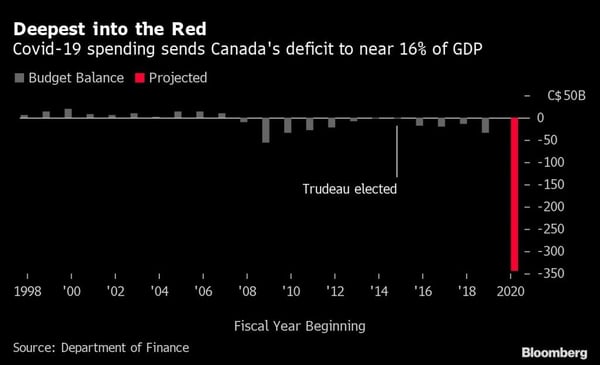 So, in Canada, to sum up: vast government deficits, low inflation (+0.7% yr/yr last), and ultra-low interest rates for the foreseeable future. We would say there is near-total japanification here.

In the Land of the Free, despite a higher read on core CPI than expected (+1.2% yoy vs call +1.1%), the Fed’s focus is still on the domestic economy.  Inflation is on the back burner for now. The Fed has made clear that negative rates are not under consideration but, with its vast purchases of treasury bonds and corporate paper to underpin a stagnant economy, the Fed is following policies initiated long ago by the Bank of Japan. On the fiscal side, Washington is certainly doing its part, too. Additionally, Fed board member Lael Brainerd, in a speech last Tuesday, advocated that the Fed “pivot” to a “longer-term accommodation”. Low rates for an extended period of time, low inflation, sluggish growth, and vast federal deficits - as in Canada, japanification of the American economy isn’t yet complete, but it is awfully close.

The coming week sees a mix of secondary economic statistics on both sides of the border, with no Fedspeak on tap.