For the second consecutive week, the New Zealand dollar is the top performing currency. Last week, the kiwi caught a bid after the Reserve Bank of New Zealand left rates unchanged, left their bond buying program unchanged, and introduced a new loan facility. They also delayed the imposition of new capital buffer rules for a second time and upgraded their economic outlook. Additionally, Central Bank Governor Orr signaled they were not considering negative interest rates, which had been priced in for next year.

Building on last week’s RBNZ’s policy modifications, news that there was only a small cluster of coronavirus cases in the country (in Auckland) has helped propel the NZD to 2-year highs.

On the other side of the coin, the USD swung to the back of the pack. The lack of additional fiscal stimulus, weakening domestic data, and surging Covid cases is starting to weigh on the USD. Recently, Goldman's chief FX strategist Zach Pandal said that the "depreciation in the broad dollar can continue in 2021". He expects a 6% decline in the broad trade-weighted dollar index over the next 12 months, and a "sustained but orderly" 15% real depreciation from its 2020 peak to the end of 2024.

The graph below is from Citibank analyst, Tom Fitzpatrick, and shows that the current path of the USD-index remains very similar to that seen during the last bull and bear cycle. 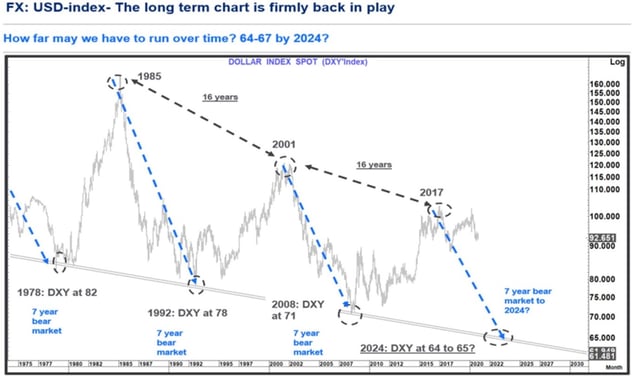 The index is firmly below all the important support levels including the 55-month moving average (96.03) with good horizontal support at 88.25 (2018 low). A monthly close below 92.47 would mark an outside bearish reversal and would open the way for extended medium term losses.

Could the USD go on an extended downtrend? Sure, it could, but you must remember that there is another side to the equation. If the USD goes down, other currencies must move up.

Over the last couple of weeks there have been calls from some Asian policymakers that their respective currencies are too high. Thailand central bank announced easier rules for investing in foreign currencies and securities in its latest move to try and halt the baht's rise. Similarly, South Korean Vice Finance Minister said he would take steps to stabilise the currency market in the face of a persistently rising Korean won, after it hit its highest in 2 years.

As you can see from the graph below, the Bloomberg JPMorgan Asia Dollar Index has risen to its highest level since June 2018.

So, the USD may not necessarily go down because other foreign bodies don’t want their respective currency to go higher. Thus, we may be stuck in a race to the bottom of the barrel with a beggar thy neighbor policy response spiral.

Don’t look now, but it’s back. What’s back? Vaccines. Monday’s announcement that Moderna’s new vaccine appears to be 95% effective in Phase 3 clinical trials was great news on top of Pfizer’s announcement the week prior, but that’s not what I’m referring to. The virus? Well, it never went away. President Trump? No, not him either - he’s kind of running out of time with his post-election lawsuits being dismissed left and right. No, I’m talking about Bitcoin.

What’s different this time around? In a word: adoption. Institutional investors, like Paul Tudor Jones and Stan Druckenmiller, have begun taking sizable positions. Chartered US banks have been given permission to custody Bitcoin on their clients’ behalf. Public companies such as MicroStrategy and Square have invested $425M and $50M, respectively, into Bitcoin as a treasury allocation. Lastly, the announcement that seems to have kicked off this recent rally is that PayPal has entered the cryptocurrency market, announcing that its customers will be able to buy and sell Bitcoin and other virtual currencies using their PayPal accounts.

The other driver is that investors are using Bitcoin as an inflationary hedge to combat the prospect of continued government stimulus and the monetary debasement of their domestic currency. Last week, Deutsche Bank's Jim Reid said that there also seems to be an increasing demand to use Bitcoin where gold used to be used to hedge USD risk, inflation, and other things. 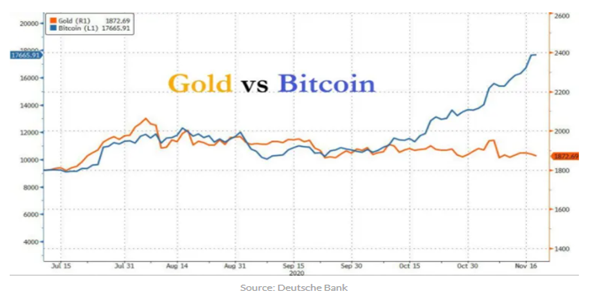 While Bitcoin’s year to date rise of nearly 160% is outperforming every other asset class, it is playing second fiddle to the other darling digital asset, Ethereum. ETH is up over 315% this year as it quickly builds the financial plumbing of the internet of money.