It's a New Year

It’s a new year and we wish you and your loved one’s health and prosperity in the year ahead.

As we begin 2023, the question on the collective mind of the forex market is - has the USD topped. As you can see from the first chart above, the USD was the best performing major currency last year. However, when you look at the second chart, the relative performance in Q4, you see that the tables of turned, the USD was the worst performer. In fact, in the last 3 months of the year, every major currency, except the CAD, rose by more than 6% against the USD. Thus, barring a financial crisis like we had in 2008, I believe the USD has put in a top.

I’m going to outline the 5 reasons that have persuaded me that the USD bull market has peaked: Truss and the GBP, a hawkish European Central Bank, global central bank pivot, the Bank of Japan’s December surprise, and China’s pivot form strict COVID polices.

UK Prime Minister Liz Truss resigned after failed budget and market turmoil on October 20th after being in power for only 44 days. The sell off and rebound in the GBP during that span was remarkable and the subsequent rally in the GBP in the aftermath of her reign was the first clue that the USD has topped because it wasn’t able to capitalize on the UK’s misfortune.

In late October, the European Central Bank raised rates by 75 bps for second straight meeting, the fastest interest rate hikes since the euro first launched. This was a decisively hawkish move because it underscored the bank’s determination to control inflation despite the threat of recession. ECB President Christine Lagarde went out of her way to emphasise this by acknowledged the risk was growing that the eurozone could plunge into recession but said “inflation remains far too high” and will stay high for an extended period, so the bank expects to keep hiking. “We are not done yet. There is more ground to cover,” she told reporters. Adding fuel to the euro’s upside is the fact that the ECB started its rate hikes 6 months after the Fed’s first hike, thus its tightening cycle is expected to continue after the Fed’s cycle has ended. As you can see in the weekly chart above, the euro has broken out of its downward channel and has posted its 11th straight weekly gain, the longest uninterrupted gain since 2004.

In October, the Bank of Canada surprised the markets with a smaller-than-expected 50 bps rate hike, instead of the 75 bps that was universally expected. The BOC’s move comes on the heels of the October 4th move by the Reserve Bank of Australia to hike rates by 25 bps versus the 50 bps hike that was expected. These two surprises by the BOC and RBA were a clear signal that major central banks (except ECB and BOJ) were about to pivot from the front-loading of policy rate tightening with big rate hikes to a more calibrated approach with small hikes which would be more data dependent. The Fed’s December rate hikes and its Summary of Economic Projections confirmed this pivot. In essence, the pivot means that we are closer to the end of rate hikes as inflation has peaked and the terminal rate is near.

The biggest central bank surprise was delivered on December 20th when the Bank of Japan announced that it would loosen its yield curve control that capped long-term interest rates on 10-year Japanese government bonds from 0.25% to 0.50%. Yields quickly jumped and approached the new cap while the yen jumped by more than 4% on that day. BOJ Governor Kuroda insisted this wasn’t a major change in policy, but given that he’s leaving in April, it raises the odds of more policy adjustments next year when the BOJ will have new leadership ushering in a broadly tighter monetary policy.

Lastly, after more than 3 years of strict lockdowns and travel restrictions trying to prevent Covid from spreading within its borders, China is in the process of shifting from zero-COVID to living with COVID. China has also rolled out a slew of measures to aid property developers and eased regulatory pressure on Chinese internet-platform companies. Also, American accounting regulators in December declared that China finally gave them full access to the audit papers of U.S.-listed Chinese companies, reducing the risk of mass delistings from American stock exchanges. Taken together, the changes all point to a brighter outlook for China’s economy and thereby, should boost the currency higher against the USD in the year ahead. 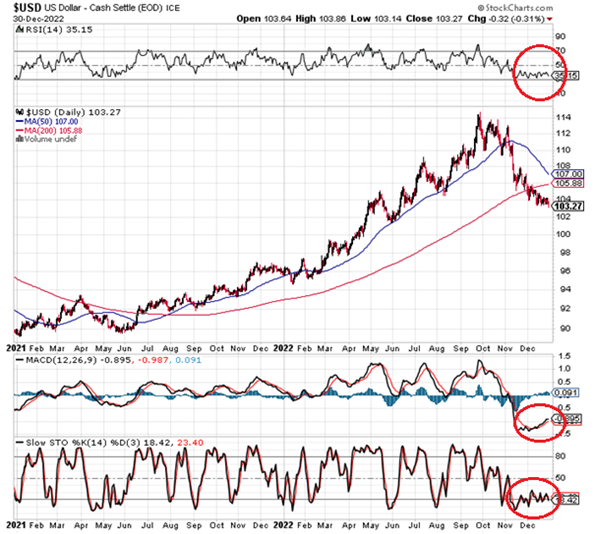 As you can see in the daily chart of the US dollar index above, the momentum indicators continue to show the dollar is oversold. Combine that with the large moves that the major currencies had against the USD in the last three months of the year, and you have the groundwork of a possible counter trend rally to work off the oversold conditions. This should present opportunities to adjust currency exposures for the balance of the year in the month of January. 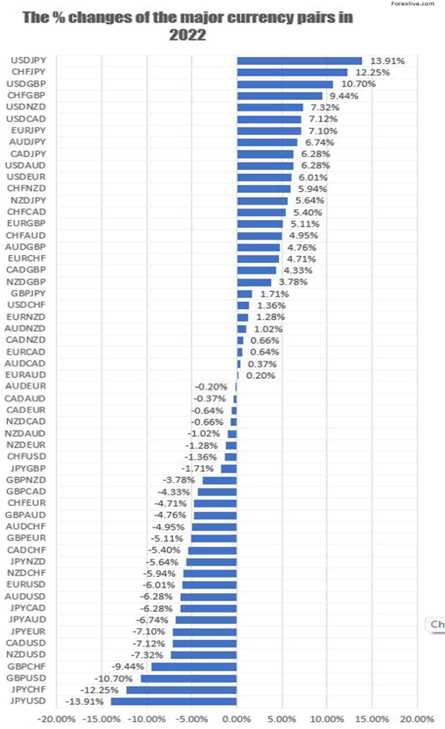