Here is a list, in no particular order of importance, of the top five events of this past week – Canada’s inflation rate cooled, most Fed speakers echoed cautionary guidance, oil prices near bear market, Mexico hikes by 25 bps, and Brexit negotiations have started.  After reading this list, your first impression may be that the currency markets were very volatile last week – wrong, directly the opposite.  In fact, a quick glance at the relative performance chart shows you that it was an extremely quiet week.  There were no extreme performers, the difference between the top and bottom was slightly above 1% with the USD stuck right in the middle of that range.  Could this be the start of the dreaded summer doldrums – only time will tell?

There was lots of Fed speak last week with no less than nine Fed policymakers making the rounds.  We won’t go into every minute detail of what was said by each one, but rather, summarise that a few of the Fed policymakers don’t seem convinced that the economy is performing well enough to warrant another round of tightening although many are leaning in that direction.  It sounds like they are an uncertain bunch.

Mr. Market isn’t convinced that the Fed will act either as you can see by the flattening of the Treasury yield curve since last week’s rate hike.  With no increase in yield the USD can’t get any traction, hence the listless price action in the USD. 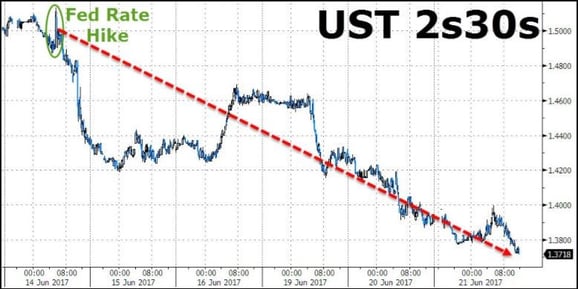 The US dollar index has been stuck in a tight trading range between 96.30 and 97.50 for the past five weeks.

We may be speculating here, but perhaps the Fed is slowly trying to signal to us that they may be getting away from relying on rate hikes and instead concentrate on reducing the size of their balance sheet, aka quantitative tightening (QT), to dampen monetary stimulus.  You see, if they continue to hike rates while the economy continues to soften and cause a recession, everyone will blame them.  However, the commoners don’t understand the unwinding of the Fed’s balance sheet, so if a recession is triggered by this reduction, the Fed will escape responsibility.  Cynical this may be, but I wouldn’t put it past them.

During the last five weeks while the US dollar index was treading water, the price of crude fell from $52 to $43 for a total loss of around 17%.  That’s a little shy of the 20% decline needed for the traditional classification of a bear market.  The good news for the oil companies, not the consumers, is that the price of oil looks poised to turn higher.  The technical momentum indicators on the daily chart are turning up which could see the price rally back up to the $45 level. 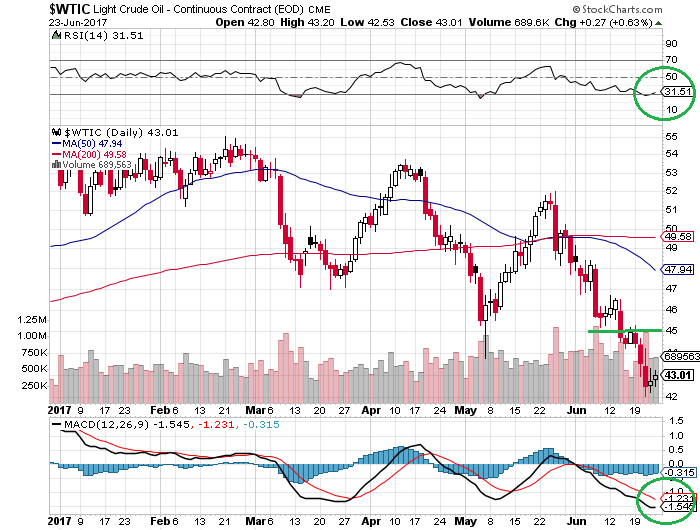 With the price of oil at $43, it is below the levels that the Bank of Canada last cut interest rates in January and July of 2015.  This is interesting since the BOC is now signaling that their next move will be a rate hike.  That being said, Friday’s domestic CPI reading for May eased to 1.3%, down from April’s 1.6%, and was the slowest since November 2016.  One would think that for the BOC to be ready to raise rates, inflation will need to pick up.  However, don’t tell Mr. Market that because he has been busy bidding up the CAD over the last five weeks.  Strap on your seat belts because this coming week sees Bank of Canada Governor Poloz and Deputy Governor Patterson speaking on Wednesday and Canadian GDP on Friday.  Traders beware as incertae (uncertainty) prevails.