In Gold We Trust

With the China-US trade war, global trade and recession fears, and global central bank easing, the market already had enough on its plate to worry about.  Last week saw the addition of two new fears to digest – the plunge in the Argentinian currency and the rapidly escalating Hong Kong Extradition standoff.  Argentine President Mauricio Macri’s heavy defeat in last Sunday’s primary election caused the peso to lose more than a third of its value in just three days.  It has since bounced back a little to finish the week down around 17%.  It just a matter of time now for the rating agencies to cut Argentina’s sovereign rating likely adding more pressure on the currency.

Meanwhile in Hong Kong, people are protesting an extradition bill proposed by the government of Hong Kong, which if enacted would allow local authorities to detain and extradite people who are wanted in territories with whom Hong Kong does not have extradition agreements with, including mainland China and Taiwan.  Some fear the bill would place the citizens of Hong Kong and its visitors under mainland Chinese jurisdiction, undermining the autonomy of the region.  However, the real fear here is that the Chinese government will send in the army to squash the protest.

Surprisingly, with the combination of fears outlined above, the GBP managed to outperform the major currencies last week with a gain of nearly 1%.  The weekly gain ended a 4-week drop against the USD and a 14-week slide against the euro.  With mounting fears of no-deal Brexit, the UK economy continues to chug along with solid employment, wages, and consumer spending.  July retail sales came in at 3.3%, better than the forecast of 2.6%.  Incidentally, the retail sales report has come in above expectations for every single month of 2019. 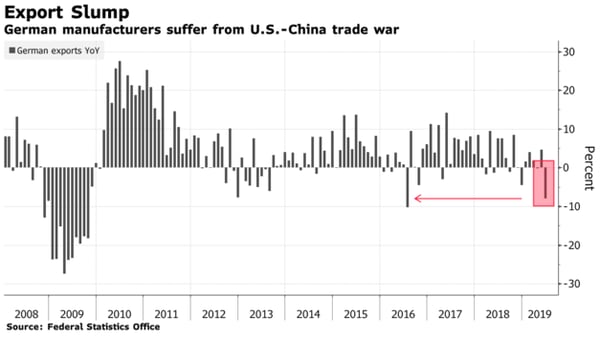 At the end of the spectrum, the Euro was the worst performer on the week, with a nearly 1% drop, on concerns over the health of the German economy and fears of Italian political turmoil.  Germany is the world’s 4th largest economy and it’s the 3rd largest exporter in the world so with German exports down 8% year over year in June it’s easy to see why the currency is struggling as global trade tensions escalate.  Also weighing on the euro were comments by Finnish central banker Olli Rehn, who said that the European Central Bank should come up with “impactful and significant” stimulus package at its next meeting in September.  In Italy, political uncertainty swirls as the coalition government ended on August 8th and the rest of Europe waits to see if another government can form without holding another election. 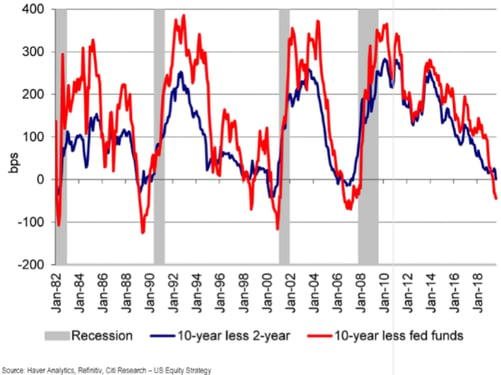 As if negative yielding bonds and falling global long bond yields wasn’t enough to deal with, now we have the inversion of the 2yr/10yr spread for the first time since 2007.  Last Wednesday, the yield curve briefly inverted with the yield on the 10-year Treasury note falling below the yield on the 2-year note.  Why is this important, because the Fed only controls short term interest rates and the market controls the long-term rates – thus, 2yr/10yr measures economic strength and the inversion is telling us something’s wrong.  A recession occurs, on average, 22 months following a 2-10 inversion and yield curve inversions accurately predicted each of the last 7 recessions.

All of these uncertainties around the globe have caused roughly $15 trillion in bonds and more than $1 trillion of corporate paper to yield a negative return.  Why would anyone buy a negative yielding bond - because you are more concerned about the return of your capital rather than your return on the capital.  There is an alternative – gold.  It has surged to record highs against 73 currencies and no, that is not a misprint.  Five of those 73 countries are in the top eight economies – the United Kingdom, Japan, Canada, Australia, and India.  It looks like some investors are seeking to insulate their portfolios against the combined threats of recession, plummeting yields, currency depreciation, and stock market instability. Gold is up 25% in GBP; 22% in the CNY; 21.5% in EUR; 19.7% in AUD; 18% in INR; 13% in CAD; and 12% in JPY.  Gold has not exceeded its all-time high in USD but it is up 16% year to date.  Not convinced – gold is too risky, central banks having bought 224.4 tonnes of gold in Q2, taking the figure for the first half to 374.1 tonnes — the largest net increase in global gold reserves in World Gold Council’s 19-year quarterly data series. 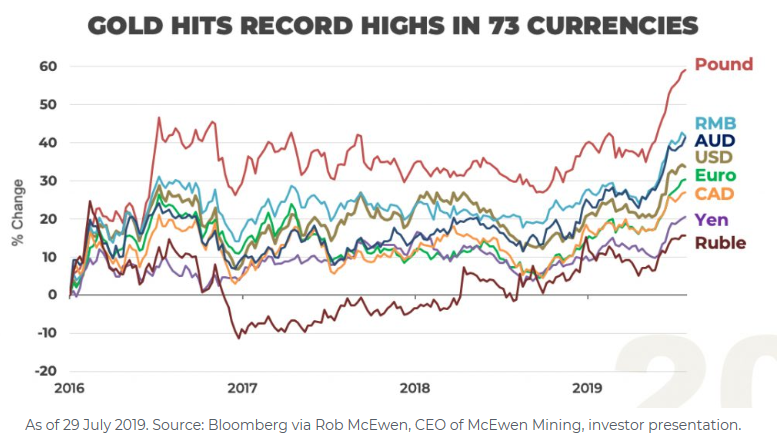 Speaking of central banks, on Thursday the Central Bank of Mexico cut overnight interest rates by 25 bps to 8.00% citing geopolitical risks and worries over a global slowdown.  That now leaves the Bank of Canada and the central bank of Norway as the only central banks that have not abandoned their neutral bias by cutting interest rates.  The BOC’s next meeting on September 4th will seek to find a balance between a solid domestic economy, a decent economy south of the border, and global trade and recession fears.  With July home sales hitting their strongest level since December 2017 the last thing that the BOC wants is for consumer debt ratios to move even higher or have the housing bubble reignite.  We think the BOC will try not to postpone the change of bias for as long as they can.  Right now, the markets have priced in a rate cut for December.  As for the currency, the CAD has been able to repel the USD’s recent assault of the 1.3350 level marking a double top in the daily chart; a move to the 1.3030 level is now in the cards.