Last week saw a classic herd response in the capital markets, with players selling everything in sight and seeking the safety of treasury bonds or other fixed-income instruments. Risk off would be a suitable description. This was indeed a massive move, sparked by growing (and, to a degree, irrational) fears of COVID-19, a.k.a. coronavirus. There were some economic statistics of note, although they have been rendered largely academic by the current pandemic scare. Let’s cut through the white noise and see what we can make of this.

In the US, New Home Sales in January soared well above analysts’ expectations at +764K SAAR vs the call of +711K. Even the previous month saw an upward revision from +694K to +708K. Tumbling bond yields (more below) may cause a further decline in mortgage rates, as US mortgage rates are set off both the 10-year and 30-year treasury bonds (less so on the latter). Q4 GDP came in as expected at +2.1%, although given the radically changed circumstances in Q1 2020, this and other measures such as January Durable Goods Orders at -0.2% (call -1.4%) and Chicago PMI at 49.0 (call 46.0) measure an economy already superseded by recent events.

In Canada, the only release was Q4 GDP, spot-on the market call of +0.3%.  The weakness in the Canadian economy at the end of 2019 has been well-documented and was acknowledged by the Bank of Canada at their last rate setting on January 22nd. On Wednesday the Bank will be making its scheduled rate announcement and players will be listening closely. Frankly, we doubt the Bank will move just yet, but April 15th is a possibility. Canada is being hit not only by the coronavirus fallout, but also by the First Nation railway blockades and the resulting mayhem. More still, there is the Teck Frontier debacle, the ongoing Coastal Gas Link issue, and a sharp decline in crude oil prices.

Globally, the outlook for rate cuts going forward is somewhat murky, but it’s a safe bet that central banks will be coordinating rate cuts should the coronavirus worsen. However, a valid question is how a quarter-point cut in the fed funds rate would help a factory in China to re-start. The answer is ‘not really’, but investors are badly spooked – see the VIX below comparing the debt ceiling issue in 2011 with the current coronavirus scare. For lack of any other means of reassuring nervous markets, the only option is to flood the system with liquidity. 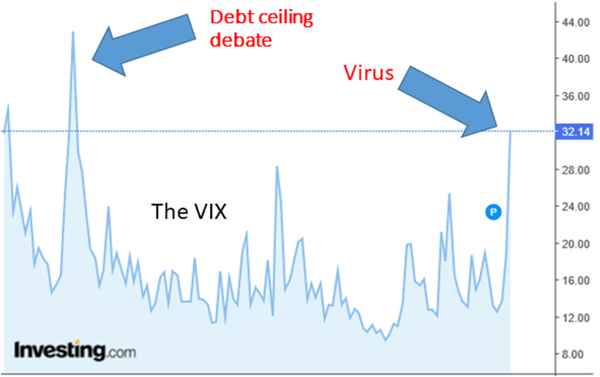 REFRESHER: For those unfamiliar with the US Dollar Index (USDX), which had been rallying in recent months (although giving up ground lately), it is a trade-weighted, geometric mean measure of the greenback’s strength against a basket of currencies.

The USDX was initially set up in 1967. The original European currencies were replaced with the EUR in 2000.

The essential point here is that three of the currencies in the USDX – EUR, JPY and CHF – are funding currencies. Meaning, in practical terms: all three currencies are afflicted with negative interest rates. Overseas investors can borrow in any of these three currencies at a (likely) negative rate of interest, sell the currency for USD, GBP, CAD, or another, and then re-invest the proceeds at a positive return (sometimes a substantial one). The central banks managing these funding currencies tend to take a benign view of such transactions; they generally lead to a weaker currency, which is considered good for export, etc. However, in a market panic, investors tend to bail out of their investments, receive cash, and then buy back the funding currency in order to pay off their loans. Thus EUR, JPY, and CHF were the winners on the week as players bailed out and paid off their loans. Given that these funding currency regions are mired in recession and/or sluggish growth, a stronger currency is the last thing wanted by their respective central banks.

This is another example – as if more were needed – that central bank meddling in the open market process of price discovery can lead to unexpected, undesired results.

To finish up with the COVID-19 report, here is an outline of the S&P 500 six-month and one-year % changes following recent well-broadcast ‘epidemics’:

Evidently, once the initial scare wore off, Mr. Market bought in a frenzy. Will this current scare turn out the same way? Only time will tell.

Lastly, the US 10-year and 30-year treasury bonds both hit record low yields last week as investors sought the safety of government debt. At the time of writing, 10-years traded at 1.15% yield (down from 1.50% at the start of February), while 30-years traded at 1.67% (down from 2.05%). Under ordinary circumstances (according to our friend the bond salesman) such a decline in yields would be a harbinger of recession, but he’s doubtful. Rather, fiscal and monetary stimulus already in place (or soon to be) to counter the coronavirus scare should provide sufficient impetus to move things forward later this year and into 2021. It is still an election year, don’t forget, and President Trump is determined to win re-election.

The coming week sees the aforementioned Bank of Canada rate announcement Wednesday, as well as the Canadian jobless numbers for February on Friday. Meanwhile, America will see a number of secondary metrics, the all-important jobless numbers on Friday, and a slew of Fedspeak.