The yen was the best performing currency on the week as a result of safe-haven flows as equity markets continued their downward trend. Despite gains on Friday, both the S&P 500 and the DJ Stoxx 600 ended their 6-week winning streaks. The NZD managed to eke out a small gain on the back of the 5th consecutive rise in the Global Dairy Trade price index. As you can see from the weekly performance chart, the USD had a very strong week with only a negligible loss to the yen and NZD. The gains were due to the change in interest rate expectations and economic data confirming the Fed’s less dovish bias.

Comments from major Fed speakers since their last rate cut have reset expectations that the Fed is done cutting rates for now. The CME’s FedWatch tool is showing a 93.4% chance of no change to interest rates in the Fed’s December meeting. Looking further out, traders are pricing in a 31.5% chance of interest rates remaining in the same 1.50-1.75% range at the end of 2020, with roughly 38% odds of at least one rate cut and 2% odds of a single rate hike by then. Thursday’s release of the Philly Fed index seams to supports the Fed’s view. It rebounded in the month of November to 10.4 this month from 5.6 in October, suggesting that the manufacturing sector may not be doing as terribly as the market may have feared. 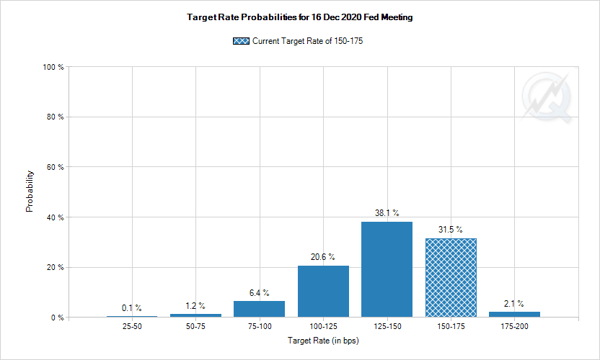 The US dollar index has continued to push higher and is up for three consecutive weeks. The weekly chart shows that it still has some room to run higher before hitting the downward sloping line of resistance at around the 99 level. The momentum indicators remain aligned with the price action, which confirms that there is more upside to be had.

Meanwhile, the anti-dollar, aka the euro, has reversed course this week and continued its November fall from a double top. This week will see the euro challenge this month’s low of 1.0990 and a run to last month’s low cannot be ruled out. The momentum indicators are showing that there is ample room for the currency to fall lower. Last week, Germany surprised with a meager 0.1% expansion in Q3. This helped Germany to officially avoid the simplistic definition of a recession of two consecutive quarters of negative growth, which may help stabilize the euro above the October low.

The GBP has declined from a triple top and head and shoulders formation. If the GBP falls through the neckline in the 1.28 level, then the path would be clear for the GBP to decline to the 1.2530 level. All of the momentum indicators we utilize are warning that there is more room for the GBP to fall. Thus, a fall to the 1.25 level would not surprise me, especially since a currency sell off usually accompanies election uncertainty. We recently saw this occur in the run up to the Canadian election which saw the CAD weaken and then find a bottom after the results.

The most interesting price action in the major currencies last week belonged to the CAD. The CAD took a swan dive on Tuesday and recovered some of its losses a couple of days later in a good-dovish-cop and bad-hawkish-cop scenario. On Tuesday, Bank of Canada Senior Deputy Governor Carolyn Wilkins delivered what appeared to be the groundwork for a potential rate cut. She said that although the economy is doing “relatively well overall”, she pointed to regional differences and reiterated concerns over the “immense challenges” (read: trade war) faced by the global economy. The remarks that made the CAD fall were that the BOC “still has room to manoeuvre” and that “lowering rates could provide some insurance against downside to inflation”. Furthermore, she added that the central bank has additional options in their tool kit such as “extraordinary forward guidance and large-scale asset purchases”. These are the words that trigger a slide in a currency.

On Thursday, BOC Governor Poloz made it very clear that he feels the central bank has monetary conditions “about right”, pouring cold water on building rate cut expectations. He also said he feels that global conditions have eased a lot. His comments were viewed as hawkish by Mr. Market.

Even though Poloz signaled that the bar to a rate cut is high the CAD looks like it has more room to fall. The momentum indicators are just starting to roll over. The USD may take out last month's high near CAD1.3340, which would then set up a move to the 1.3420 area. Notice the CAD has been confined to the apex of the symmetrical triangle, dating back to early 2016, between 1.3150 and 1.3400. Perhaps the ratification of the new trade deal between the US, Canada, and Mexico will be the catalyst to finally knock it out of this trading range. 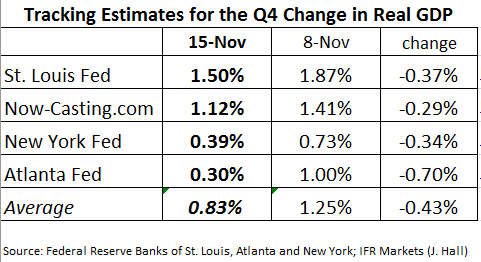 In the week ahead there is plenty of economic data but only three releases that will command Mr. Market’s attention. In the US, the October personal consumption expenditure will be watched to see if it can raise the Q4 GDP forecasts which have tumbled by over 0.4% in just the past week and currently sit at 0.83%. In the Eurozone, the report to watch will be the preliminary estimate for November CPI, which will set the stage for the ECB’s next meeting with its new President, Christine Lagarde, on December 12. For China, the November PMI for manufacturing and service will be gleaned for any small sign that would suggest that the world's second largest economy has turned the corner and stabilized.