Rising US inflation and the Fed’s response to try to contain it have been the main driver of the USD’s rise. However, that hasn’t been the only drive. In times of trouble, investors flock to the USD as a safe haven - the negative energy price shock in Europe and China’s economic weakness due to its zero covid policy have also contributed to the rise. Having said that, its hard to argue against an even stronger USD in the coming months, but for now a brief respite is in order.

On Wednesday of last week, near the end of the day, I posted a short note in our company’s chat site: “Feels like a short-term blowoff top in the USD today.” A fee factors gave me comfort in making that statement. First, I was very confident that the ECB would hike rates by 75 bps the following day (which they did). Second, the euro was able to close above parity for the first time in September. Third, the USDCAD rate was again repelled at the 1.32 level. Four, the GBPUSD had formed a bullish hammer candlestick on the day as it sniffed out an Energy Price Guarantee by the UK government capping household energy bills at £2,500 a year that was announced the next day. Five, all week Japanese officials from the Ministry of Finance and the Bank of Japan kept warning about unspecified action against excessive yen weakness.

Mr. Market is currently pricing in an 85% chance that the Fed delivers its third 75 bps rate hike that would bring the target rate to 3.00%-3.25%. However, a rather soft headline US inflation report on Wednesday could spur speculation that the Fed is closer to a pause in its hiking campaign. If that were to happen, then the brief respite in the USD rally would turn into an outright bearish turn. Personally, I don’t think we are there yet. 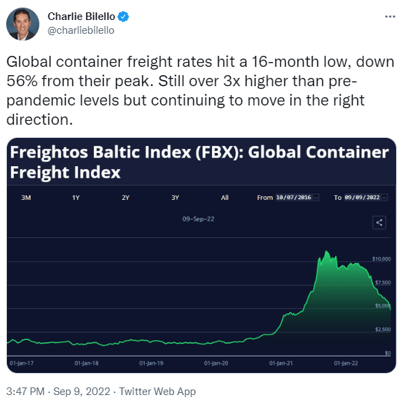 The Fed’s blackout period has started ahead of the next Fed meeting in a couple of weeks so no more comments from Fed speakers to drive the market. Thankfully, there is plenty of economic data in the week ahead including US CPI, US Retail Sales, and the customary Friday Chinese data dump. Also, with the passing of Queen Elizabeth last week, the Bank of England postponed its upcoming interest rate decision from Thursday to September 22nd. 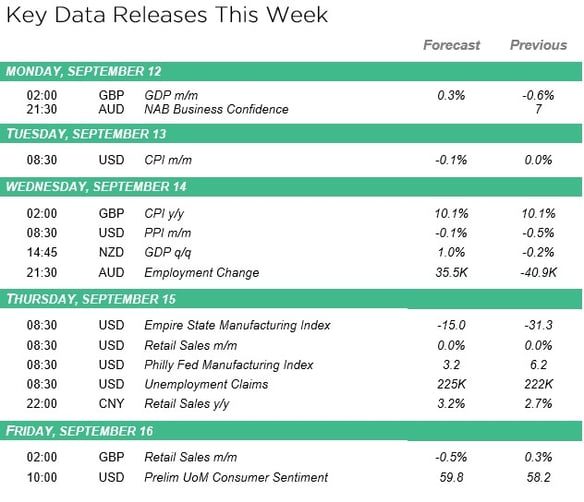