By a shady wady pool (Shangri-la, really la)…the immortal lyrics of Louis Armstrong and Bing Crosby largely described last week’s market action.  Let’s shake off the slumber and take a closer look at what happened which, aside from some surprising economic statistics, wasn’t much.  Gone fishin’…

The loonie ended one of the winners on the week, following a surprisingly strong July CPI release last Friday.  The mth/mth rate came in at +0.5%, well above the call of +0.1% while the yr/yr rate registered a rise of +3.0% versus the call of +2.5%, sitting at the top end of the Bank of Canada’s inflation target band of 1% - 3%.  The chief culprits were air transportation (+28.2% yr/yr) and gasoline (+25.4% yr/yr).  Our learned colleagues Dr. Long and Mr. Short were shocked (SHOCKED!) to learn that plane tickets and gasoline would be far more costly during the Canadian vacation season.  Regardless, Mr. Market liked the numbers and bought the beaverbuck aggressively, in anticipation of the next BOC rate setting on September 5th. 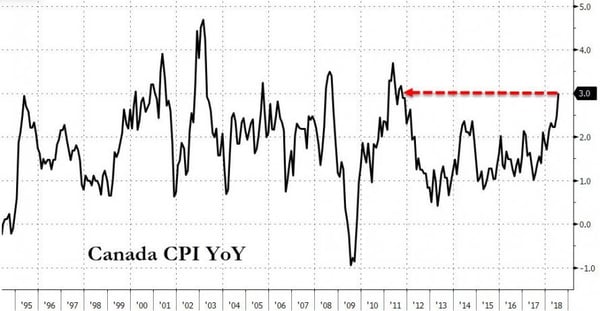 Additionally, tariffs recently put in place by the Trump administration are likely causing an increase in consumer prices, although to what extent isn’t clear as yet.

In the Land of the Free, about the only item of note was a sharp uptick in July Retail Sales, rising +0.5% vs the call of +0.1%, while ex-autos rose +0.6% vs the call of +0.4%.  The USD continued to hold on to its recent gains as a safe haven currency, although the Turkish crisis, so ably explained last week by my colleague (Turkey Burger August 13, 2018), now appears to be falling off the radar screen of most traders.  A loan of 15 bln USD to the Erdogan regime by Qatar has calmed things down for the time being.  Investors are now watching the Twitter antics of one Elon Musk – it really is the silly season!

Speaking of tariffs earlier brought to mind this whole so-called trade wars between Donald Trump and, it seems, just about everybody else.  What is the status of this war?  Real or phony? 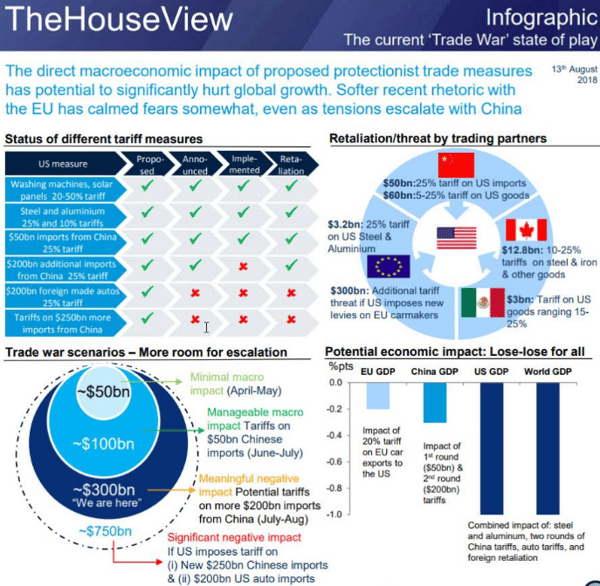 The above graphic is reminiscent of maps seen in an atlas of world history, and certainly clarify the current confusing situation.

About the only other item of note was the resumption of BREXIT talks in Brussels, with the odds of a conclusive deal now just 50:50.  Negotiations are covering the type of border between Republic of Ireland (EU) and Northern Ireland (non-EU), an issue which has proven unexpectedly difficult to resolve.

The coming week sees a light calendar of economic readings, with most US numbers due on Friday, coincidentally the same day the world’s central bankers mosey on up to Jackson Hole, Wyoming for the annual central bankers’ confab.