Last week was one for the books. Major economic metrics, central bank activity, a rollercoaster US presidential election – lots of things going on.

At the time of writing, challenger Joe Biden now appears to have defeated incumbent Donald Trump, collecting 290 electoral college votes. As it currently stands, it’s a rather slender victory with 270 votes being needed, but a victory nonetheless. So, with Mr. Biden heading to the Oval Office, several takeaways can be gleaned:

In other words, a Biden presidency with a divided Congress may walk the political fence between liberalism and conservatism domestically, while being internationally less fractious but perhaps not too acquiescent either. This is, so to speak, a “Goldilocks” political result: not too much yet not too little. Equity markets certainly seemed to think so, rallying strongly in the latter part of last week as Mr. Market embraced risk on, buying assets and trashing the USD (which ended up the clear loser on the week).

The central banks of Australia, Great Britain, and the US were also in the news last week. Let’s take a quick look at what our “betters” were up to:

The Reserve Bank of Australia, in an attempt to ease the country’s nasty COVID-induced recession, cut its overnight lending rate 15 basis points to 0.10%, while also announcing an increase in its bond-buying programme (QE) of 100.0 bln AUD. The RBA, echoing other central banks, pledged to leave the overnight rate unchanged until consumer inflation reaches a consistent 2.0 -3.0% level.

Such actions would, in normal times, see the AUD fall against other currencies, notably the greenback. But these are manifestly not normal times, and Aussie ended up the winner on the week. 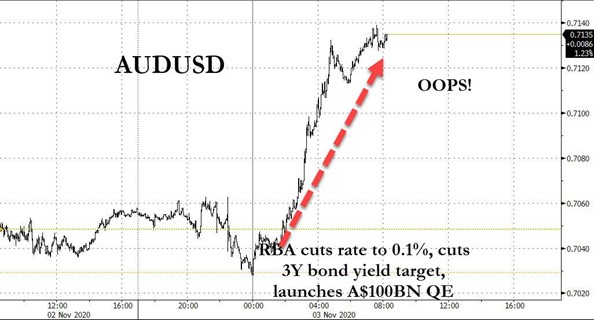 This tweet posted by the Bank of England neatly and clearly sums up the Bank’s actions last week. (Other central banks should consider doing the same). 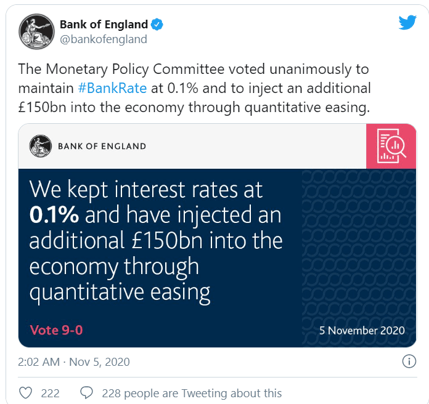 In its accompanying statement, the BOE downgraded its 2020 GDP call to -11.0% from -9.5%. The Bank also pointed out the uncertainty of the COVID situation and the ongoing BREXIT issue, while making clear that, should inflation decline, the Bank stands prepared to put in place “additional action”. There was no public mention of negative interest rates, although it is still looking into the idea.

Regardless, despite the downbeat news, Sterling still rallied. 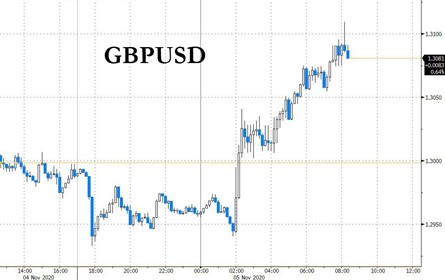 Last Thursday’s rate-fixing by the Federal Reserve was largely a non-event, noted only in passing by most players as equities staged a strong post-election “Goldilocks” rally mentioned earlier in this article.

Chairman Jay Powell reiterated his wish for fiscal policy to take up some slack in the economy, in other words a federal stimulus package. Markets had priced in major stimulus following an anticipated “blue wave” Democrat victory which failed to materialise, so any stimulus package is in the future. But we suspect that a deal of some sort will be arriving sooner rather than later, with the apparent victory by Democrat candidate Joe Biden.

Last week saw the release of the always-interesting labour market surveys in both Canada and America, and the results were rather good.

In Canada, October unemployment was forecast at +75.0K jobs and a rate of 9.0%. In the prior report the economy had generated almost +380.0K jobs, but analysts were a touch more subdued in their predictions. However, the result still beat the call, emerging at +83.6K jobs and the jobless rate beating the estimate, falling to 8.9% for the month. Of the jobs created, over 69.0K were full-time, further evidence of Canada’s recovery from the COVID lockdown, although job growth has been moderated by the “second wave” of the virus. 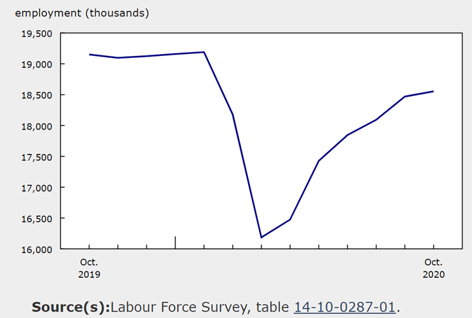 In the US, analysts had predicted October job growth of +580.0K and a rate of 7.6%, contrasting with the prior month’s +661.0K jobs and 7.9% rate. But the actual numbers emerged much stronger, with +638.0K jobs created and the rate tumbling to 6.9%. Buried in all the numbers was an increase in private-sector jobs of +908.0K, easily besting the call of +680.0K. Many government positions, chiefly temporary census workers, explains the difference.

Payrolls, however, slowly and continue to move in the right direction. And do we see a triple bottom in total nonfarm payrolls? That is certainly an interesting sign: 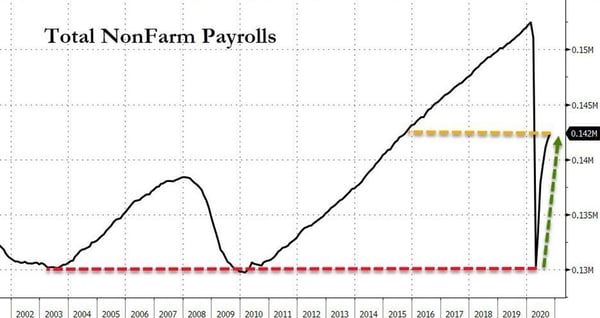 With the apparent resolution of the presidential election debacle, traders can once again focus on the economy. Additionally, an announcement by pharmaceutical giant Pfizer of a workable COVID vaccine is very positive news. Stats-wise the week is very light, with nothing in Canada on tap and only inflation metrics stateside, along with some Fedspeak. Treasury markets in both countries will be closed on Wednesday November 11th.