The nearly 3% up move in the GBP last week can best be described as a vote of confidence in the new government of the UK after a tumultuous 45 days in former Prime Minister Liz Truss. The former chancellor Rishi Sunak is the new PM, becoming the first British Asian person to hold the office, and being the first prime minister appointed by King Charles III. Truss also managed to set a couple of milestones – her tenue as the PM was the shortest in modern history and she presided during to monarchies.

Enough of UK politics, lets get back to the currency market. The other nugget that one can glean from the above chart of last week’s relative performance is that all the majors outperformed the USD. This is very interesting considering that this upcoming week is the US Federal Reserve’s rate setting meeting – could the USD performance be telling us something about the Fed’s next move? Let us unpack this thought now.

The Fed will meet on Wednesday and is widely expected to hike rates by 75 bps to bring the Fed Funds to 4%. As you can see from the last set of dot plots, no governor or regional president sees Fed funds above 5% next year. Furthermore, it also means that no Fed member will be arguing to hike aggressively next year. Thus, that puts the terminal rate at 4.75-5.00% and that leaves just 75 bps of hikes from the terminal rate. This is where it gets interesting – the futures market has about a 50% chance of another 75 bps hike in December, but this idea seems impaired as the idea of adjusting the pace has gained momentum thanks to the Bank of Canada’s rate decision last week. 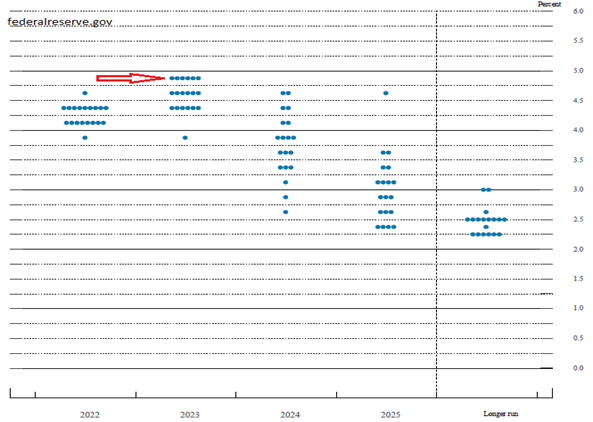 The Bank of Canada surprised the markets with a smaller-than-expected 50 bps rate hike, instead of the 75 bps that was universally expected, last Wednesday and said future increases would be influenced by its assessment of how tighter policy was working to slow demand and ease inflation. Bank of Canada Governor Tiff Macklem said the past hikes are beginning to weigh on growth and at the same time he said that there was no meaningful evidence that the underlying price pressures were easing. The BOC cut Q3 growth to 1.5% from 2.0% and projects the economy slowing to 0.5% in Q4. Next year's growth forecast was halved to 0.9%.

The BOC’s move comes on the heels of the October 4th move by the Reserve Bank of Australia to hike rates by 25 bps versus the 50 bps hike that was expected. RBA Governor Philip Lowe had hinted at the possibility previously and noted that global growth was slowing rapidly.

These two surprises by the BOC and RBA are telling us that the front-loading of policy rate tightening we have seen up to now is ending and the idea of calibrating future rate hikes toward incoming data is gaining momentum. Hence, the idea of global pivot by global central banks is before us.

The first comments come from Maurice Obstfeld, former chief economist at the International Monetary Fund - “Just as central banks misread the factors driving inflation in 2021, they may be underestimating the speed with which inflation could fall as their economies slow. By simultaneously all going in the same direction, they risk reinforcing each other’s policy impacts without taking that feedback loop into account. The highly globalised nature of today’s world economy amplifies the risk,” he said.

The second important comment came from Lael Brainard, the Fed’s vice-chairman, who said that synchronised tightening is "larger than the sum of its parts", and that it raised the risk of blowback into the US economy itself.

Lastly, San Francisco Federal Reserve President Mary Daly said on October 21st that the Fed should avoid putting the economy into an "unforced downturn" by raising interest rates too sharply, and it's time to start talking about slowing the pace of the hikes in borrowing costs. Her comments are especially interesting since she is considered to be Chairman Powell’s mouthpiece, remember she was the first one to float the taper last November.

So where does this leave the USD. Looking at the weekly chart of the USD Index, the momentum has been stopped. After a non-stop rally since mid-2021, the index has spent the last five weeks consolidating. This could simply be a rest before another leg higher, but it will depend on what the Fed signals on rates next week and how the US economy ultimately performs. According to the magazine cover theory, the USD may be topping out (see below).

In the week ahead, the Fed, RBA, and the Bank of England will hold their policy meetings, and all are expected to hike. However, the policy statements will need to be examined to see if these central banks will pivot. On the data front, China's PMI, eurozone preliminary October CPI and Q3 GDP, and the US and Canadian employment reports will be on the docket. Also, corporate earnings continue to be released throughout the week. 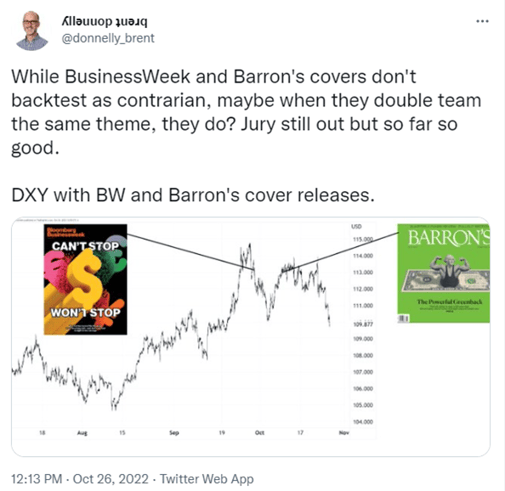 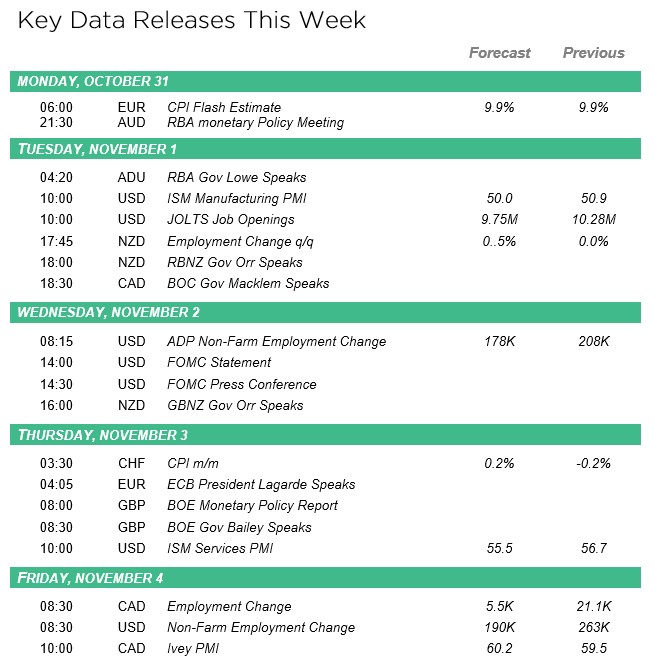