The New Zealand dollar was the worst performing currency last week as traders raced to short the kiwi after the government introduced a series of measures to cool its red-hot housing market. This included new taxes and promises to boost supply after housing affordability fell to its lowest ever. The government would speed up the pace and scale of home building with a new $NZ3.8 billion fund and announced more support for first-time home buyers. It also asked the central bank to support its policy settings with macroprudential policies to limit some types of lending. One such measure will prevent investors from offsetting interest on loans as an expense against their rental income.

Ironically, the billions of dollars in government stimulus and historically low interest rates are the main cause of the housing bubble, making it the least affordable among the 36 Organisation for Economic Co-operation and Development nations. Investors are now the biggest property buyers in the country of 5 million, with 40% of sales in Q4 2020 made to owners of multiple properties. Last year, 15,000 people bought homes who already owned five or more properties.

Meanwhile, the US dollar index continued to extend its gains from the beginning of the year, even as the yield on the 10-year Treasury pulled back last week. The driving force continues to be the growth divergence between the US and the rest of the world powered by the vaccine rollout and forever stimulus. The ink is barely dry on the recently approved $1.9T stimulus package and President Biden is already talking about the next major package. He’s proposing a $3T plan coming in two parts - the first focusing on physical infrastructure, like roads and bridges, and the second on human infrastructure, like education and childcare.

On the central bank side, the Fed’s easy money stance was reinforced last week by comments from a slew of Fed members:

The dollar index has finally managed to gain its 200-day moving average for the first time since last May. Some of the momentum indicators are a little stretched but at this point, are not signaling a turnaround. A move about the 94 level cannot be ruled out, especially if the dollar biggest competitor, Europe, continues to struggle with the virus and its vaccine rollout.

Since the euro is virtually a mirror image of the dollar index, you can see that it also just reached its 200-day moving average. The double bottom at the 1.16 level seems to be beckoning, especially since the Eurozone has no plans to offer up US style stimulus packages.

The CAD was the second-best performing currency last week on the back of the announcement by the Deputy Governor of the Bank of Canada that the central bank would begin unwinding its emergency liquidity measures. The short-term financing facility will end in May, while the commercial paper and the provincial and corporate bond programs will expire shortly and not be renewed. These moves clearly signal that the BOC will announce plans to taper its C$4B a week bond buying program as early as the next meeting on April 21. The CAD initially rallied on the news, but the USD's underlying strength proved too strong. Interestingly, the Norwegian krone and the CAD are the only two majors to gain against the USD this month as both are seen to be the first of the western countries to start the process of tapering monetary stimulus.

In the week ahead, data points will reinforce the US growth divergence meme which will help to support the current USD rally. At some point, as the rest of the world catches up with vaccinations and growth, the USD will peak, and the focus will return to America’s twin deficits and forever stimulus. In addition to heavy data releases during this holiday shorten week, it is also month-end and quarter-end, which means rebalancing. 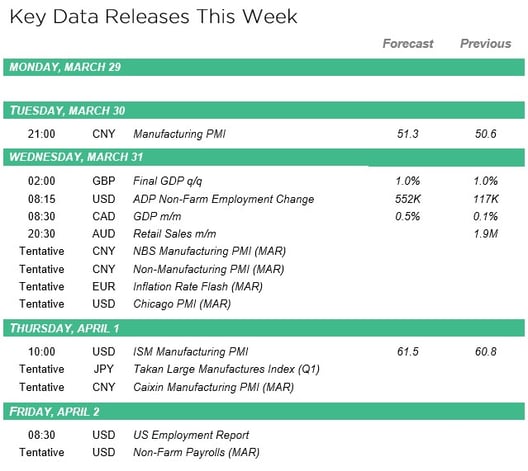