Vax On, Vax Off

Last week’s winners and loser in the currency market were driven by two narratives: the recalibration of negative interest rates and vaccine euphoria.

The New Zealand dollar was strongly bid on news that the Reserve Bank of New Zealand introduced a new loan facility that would reduce costs for lenders, while leaving its interest rate policy and bond buying program unchanged. The central bank also delayed the imposition of new capital buffer rules for a second time and upgraded its economic outlook. The market responded by removing the risk that a negative interest rate policy would be adopted, which had been priced in for next year.

Meanwhile, the GBP was up on the week on a combination of the unwinding of negative interest rate bets due to vaccine news (see below) and Brexit hopes. The bond market has completely unwound the prospect of negative rates in the 3-month interest rate futures contract, which were previously priced in for Q2 21. However, the UK bonds yields are sill negative three years out.

Brexit hopes received a boost on news of a call between US president-elect Joe Biden and Prime Minister Boris Johnson. Biden stressed the importance of the Good Friday Agreement and no hard border between Northern Ireland and the Irish Republic, and Johnson reportedly pledged to do so. However, the Withdrawal Agreement and the new Internal Market Bill would seem to undermine that pledge. The market seems to be looking past this fact because it knows that if this pledge is undermined then the chance of a trade deal with the US would diminish, as per Biden’s September tweet.

Monday’s announcement that Pfizer Inc’s experimental COVID-19 vaccine is more than 90% effective based on initial trial results caused the market to sell the safe-haven appeal of the Japanese yen and Swiss franc. While this is a seminal moment in the fight against the pandemic, caution is warranted since the trials have yet to be peer-reviewed or published in a medical journal. Also, the availability of the vaccine on a mass scale is still months, if not quarters away.

The rise in equity markets while the economy struggles with the pandemic is hard to understand. There are other factors at play here. When central banks engage in currency debasement and debt monetization, the quest for a return on your investment takes many forms. The classical response is to bid up hard assets such a gold, silver, and commodities. With the advent of crypto, Bitcoin and other digital assets can and will also benefit. For most investors, these options are a bridge to far, so they stick to what they know and that is part of the reason the stocks keep climbing. Its important to keep two things in mind: financial markets are not the economy and a vaccine is not a cure for the markets.

There are still many steps before a vaccine is available, and the most pressing health issue is the surge in the virus. The US surpassed 10 million Covid-19 cases and has set a new record for hospitalizations. The reality is that a new round of lockdowns is coming, or at the very least, self-imposed lockdowns for most people that care about their own health and the health of their loved ones and communities. While a vaccine may not be widely available until Q2, we are about to enter a second dip of this recession and financial market will have to retabulate the growth outlook. 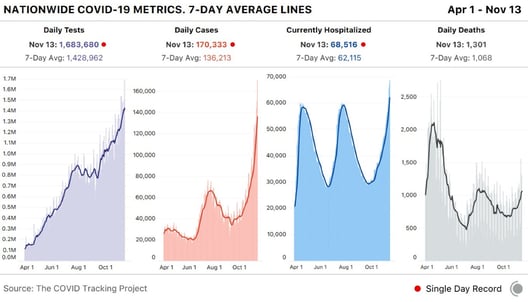 In the week ahead, China’s central bank will be meeting, and exiting some easing measures. Chinese data will also be front and center with a slew of data releases. Also on tap, US and UK Retail sales, Canada Housing and Inflation data, Australian Employment Change, and the first look at November manufacturing data by way of the Philadelphia Fed Manufacturing Index.