When the yen and the USD are the top performing currencies on the week then you know that risk aversion, aka risk off, was in full force. The selling that went on in the equity markets was driven by three distinct forces. Firstly, we had your typical month end rebalancing and window dressing. Secondly, with the election coming up there was some squaring up of positions ahead of headline risk on Tuesday. Lastly, the continued resurgence of COVID-19 cases in several countries is frightening governments into lockdowns that will likely lead to Q4 growth downgrades.

I understand that COVID-19 cases are rising but there is also way more testing happening than in the spring. Also, death and hospitalizations are not rising by the same trajectory as new cases. I don’t want to sound callous, but the virus has already impacted the weak in its first go around.

You will be shocked to know that after peaking in the spring, weekly death rates (for all deaths) in many countries are running well below normal for the time of year. 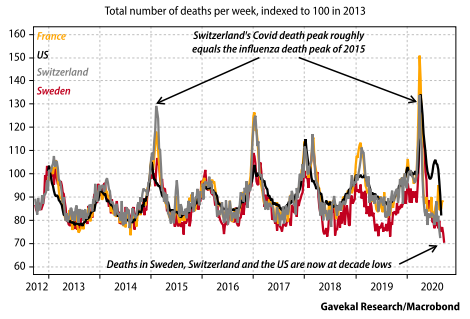 Both the Bank of Canada and the European Central Bank held their policy meetings last week. The BOC made some changes on the margins while the ECB primed the market for more stimulus at its December meeting, which will coincide with its new staff forecasts. Both banks reassured the market that they remain in favor of accommodation.

The euro was biggest loser last week, dropping by about 200 pips or 1.79%. The 5-day moving average fell through the 20-day ma while the momentum indicators are still flashing warnings. The RSI and slow stochastic are still falling and have not even begun to turn. If 1.16 gives way, it could fall all the way to about 1.1420. If the euro can hold the trend line, then it will remain in a consolidation zone between 1.2020 resistance and 1.16 support. 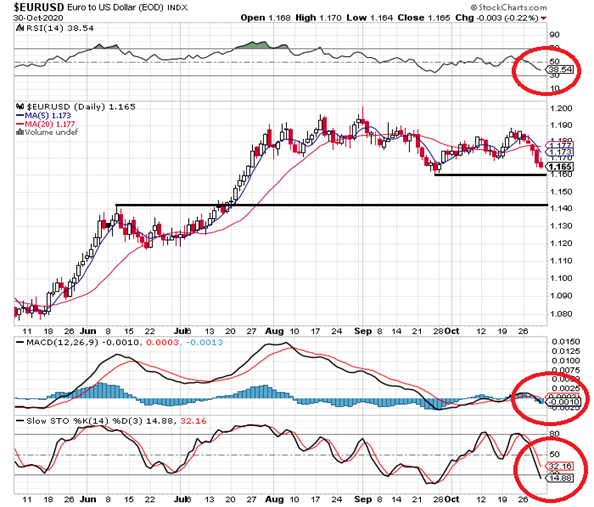 The CAD had its worst week since March, falling 1.46% against the greenback. Risk off and the sharp drop in oil, Canada’s biggest export, were the main drivers. The 5-day moving average sliced through the 20-day ma while the momentum indicators look like they are getting ready to turn. If 1.3420 gives way, it could rise all the way to 1.36. If the CAD can hold the trend line, then it will remain in a consolidation zone between 1.3420 resistance and 1.3050 support. 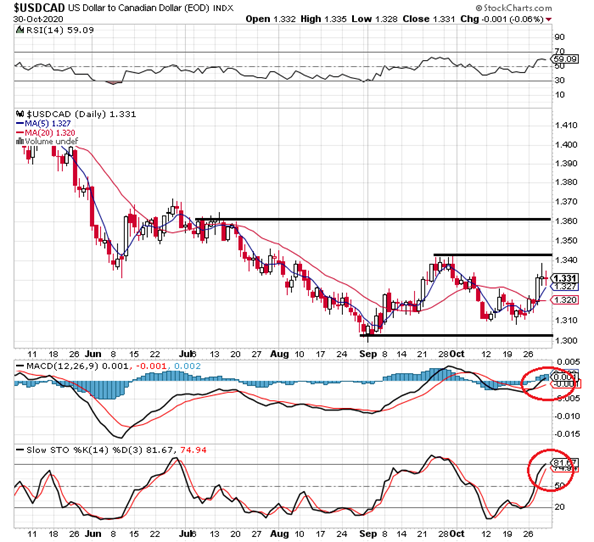 Last week, the Alberta government said it will stop setting monthly oil production limits in a bid to create jobs and to use available pipeline capacity. The limits have been in place since January 2019, which were enacted to protect the value of Alberta oil and prevent Canadian crude from being sold at discounted prices. This will only add to worldwide supply so there is no surprise that crude fell about 10.36% last week falling briefly below $35 a barrel for the first time since the end of May.

It is a very busy week ahead. Data wise, we will get final PMIs and jobs reports from both Canada and the US on Friday. There are three central bank meetings on tap. Both the Reserve Bank of Australia and the Bank of England may ease policy while the Fed will stand pat. And of course, the main event will be the US election – will we even know who wins on Tuesday night or will be stuck in the courts for months? It’s going to be a crazy week.