It is hardly surprising that the GBP is the worst performer on the week as Brexit fears weighed on the currency. As of this writing, the same three issues continue to plague a deal: governance (how any deal that is signed would be enforced), fishing (the UK is widely regarded to have been given a raw deal under the EU common fisheries policy and the UK wants to rectify this), and a level playing field (a clause that would ensure that neither side could undercut environmental, labour, or social standards). A last-minute deal would boost the GBP back over the 1.34 level. We don’t even want to speculate how low the currency could drop if a deal isn’t reached soon.

On the flip side, the AUD and the NZD were the top performing currency on the week. The rise in these two commodity currencies may be a reflection of rising demand from Asia and the global recovery in general (more on this later).

There were two central bank meetings last week from Canada and the Eurozone. The Bank of Canada kept their interest rate at 0.25% and continue to buy C$4B of bonds a week. These measures will remain in place until the economic recovery is well underway with an inflation rate on a sustainable path to its 2% target. The BOC did not address the recent rise in the CAD which allowed the market to continue to bid it higher, reaching 2-year highs. The CAD is up 4 weeks in a row against the USD and the momentum indictors are signaling that a pause in the price action is warranted. A move above 1.2860 would clear a path to the 1.30 level. Of course, if the Fed does something at this week’s policy meeting which would be construed has bearish then all bets are off and the CAD would power ahead to the next chart point, which lies around the 1.2530 level. 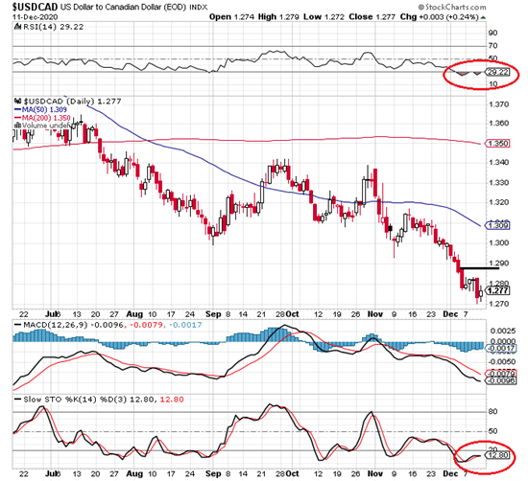 The European Central Bank also held its policy meeting last week. As expected, it increased its pandemic emergency purchase programme by €500B and extended the operation from six to nine months. The ECB also offered new targeted, longer-term refinancing operations to banks that will allow them to borrow up to 55% of the eligible loans rather than 50% and extended the terms on current TLTRO to June 2022. The ECB revised their staff forecasts as per below. 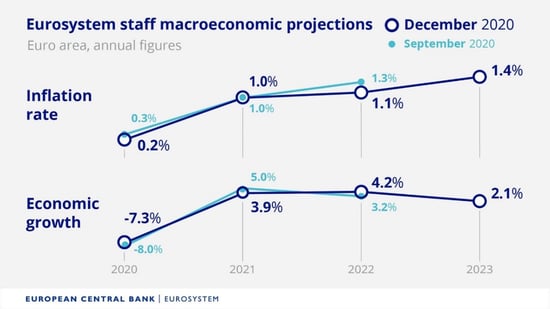 ECB President Christine Lagarde did manage to jawbone the euro down, a little, by restating in a post meeting news conference that the ECB does not target the exchange rate. If the euro remains above 1.20 level, the bulls will remain in charge.

Staying with central banks there are four central bank meetings this week. All four will, as the ECB and BOC did last week, strive to reinforce the notion that monetary policy remains on “easy street”, a situation with no worries, while Covid’s second wave disrupts the economic recovery.

The Bank of Japan will take a page out of the BOC and ECB play book and extend some of their programs. Meanwhile, no policy change is expected from the Swiss National Bank or the Bank of England. If, however, a hard Brexit (no agreement) was announced prior to the Bank of England’s meeting, then the bank could enact negative interest rates to help the economy deal with the negative shock.

The policy meeting for the US Federal Reserve has the greatest chance of fireworks. An extension of some of the Fed’s emergency lending facilities due to expire soon seem to be a given. What could send markets for a ride this week and sink the USD is if they update their forward guidance. USD bears would renew their selling if the Fed were to signal a prolonged duration of asset purchases with a shift towards longer-dated bonds.

By the way, former French Finance Minister Valery Giscard d’Estaing, who in the 1960s accused the US of enjoying an “exorbitant privilege”, died earlier this month of COVID-19 complications at the age of 94. He coined that phrase largely out of frustration, complaining that the US drew freely on the rest of the world to support its overextended standard of living. Ironically, the world is having renewed doubts about the USD’s reserve currency status as the country prints and spends its way through this crisis.

Now, some red shoots - have you noticed the rally in the red metal lately? Copper has been on fire since March and is up sharply over the last month. The recent surge is due largely to improved manufacturing activity in the US, the Eurozone, and China. 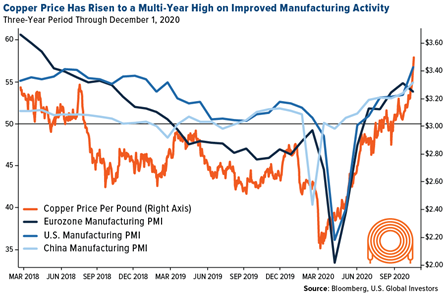 Mr. Market calls the red metal Doctor Copper because it has a "Ph.D. in economics", which allows it to predict turning points in the global economy. Because of copper's widespread applications in most sectors of the economy, especially renewable energy, its demand is often viewed as a reliable leading indicator of economic health.

And so ends our last weekly dispatch of 2020! It will be on hiatus for the next 2 weeks, returning on January 4th. 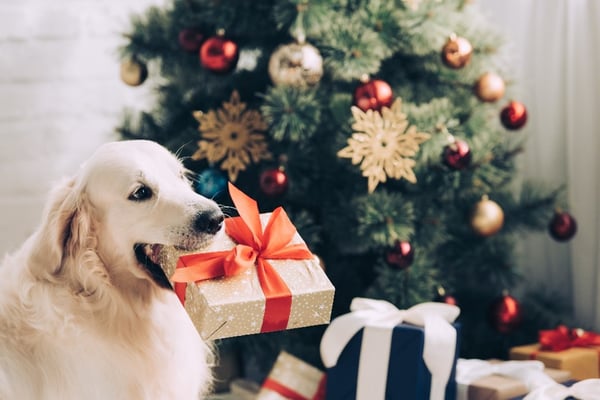 We wish you all the happiest of holidays and a much happier New Year!