The USD under-performed against the majors last week, except versus the CAD. The CAD was down a third of a cent against the greenback and is the worst performing currency on the one-year time frame with a loss of 3.75%. The CAD traded between 1.3850 - 1.4200 from April to mid-May and then bottomed at 1.33 in the first week of June. Since then, the USD has steadily moved up against the CAD and it looks like it may try re-enter the previous range, especially after the USD/CAD rate frayed the downtrend line that intersects the highs in March, May, and June.

Last month, the rating agency Fitch was the first to take away Canada’s AAA standing, citing rising deficit and debt levels in response to the pandemic. News that the Canadian economy created 925K jobs in June barely moved the needle for the currency. The accelerating number of Covid cases in the US, Canada’s biggest trading partner, is a downside risk to the domestic economy and the price of oil (Canada’s biggest export). The Bank of Canada under the stewardship of a new Governor, Tiff Macklem, and he is an unknown which may also be lending to the currency’s weakness. The BOC will make its monetary policy announcement on Wednesday, but no changes are expected.

The GBP was the best performing currency on the week and is up 1.72% in July, underpinned by Brexit rumours. The threat by UK Prime Minister Johnson earlier in the week to leave the trade talks with the EU unless it is more willing to compromise seems to have borne fruit. A seasoned Brussels journalist, Nick Gutteridge, reported that the EU's Michel Barnier is ready to make some significant compromises on behalf of the EU to get a trade deal agreed upon over the coming weeks. Gutteridge says Barnier is "ready to water down his red lines - but can only take the plunge if the PM shows willingness to compromise". According to Gutteridge, Barnier will offer the UK "a major olive branch by accepting euro judges won't play any role in the trade deal", and to soften his stance on fishing and the extent to which the UK will have to match European standards, according to the report.

The UK has a long list of market moving economic reports due to be released this week. Inflation, employment, June GDP, and trade numbers are on the calendar. Having said that, the bigger news may come from trade negotiations which are due to restart in Brussels this week.

Last week there was a report that the Trump administration may seek to undermine the Hong Kong dollar’s peg to the USD, as the administration considers options to punish China for its crackdown on civil liberties in the former British colony, according to people familiar with the matter. The US has weaponized its currency and economy for foreign policy influence for many years against countries such as Cuba, Iran, North Korea, Russia, Syria, and Venezuela, but never against an economic rival the size of China. This type of threat merely incentivizes China and other countries to de-dollarize. Let us not forget that former Bank of England Governor Mark Carney said that the world’s reliance on the USD “won’t hold” and needs to be replaced by a new international monetary and financial system based on many more global currencies.

Coincidentally, last week we saw gold break through 9-year resistance level of $1800 (which was highlighted as a possibility in last week’s dispatch), a death cross in the US dollar index, and a golden cross in the euro. All three of these developments emphasise the flow of funds away from the USD. 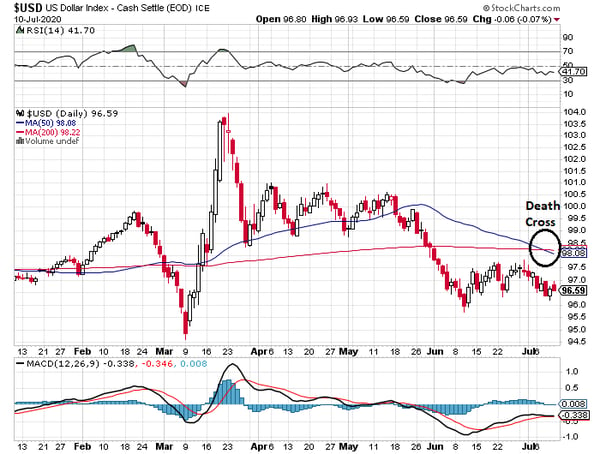 The euro, which makes up more than 50% of the US dollar index, is the mirror image of the index. The reverse of a death cross (the golden cross) was formed in late June, so one would expect that the euro to enter a bullish phase. This formation was a clue that the case for a weakening USD was slowly being formed. It has already occurred in the AUD and may happen in the NZD this coming week. 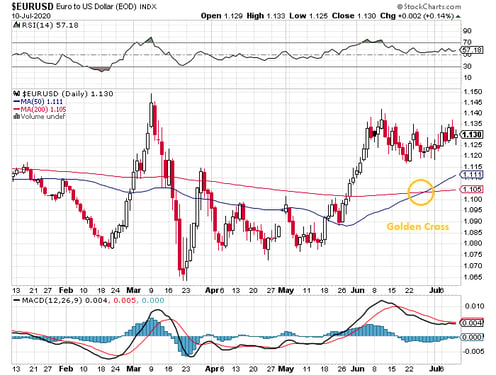 Arguably, the most important event next week is the EU summit which is supposed to resolve the dispute over the €750B Recovery Fund and the seven-year budget. The fund intends to offer a helping hand to countries worst hit by the coronavirus. The plan for €500B in grants and €200B in loans has yet to be ratified due to the objection of the frugal four. Austria, Denmark, Sweden, and the Netherlands are opposed to grants and are more inclined to make the lending conditional.

In the week ahead, besides the BOC, the Bank of Japan, and the ECB have policy announcements. For all three, it is time to reflect and take stock and not a moment to decide on any new action. As for economic data, the calendar is rather heavy and will compete for traders’ attention with the official start of Q2 earnings season and the latest Covid infection/death figures (especially in hard hit states like Arizona, Texas, Florida, and California).