The best performing currency of 2018 was the Japanese yen with a gain of 2.65% on the year against the USD.  It was the only currency to eke out a gain against the USD last year.  If the gain was due to Japan’s economic performance, then that would be a welcome development.  However, Japan’s economic progress in 2018 was spotty, at best, thus the gain in the currency was purely a risk off move.  Unfortunately, the risk aversion that has gripped the financial markets in the month of December, continues to rile markets as we begin the New Year.

On the last day of 2018, China’s official manufacturing PMI was released, and it fell to 49.4 in December, from 50.0 in November, the lowest reading since February 2016; and the weakest reading for a December since 2008.  Exports to the US kept growing at double-digit monthly rates through late 2018 despite President Donald Trump's punitive tariffs as US firms stockpiled inventory ahead of tariffs. But growth in exports to the rest of the world fell sharply in November and forecasters expect American demand to weaken in early 2019.

It’s not just China that is slowing down; on January 2nd the Eurozone PMI was released, and it fell to 51.4 from November’s 51.8, the lowest since February 2016 as new orders fell for a third month and business confidence eroded to a six-year low.  Eurozone's big-four continued to lead the slowdown with lowest PMI readings from the rest:

The US ISM manufacturing report also followed the global downtrend and confirmed worries about the impact of the US trade war.  It fell to 54.1 from 59.3, much worse than the forecast of 57.5, and it was the largest one-month drop since 2008. In particular, the new orders component cratered to 51.1 from 62.1 and the commentary within the report heavily emphasized the stress of tariffs.

Later in the day, confidence was really shaken, especially in the US, after the markets closed, when Apple reduced its sales outlook due to "unforeseen" slowdown in China.  The company this week issued a dire warning to investors about its business, announcing that it would miss its sales target for the last quarter of 2018 by at least $5 billion.  It's the first time since 2002 that Apple issued a reduction in its quarterly revenue forecast.

Apple’s announcement ignited a flash crash in the USD/JPY rate – the USD crashed against the yen dropping from around JPY109 to a slightly below JPY105 within a few minutes.  The fact the Japan was still closed for the holiday contributed to the lack of liquidity which made a move of that magnitude possible.  And just like that, the economic fundamentals aren’t looking so strong.

Fast forward to Friday, and all of Thursday’s loss in the equity markets were reversed by a combination of factors. First, China’s central bank announced a cut in its reserve requirements, which frees up liquidity to its slowing economy. It was the first general cut in the required reserve ratio since March 2016. Second, US economy added 312K jobs in December, much better than the forecast of 188K, and the most since February. Third, Fed Chair Powell seemed to appease financial markets with the notion of flexibility and patience which the market took as a hesitancy in raising interest rates – so much so that the Fed fund futures are now pricing in a rate cut in 2019 which is a stark contrast to the central bank’s forecast for 2 hikes. The result in the currency market was a huge risk on rally which left the USD and yen at the bottom:

Before you pop the champagne, let’s keep in mind that the Fed’s Quantitative Tightening program or balance sheet runoff, which from all accounts remains on “autopilot”, means collapsing liquidity.  Additionally, January will be a double whammy because it will be the first month following the termination of the ECB’s bond-buying program – perhaps a little caution is warranted instead of a celebration.  Here are some downside risks to consider for the New Year: 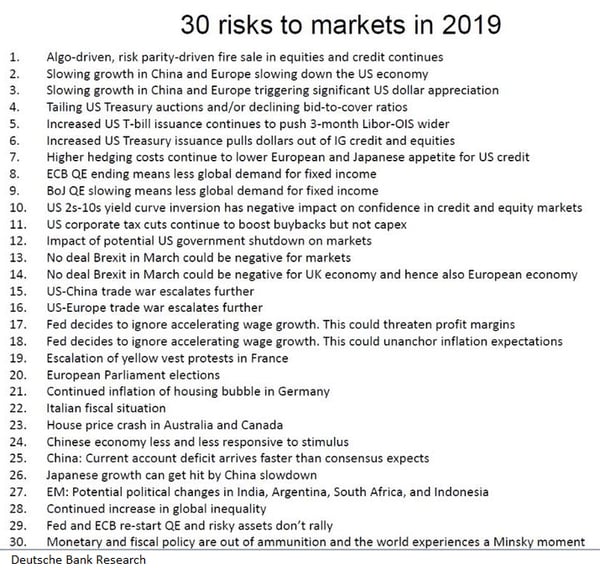 Here is a brief outlook for each major currencies that we follow.

As we explained in the onset, Japan’s economic progress in 2018 was spotty, at best which makes 2019 particularly challenging. The Bank of Japan’s crusade against deflation with its massive stimulus program has had little sustained success and will prove even more so this year when the Fed’s tightening cycle ends and with an economic slowdown of its main trading partner, China. The BOJ needs a weaker yen to create domestic inflation, but bouts of risk aversion cause the yen to rise due to carry trade unwind. Since the BOJ currently owns 43% of the government bond market and roughly 75% of equity market ETFs (this is not a misprint, they actually own that much – crazy) they may be out of policy tools. Furthermore, with other central bank curtailing monetary accommodation, this may prove too difficult of a task for the BOJ.

It was a cruel year for the Canadian economy. Canada’s largest export, oil, fell 25% on the year and is down a staggering 44% from its October peak. Canada had no choice but to agree to a renegotiated NAFTA deal, now known as the USMCA. The deal is worse for Canada than the old deal but that was to be expected since President Trump thought it wasn’t fair to begin with.The real kicker was the fact that Prime Minister Trudeau was unable to secure an exemption from steel, aluminum, lumber, and solar panel tariffs with the signing of the deal. Furthermore, the agreement contains a clause that allows the US to cancel the deal if Canada were to seek a free trade deal with a non-market economy, read China here. Looking ahead, after the swoon in oil a rebound can be expected, which with the help of a couple more interest rates hikes from the Bank of Canada, should help the CAD recover. Since this is election year, we should see the current government better its chances at the polls with some mild fiscal stimulus.

The Eurozone economy was progressing very well at the beginning of 2018 but it slowed significantly by year end as global trade tensions took their toll. Internal politics were also to blame as the populist movement continued to spread and has recently picked up steam with the “yellow vest” protests in France. The slowing economy and the growing political turmoil came at the worst possible time – the ending of the ECB’s bond buying program. In 2019, the challenges will be the possible fallout from a no-Brexit deal and the possibility that President Trump will turn his focus to European auto tariffs after he finishes with China.  With the central bank ready to normalize monetary policy and the lack of any type of fiscal stimulus due to strict EZ budget rules; the path ahead will be challenging. The only way the euro goes up is if the USD becomes less loved.

The fortunes of the GBP will revolve around Brexit. If the UK Parliament approve Prime Minister May’s plan next week then the currency should go up since it would offer the least economic disruption.The problem with May’s plan is that it doesn’t give the UK full sovereignty since Northern Ireland would effectively remain in the EU’s periphery due to customs and border between the two Irelands. Thus, if the hard line members of her party vote against it then that would open up the door to a no-deal Brexit, which would weigh on the currency.  Of course, there is option 3 – rinse and repeat – hold another Brexit vote.  This option would also cause the GBP to fall but not as much as the no-deal exit.

The US had a strong year in 2018 as both the economy and the currency grew. Having said that, the US is currently in its longest ever business expansion, approaching its 10th year and a safe bet is that it is closer to an end than a continuation. With the stock market weakening and borrowing cost rising, both the consumer and businesses will retrench. Also, with the Democrats now in control of the House of Representatives, political life for President Trump will become somewhat harder as evidenced by the current government shutdown. None of these factors will be good for the USD.

This year may finally be the year that debt and deficits matter. With the US deficit expected to hit $1 trillion, the Fed currently selling Treasury holdings off its balance sheet, and trade wars cutting export growth and thus foreign demand for Treasuries – who’s going to buy them?  This will cause yields to go up which in normal times would support the USD. But, these aren’t normal times - with trillion dollar deficits, protectionist trade wars, and an economy that is the last innings of the longest expansion on record, foreign buyers may shun the dollar. If this materializes, the commodity currencies of Canada, Australia, and New Zealand will be the biggest winners.