Black Friday couldn’t arrive soon enough for the USD as it had a very unpleasant week.  The USD fell out of favour yet again this past week on a political development in Germany that one would think would actually be more positive for the USD.  The USD broke higher last Monday on news that the attempt to forge a four-party coalition in Germany collapsed when the pro-business Free Democrats walked out of the negotiations last Sunday evening.  You may be confused considering that Angela Merkel won the German election for Chancellor in October.  However, her party did not win a majority and would have to forge an alliance with other parties in order to govern.  Please note that this is not something new in Germany but actually par for the course since Merkel’s previous reign was through a “Grand Coalition”.  The initial reaction last Monday was to sell the euro for the USD due to the fear of new elections, but this was quickly reversed as the week wore on when it was clear that other options remained.  Those options would be a minority government or another attempt at forming a coalition government with other parties.  Judging by the performance of the euro by the end of the week, Mr. Market isn’t too concerned about the German political situation.

In the Weekly Market Dispatch for October 30th titled “Monetary Convergence Divergence” we put up the chart below showing that the euro had broken down through the neckline of its head and shoulder pattern as the markets realized that monetary divergence, and not convergence was still very much in vogue - investors realized that the Fed will be busy raising rates and decreasing its balance sheet in 2018 while the ECB will not be doing anything except adding to its balance sheet.  At that time we suggested that there was not a lot of support between the neckline and the 1.14 level. 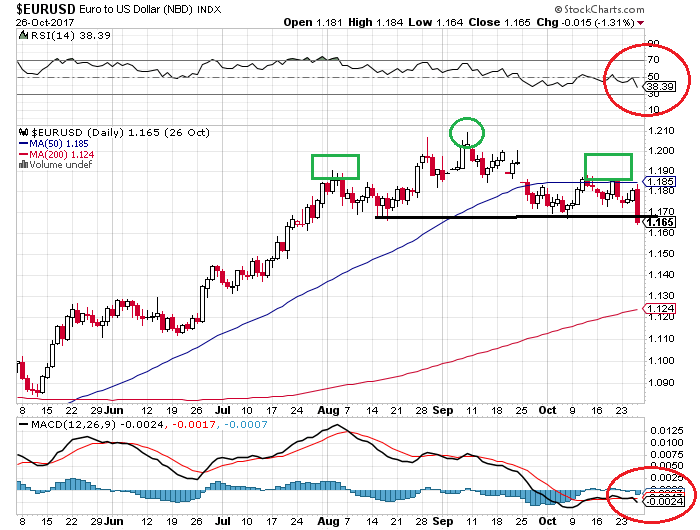 As it turned out, the euro managed to fall to the 1.1550 level before righting itself.  Fast forward to today, and the euro is now looking at a complete reversal of the prior technical bearish formation.  On Friday, the euro managed to break up through the neckline and the pattern suggests that it has the potential to reach the 1.2150 level.  The move is also being confirmed by the momentum indicators, RSI and MACD, circled in red below.  Keep in mind that this can easily unravel if the German political process becomes more complex with the calling of a new election.  The fear is that a new election could risk a better showing for the populist AfD, Germany’s third largest party. 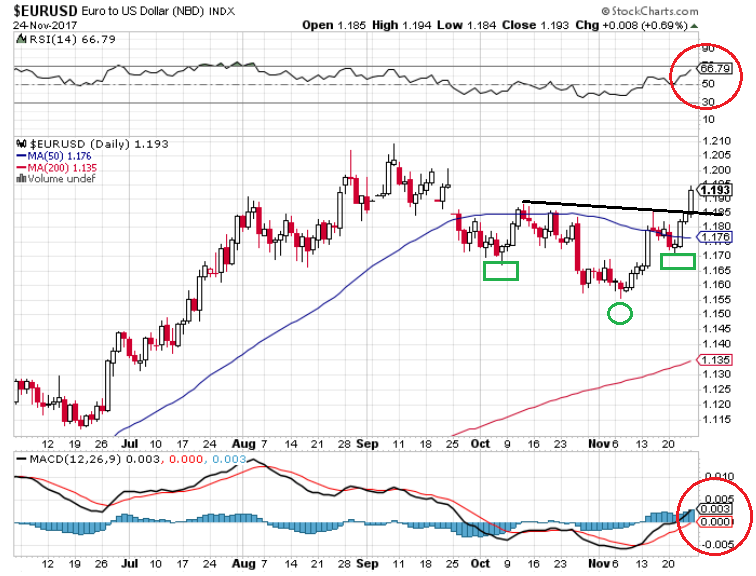 Movember is an annual event marked by the growing of moustaches by men during the month of November to raise awareness of men's health issues, such as prostate cancer, testicular cancer, and men's suicide.  We titled this piece Black Movember, not to highlight the event, but to point out that November has been a very bad month for the USD.  Month to date, the USD is down against every major currency except the AUD.

With four days left in the month, the AUD may very well escape the basement with a bit of luck.  In fact, the only reason that it is the worst performer on the month is not because of economic data but rather than political drama.  You see, the Australian government has lost its majority due to the loss of eight politicians over dual citizenship.  The problem is that some sitting members of Parliament were found to be citizens of Australia plus one other country, which according to Section 44, is not allowed under the rules of Parliament.  This rule was designed to make sure everyone in the Australian Parliament was putting the country’s interests first.  Ironically, the issue has already cost the Deputy Prime Minister and senior politicians from every major political party their jobs and could lead to a change in national leadership if it worsens.  The eight politicians were found to also be citizens of Britain, Scotland, New Zealand, and Canada.

Speaking of Canada, this will be a very important week for the CAD.  The CAD was able to take advantage of the downtrend in the USD despite a softer than expected Canadian retail sales report on Friday.  Consumer spending grew only 0.1% in the month of September, which was significantly weaker than the forecast of 1%.  The report reinforced the notion that the Canadian economy has cooled off substantially in Q4 after a four consecutive quarter advance of more than 3.5%.  Furthermore, very little progress has been made at the latest NAFTA talks.  While the price of oil has moved higher, this week’s GDP and employment report could reinforce the view that employment and trade activity have deteriorated since the end of summer.  Softer reports could take CAD back towards the 0.7770 level while strong ones would target the 0.8000 level.