Any time the Japanese yen is the top performing currency for the week, you know that the mood of the market is risk aversion, aka “Risk Off”. The resurgence of Covid-19 cases in several countries is frightening governments into lockdowns and will likely lead to Q4 growth downgrades. The inability of the US political parties to agree on additional fiscal support and the UK playing chicken with the EU in Brexit talks only added to the market’s anxiety.

The Australian dollar was the only currency to lose more than 1% last week. The currency was weighed down by last week’s speech by central bank governor Philip Lowe, which signaled that more monetary easing was in the pipeline. He said his board had been considering what more it could do to support jobs, incomes, and businesses.

"When the pandemic was at its worst and there were severe restrictions on activity, we judged that there was little to be gained from further monetary easing," Dr Lowe said. "As the economy opens up, though, it is reasonable to expect that further monetary easing would get more traction than was the case earlier.

Interestingly, the USD did manage to outperform all the majors last week (except the yen) and risk aversion may have not been the only driver. The likelihood of a so-called “blue wave”, which would see Democrats gain control of both houses of congress, is starting to be priced into the market. Markets appear to be less concerned about the possibility of a contested election result, as evidenced by the flattening of the US VIX Futures curve in recent weeks.

The chart above shows that over the last 30 years, the USD weakened under Republican Presidents, while the opposite happened under Democratic Presidents. I would caution anyone reading too much into this trend since the economic circumstances are different this time around. For one, a Democratic blue wave would unleash a huge spending binge that would only highlight the bearish outlook for the USD due to the twin deficits. The US just reported its largest monthly trade deficit in a dozen years, and it appears poised to set a record in the coming months. Next year, the US budget deficit is forecasted at around 10% of GDP, well above the other G7 countries.

This reminds me of the 1971 comment by US Treasury Secretary John Connelly: “The dollar is our currency, but it is your problem.” It’s certainly a problem for the global economy, which is why last Thursday the head of the IMF, Kristalina Georgieva, was calling for a global reset.

“Today we face a new Bretton Woods moment. A pandemic that has already cost more than a million lives. An economic calamity that will make the world economy 4.4% smaller this year and strip an estimated $11 trillion of output by next year. And untold human desperation in the face of huge disruption and rising poverty for the first time in decades,” she said.

This concept of a new financial framework was also floated in August of 2019 when the then-Governor of the Bank of England, Mark Carney, called for global monetary system to replace the USD. Back then he said that the world’s reliance on the USD “won’t hold” and needs to be replaced by a new international monetary and financial system based on many more global currencies. Carney suggested more thought should be given to creating a global electronic currency that could act as “synthetic hegemonic currency […] provided […] perhaps through a network of central bank digital currencies”.

Interestingly, on Monday, the IMF is holding a conference on digital currencies and cross-border payment systems. Coincidence? Unlikely. Just last month, the ECB reiterated that a digital euro is coming soon.

Digital central bank currencies (DCBC) will not only change monetary policy, but it will also change fiscal policy.

Right now, the Fed’s QE program doesn’t print money it only prints reserves. QE is only helping the monied interest and the top 1%. Commercial banks are the ones that print money by lending. In the current crisis, the banks are not lending. If the government had a digital dollar, they could send stimulus money directly to the people. The people would then spend the digital dollars, which would spur economic growth (trickle up economics).

On the fiscal side, governments will now be able to manage fiscal policy, outside of governments balance sheets. For example, they will be able to offer direct transfers to low income people while charging negative interest rates to large savers.

Of course, this would not change the fact that the system would still be based on fiat currency system - making it digital only speeds up the currency debasement. Thus, the case for gold and Bitcoin would continue to be the only way to protect your net worth. I would argue that DCBC would allow Bitcoin to flourish as digitization of currencies make the on and off ramps to Bitcoin more convenient. 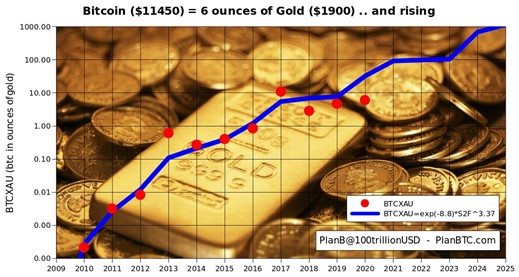 A couple of years ago I was speaking to a millennial about gold and Bitcoin and he told me that gold was a “boomer thing”, something his father would do. He used Bitcoin to protect his wealth instead of gold because there will only be 21 million Bitcoins ever created while gold’s supply, while not finite, is still being mined. In the world that we are moving into, I guess Bitcoin is already the blueprint for a decentralized reserve currency.

I’m starting to think he was right; the digitalization of the financial system may allow Bitcoin to take over gold’s role in the new Bretton Woods. I might have to reconsider my position and start thinking about selling my physical gold for more Bitcoin.

In the week ahead, speeches, data, and negotiations will be the key drivers. Various central banks will continue to parade out their policymakers, giving speeches that reassure the public that they have are “our backs” and that they will continue to stimulate if the need arises. On the data front, preliminary global manufacturing and services PMIs, the first survey data for the new month, are on tap. Despite the heightened negativity of a no-deal Brexit and Friday’s UK’s sovereign rating cut to Aa3 by Moody’s, talks between the UK and the EU will continue in the coming week.