Last week, the preferred metaphor of the financial media was “bazooka”. Although it was overused, it accurately described the actions of governments and central banks in dealing with the economic fallout of the ongoing coronavirus epidemic. Let’s take a brief look at what our betters were up to.

In the US, the Fed fired the first shot last Monday with an announcement of what appears to be unlimited quantitative easing (QE). Meanwhile, the US government finally managed, after political delays and squabbling, to pass its $2 trillion+ relief package for US workers and employers. The overnight Fed Funds rate now stands at 0 – 0.25% and is expected to remain at this level at the next meeting on April 29th. Fed chief Jay Powell has made it clear that the Fed has no intention of introducing negative interest rates in the US, citing the generally adverse effect of such policies elsewhere. However, unforeseen may force his hand.

On Capitol Hill, after the usual politicking and scrambling, the Senate managed to cobble together a relief bill which was eventually passed by the House. A shell of impressive size, over 2.0 trillion USD representing almost 10% of GDP will go to hard-hit American workers and companies, especially small businesses.

In the True North, in a surprise move the Bank of Canada cut the overnight rate 50 basis points last Friday to 0.25% while announcing its own version of QE, committing to purchase weekly a minimum of 5 bil. government bonds. In Parliament, the ruling Liberals announced a stimulus package. It was another impressive rocket of around 85.0 billion CAD and, with further announcements, the total may well come to almost 200.0 billion CAD (according to one bank economist). This last figure represents over 10% of Canadian 2019 GDP of 1.75 trillion. 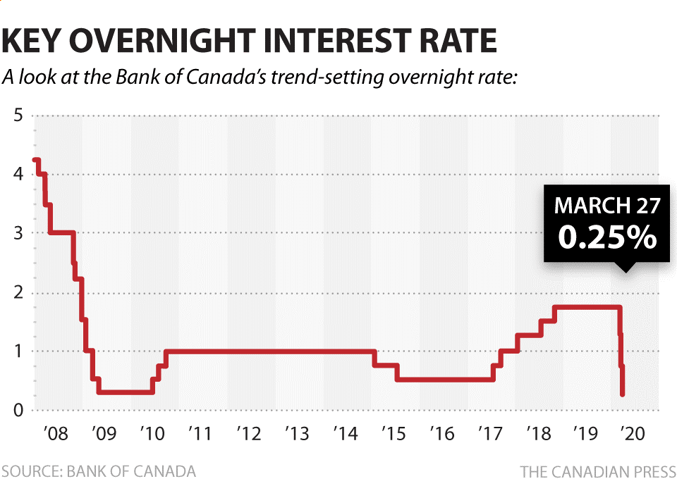 The loonie was hit hard by the decline in crude oil prices, with Western Canada Select (WCS) now trading well below $5.00 USD/bbl. The ongoing shoving match between Saudi Arabia and Russia shows no sign of abating. The greenback was the loser on the week as investors shunned declining US treasury bond yields and parked their capital elsewhere.

In the current stressed environment, economic statistics are largely (but not completely) irrelevant. Most numbers now being released reflect the economy pre-virus, so this week’s US jobless numbers will be of mostly academic interest. However, the weekly jobless claims numbers (which we believe is a better and more timely measure of the labour market) will be released on Thursday and should bear close analysis. Canadian jobs numbers are due out April 9th, so they may show some effect from the coronavirus.

Please be sure to visit our blog for our latest company-updates regarding the currently COVID-19 crisis.

Additionally, we recommend you be wary of ongoing fraud attempts surrounding this crisis. Here are some useful resources for our North American readers: