I’m going to let you in on a little secret: there’s not going to be a V-shaped recovery. Shocking, isn’t it? Economic reports from most of the major economies continue to show that the pace of the Covid recovery has slowed. For evidence, look no further than last week’s US industrial production and retail sales for the month of August. Industrial production rose 0.4% in August, a much smaller gain than in the prior two months, while retail sales rose 0.6% in August and the July report was revised to 0.9% from 1.2%.

As you can see from the charts below, the Economic Surprise Index shot higher from the depths of the Covid crash in April with the help of expanding global central bank balance sheets and trillions of dollars in government fiscal support. By August, much of the support started to fade as economic data was no longer beating estimates to the upside, causing a deceleration in the growth trend. 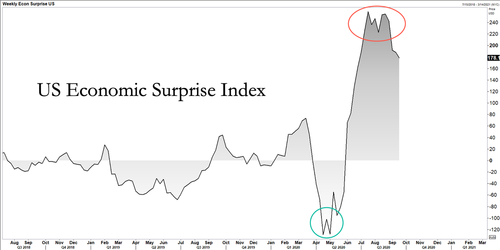 There were 3 central bank meetings last week and none of them provided any new information, other than to reinforce the current theme of lower interest rate for longer. The Bank of Japan left its aggressive monetary stimulus untouched, as expected, and the market rewarded that action by bidding up the yen to the top of the weekly performance chart.

Meanwhile, the Bank of England left interest rates unchanged and maintained its current level of asset purchases but prepared the market for the possibility of taking interest rates negative. The UK faces three main challenges:

The US Federal Reserve was also front and centre with their policy meeting last week and they did not surprise the markets. Without offering any new initiatives, it was able to deliver a dovish message by way of it dot plot projections. The bottom line? 13 of the 17 officials expect that rates will need to stay at the 0-25 bps until 2023. 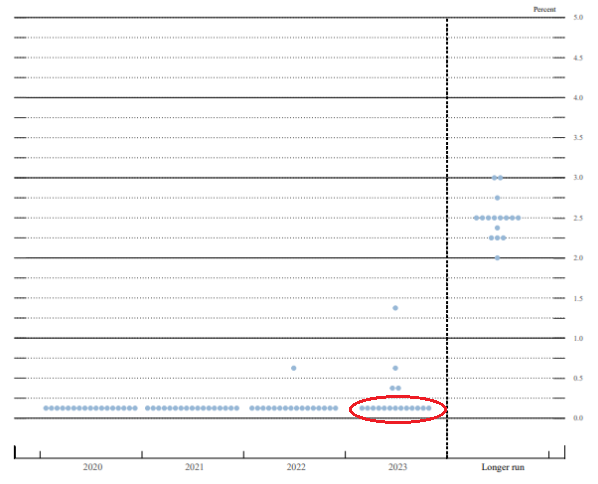 The Fed also reiterated their 2% long run inflation target, stating that with inflation running persistently below this longer run goal, the Committee will aim to achieve inflation moderately above 2% for some time so that inflation averages 2% over time and longer-term inflation expectations remain well anchored at 2%.

I have two criticisms of the Fed’s stance. Firstly, in the post-meeting press conference, Fed Chair Jerome Powell said that three years of no rate hikes is essentially forward guidance and he expressed his view that this is a “powerful” stimulus.

I don’t see it that way. In fact, I would argue that it is the exact opposite. The whole idea of stimulus is to cause people and businesses to act now instead of waiting for later. Telling them that rates will stay near zero for 3 more years doesn’t incentivize them to act today.

As for the 2% inflation target, the Fed’s mandate is to provide for “stable prices” not annual price increases of 2%. A 2% inflation rate will cause the price level to double every 35 years. As a consumer, why would I want that?

I’m not going to worry too much, however, because based on the Fed’s track record, I don’t think it will happen. These ultra low interest rate policies have been in place since the great financial crises of 2008 under Bernanke and Yellen, and we are still stuck with anemic growth with little or no inflation. Why will this time be any different?

Contrary to popular thought, the Fed’s quantitative easing program is not a “money printing” operation. When the Fed buys bonds from the primary dealers (major banks) it credits the bank’s reserve account at the Fed. These reserves can’t be withdrawn, it only allows the banks to create more loans against those reserves. The actual “money printing” happens in the banking system, since banks can loan up to 10 times against those reserves.

The problem is that there is no demand for borrowing. If there was demand for loans, then those borrowed funds would be deployed into the economy. This would cause the velocity of money to increase. The velocity of money is a measure of the number of times that the average unit of currency is used to purchase goods and services within a given time period. As you can see from the chart below, the velocity of money has been steadily decreasing since the 1980s. The only thing QE does is allow the Fed to monetize the increase in government debt.

Without an increase in the velocity of money there is no sustained inflation. In the chart below, you can see that US inflation has steadily decreased since the 1980s as well. One reason for this would be technology. Technological improvements drive down the price of every sector that it is applied to.

The other reason is demographics. In the western world, there hasn’t been a generation as big as the baby boomers to pick up the slack of consumption. Baby boomers have been leaving the workforce since 2010, selling their houses, stocks, and bonds and generally spending less money. Thus, the Fed can try to increase bank reserves all they want but they can’t make babies.

In my mind, the inflation/deflation argument isn’t even an argument. We will continue to experience deflation as incomes, cash flows, and tax revenues to consumers, businesses, and governments continue to be impaired by Covid complications leading to solvency issues. Central banks, try as they may, will not be able to inflate the debts away. At this pace, the only thing that central banks will achieve is to debase their currencies to the point where the only inflation they will achieve is hyperinflation, which isn’t due to runaway price increases but rather the deteriorating value of their currencies. 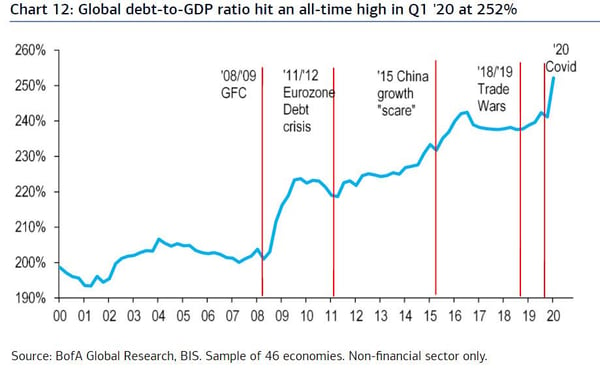 There is a lot of news in the week ahead, however most of it is second tier and not likely to move markets. Having said that, several policy makers are scheduled to speak, as well as US Senate testimony from Fed Chairman Powell and Treasury Secretary Mnuchin. Also on tap is the RBNZ interest rate decision on Wednesday.