The past week witnessed an escalation in Sino-US trade tensions, an aggressive stance taken by Chinese authorities with respect to Hong Kong, and a surprise economic announcement by, again, the Chinese government.  Any one of these three actions would be tension-provoking; all three coming in the same week suggests a crisis atmosphere. Elsewhere saw continuingly awful economic numbers as the COVID-19 pandemic dragged on, while outgoing Bank of Canada governor Stephen Poloz struck a surprisingly upbeat tone in remarks to journalists. Let’s take a look, starting with a brief review of China’s not-quite-so-wholehearted embrace of capitalism.

Prior to February 1972, when US president Richard M. Nixon (a staunch anti-communist) visited mainland China or, as it was termed in those days, “Red China”. There had been no diplomatic ties or any sort of communication whatsoever between the two countries after communist forces ousted the nationalist government of Chiang Kai-shek in 1949. From that point, under the tyrannical rule of Mao Zedong and the Chinese Communist Party, China was doctrinaire Marxist-Leninist in its political and economic set-up (adjusted for Chinese peasants in place of European workers). China was also vociferously anti-western in its outlook and reserved a special enmity for the United State. 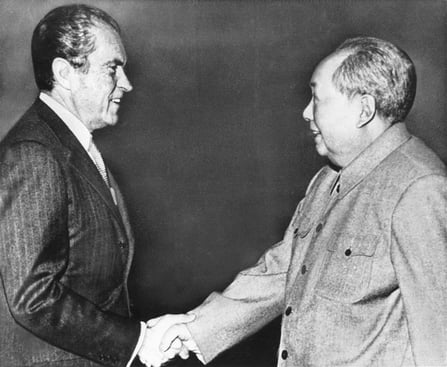 This visit by President Nixon was part of a larger attempt by the Nixon administration, engineered by the legendary Henry Kissinger, to ramp down Cold War tensions with both China and the Soviet Union.

After this Opening of China, reform politicians in the Communist government worked assiduously to improve the state of the Chinese economy while ensuring the primacy of the Party. Economic growth had averaged 2.9% annually from 1950 to 1973, with major disruptions from the disastrous Great Leap Forward plans and the late ‘60s Cultural Revolution. Other countries in the region, such as Japan and South Korea, had adopted western capitalist-style methods and their economies were booming, while China’s was not.Following the passing of Chairman Mao in September 1976, reformists went to work.

Agriculture was de-collectivized, entrepreneurs were permitted to start businesses, and foreign investment was welcomed while most industry remained state-owned. The second round of reforms, commencing in the late ‘80s under the leadership of Chairman Deng Xiaopeng, witnessed vast de-regulation and selling-off of state enterprises. From that point, the private sector grew to almost 70% of the Chinese economy by 2005. From 1978 to 2013 the economy grew steadily, with annual GDP growth rates in the range of 9.5%.

Fast forward to today: the Chinese leadership finds itself beset by a myriad of troubles. Many feel the COVID-19 outbreak in Wuhan was manifestly not well-handled and many nations are demanding accountability from Beijing. Economic growth is fading rapidly, with 2020 growth expected at under 2.0%, well below the prior year’s +6.1%, and the recently announced further repression of Hong Kong has angered many western nations. The status of the latter as a financial linchpin may be in jeopardy.  Tellingly, the Party did not set a goal for 2020 economic growth - the first such omission in 30 years. (It is possible that party officials do not wish to reveal the extent of problems in the domestic economy).

Trade disputes with both America and other trading nations may be in the offing. China’s continued membership in the World Trade Organisation gives the country a large measure of protection against tariff mischief.  Should the Party’s aggressive actions in Hong Kong and elsewhere continue along with stonewalling over the COVID-19 issue, the country may find itself under harsh criticism from its partners in the WTO. China could then decide to leave the WTO, and then trade disputes will be a fact of life for the leadership. Most ominously, a sharp decline in growth coupled with potential huge job losses in China’s vast manufacturing sector may lead, in the eyes of the Party, to restiveness in the population - something to be avoided at all costs.

2021 marks the centenary of the Shanghai Workers Party, the forebear of today’s Chinese Communist Party. Current chairman Xi Jinping had anticipated announcing next year that the Chinese economy had surpassed the American economy in size. That hope may have been premature. 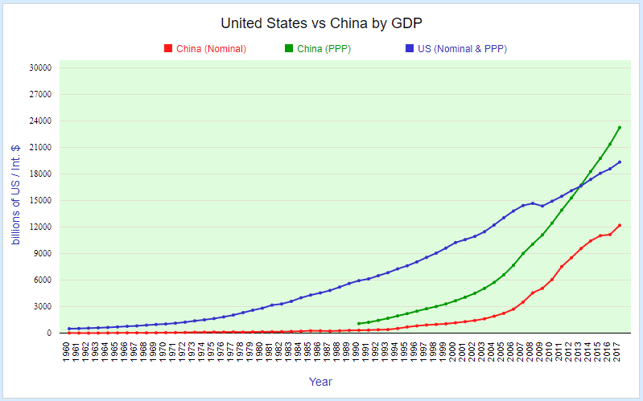 The WTO released its Goods Trade Barometer, a recently devised metric that showed a sharp decline in global trade during the first half of 2020. The index has a baseline of 100 and currently stands at 87.6, leading analysts to expect a drop of from 13% to 32% for the entire year.

A survey of investment fund managers by Bank of America revealed great scepticism about a near-term global economic recovery. Respondents were asked their view of global Purchasing Manager Index (PMI) and here are the results: 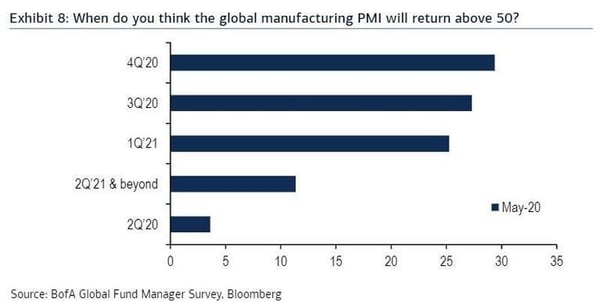 Don't Be So Gloomy

In his last press conference before handing over the Bank of Canada governor job to Tiff Macklem, outgoing governor Stephen Poloz waxed somewhat optimistic on the economic outlook.

Governor Poloz added that the vast amounts of fiscal stimulus set loose by the federal government in Canada and elsewhere, in his view, would be sufficient to engender a strong recovery, possibly even V-shaped, although he pointedly did not use the term.

“I’m relatively optimistic, what I find, compared with what the talk is.”

He believes the shock will be, if not fleeting, at worst transitory and likely will not trigger the changes in behaviour usually associated with serious downturns, such as 1981-82 and the Panic of 2008. Further, the Canadian economy is tracking the Bank’s prediction of a sharp 15% decline in production, its best-case scenario. Governor Poloz believes that if this holds, “you should see a very rapid return to production.” Even if there is damage to the economy, such as firms closing, innovation and entrepreneurship will see new companies created to take up the slack.

The week sees a number of economic metrics released on both sides of the border, all of which will be ghastly until this COVID-19 business fades. A limited amount of Fedspeak on tap, with Fed boss Jay Powell speaking on Friday. Of note will be quarterly earnings slated to be released over the course of the week by Canada’s six major chartered banks. While the earnings results will be interesting, the loan loss provisions will be very interesting.