With the subdued 2020 Christmas season and that whole distasteful year currently fading into the past, investors can now take a fresh look at economic prospects going forward in 2021. Judging by several important metrics, it appears they like what they see (at least in the second half of 2021).

The DJIA, TSE, and S&P 500 all hit record highs last week as players looked beyond the current muddle to the second half of 2021 and the much hoped-for Roaring Twenties 2.0 reboot. An important signal emerged from the bond market as 10-year treasury bonds traded above the 1.00% level (more below). Mr. Market actually has good reason for optimism despite the rather grim jobs numbers released on both sides of the border last Friday (more below).

In no particular order, the following are what appear to be driving rising market confidence:

In recent weeks, the takeaway for investors has been RISK ON. While the USD has attempted to rally back on occasion from its oversold levels, there are still plenty of sellers willing to short the greenback and go long investment opportunities elsewhere.

There were some key economic metrics released last week. Let’s take a closer look at the labour market in North America and how it is faring as this interminable Covid business drags on.

In Canada, December jobs numbers at first glance disappointed to the downside. Analysts has called for a loss of -27.5K jobs and a jobless rate of 8.6% - in the event, jobs lost totalled -63K and the rate did rise to 8.6% from the prior 8.5% as expected. However, on a positive note, while the economy shed -99K part-time jobs, still it generated +36K full-time jobs, always a good thing.

In the US, weekly jobless claims came in below street calls of +800K, beating the consensus at +787K. Following the run-up in early December, claims had been edging downward but appear to be hitting a plateau as the year ended. 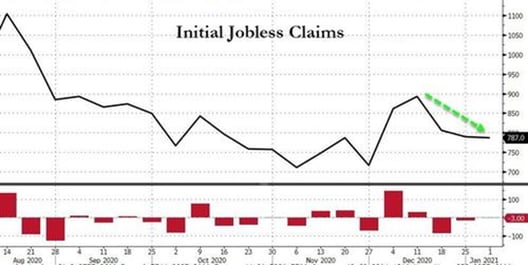 The payrolls number for December surprised to the downside, a major miss as analysts had called for a rise of +50K jobs. The economy lost -140K jobs while the jobless rate held firm at 8.7% vs call of 8.8%. To little surprise, most of the losses were concentrated in the hospitality and leisure sectors.

Initially markets sold off on the news but, in a classic example of “bad news is good news”, rallied on expectation of that much more stimulus to come from Washington. 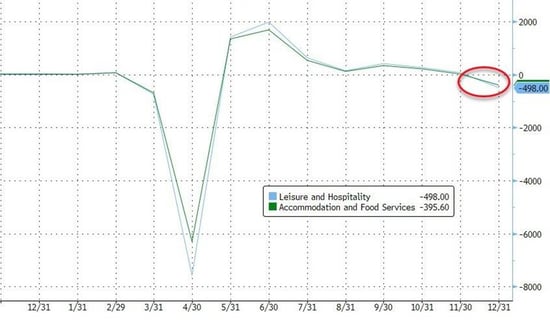 As mentioned earlier, 10-year treasury yields finally bounced back above 1.00%, the level under which they had been stuck since last spring. We spoke with our friend the bond salesman about this, and he was of the opinion that, with economic recovery near at hand, bond yields all along the curve – outside of the short end where central banks are suppressing rates – may possibly continue moving higher. This could be a good thing, he continued, as a positively sloped yield curve – the more positively sloped the better – is a very good thing for banks and could help shore up their balance sheets. When we asked how the Fed would react if the 10-year rose from its current level of around 1.10% and took a run at 1.50% or even 2.00%, he declined to speculate.

CAD gained some support from a rally in oil prices. WTI traded north of $50 USD/bbl for the first time in almost a year. Recall the ruinous price war between the Saudis and the Russians last winter, timed right in the middle of the Covid pandemic. Lessons apparently having been learnt, the Saudis have agreed to a production cut of 1.0KK bbl/day, starting in February and March, while Russia will be permitted a small increase.

Analysts are calling for rising crude prices in H2, as the global economy stabilises and moves firmly into recovery mode. While potentially a positive for the loonie, rising oil prices may tempt cash-strapped OPEC producers to skirt their official quotas. Time will tell (and American frackers are still a wild card).

We would like to end this blog with a brief discussion of the meteoric rise of Bitcoin (BTC) in recent weeks, what it implies about central bank suppression of interest rates, and how it stands as a perfect example of price discovery – a concept we have mentioned before in previous blogs. (We bow to our colleague Tony Valente and his encyclopaedic knowledge of so-called “crypto-currencies”. Our outlook, while informed, is based on that of supply and demand).

The chart below shows Bitcoin price action since the beginning of the 2021. There isn’t much doubt what is happening here. 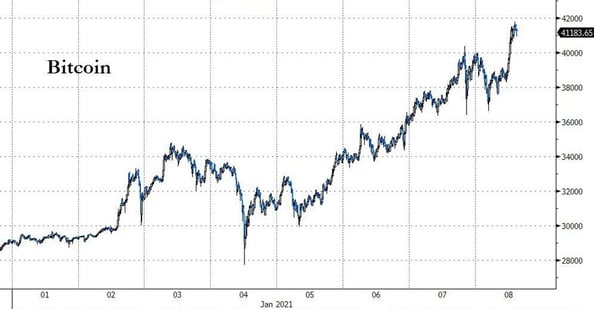 It is important to understand that Bitcoin is currently in the process of price discovery. That is comprises of the messy actions of bidding and offering, countering, hitting bids, paying offers, and so on: a chaotic function that actually works. All things that have a market value, such as those not set by government fiat, have value set by these market forces. It is also important to remember that value shifts as economic, social, and political factors change.

The issue with Bitcoin is that no one knows what it is worth. We know that the ultimate supply will be 21 million bitcoins, expected to be reached by 2040. That will be the maximum supply, no more. This makes Bitcoin attractive as a store of value, as it will not be diluted by any increase in the supply of bitcoins. Gold is losing favour, somewhat, as a store of value because, as its price rises, uneconomic gold mines suddenly become profitable, leading to an increase in the supply of gold and declining prices (much like the OPEC Paradox). This will not happen to Bitcoin.

So how much are you willing to pay for this apparently solid store of value? What’s your bid?

As we have pointed out before, starting with the Panic of 2008 but possibly as early as the Crash of 1987, global central banks arrogated to themselves the process of price discovery in interest rates. So, rather than rely on the collective wisdom of the market, central bankers rely on themselves alone. The results of that misplaced faith should be clear for all to see, with sluggish global growth since 2008 and negative interest rates. Bitcoin does an end-run around central banks by de-centralising monetary value and placing it in the hands of individuals. It is in effect, as one BTC investor put it, “a vote against central banks”. Should central banks continue to debauch currencies and manipulate interest rates for the benefit of their national governments, Bitcoin may continue to rally.

The coming week sees a mix of Fedspeak, secondary economic metrics in America but little to report in Canada. There’s also plenty of Fedspeak on tap.