The Winds of Change by the German Rock Group Scorpions was written after the band visited the Soviet Union and experienced the Perestroika movement first-hand. The Russian meaning of “perestroika” is reconstruction, and the band was witnessing the reconstruction of the Soviet Union’s political and economic system from communism to a more western-style democracy with a market-based economy.

Not sure where I’m going with this, but one thing is for sure: our western style economic system has strayed from its capitalist roots due to the heavy influence of central bank monetary policy. With a flood of central bank (16) meetings last week, the winds of change of monetary policy are turning slowly away from Covid’s “easy money” era.

The central bank of Norway, Norgs Bank, became the first G10 central bank to begin normalizing rates post-Covid with a rate hike of 25 bps. It is also worth noting that Norway ended all of their coronavirus-curbing restrictions in a bid to return to a normal society. Some 76% of all Norwegians have now received at least one dose of a COVID-19 vaccine, while 67% of the population is fully vaccinated. Yes, there is hope. 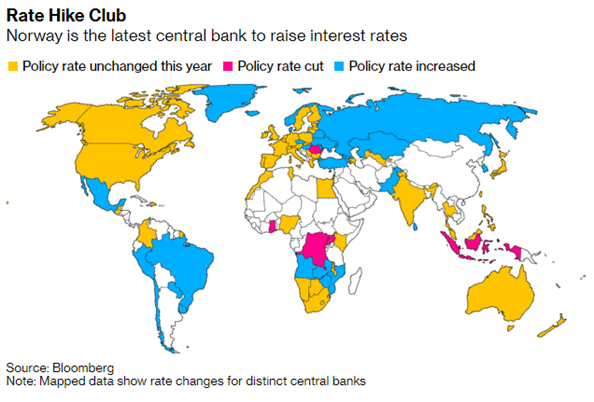 Of the four major central bank that had policy meetings last week, only two (the US Federal Reserve and the Bank of England) had the most market impact. The other two, the Bank of Japan and the Swiss National Bank, maintained their statue quo.

The Bank of England kept monetary policy unchanged, opted to stick to its asset purchase target of £875 billion, and downgraded economic growth projections for the third quarter of this year. However, the case for policy tightening appeared to gain some momentum, as Deputy Governor Dave Ramsden joined Michael Saunders in voting for an early end to the BOE’s program of government bond purchases.

The Bank of England raised the prospect of hiking interest rates as soon as November to contain a surge in inflation, which it now expects will exceed 4% following a spike in energy prices. It noted that “modest tightening” in policy was foreseen over its forecast horizon in August, and “some developments during the intervening period appear to have strengthened that case, although considerable uncertainties remain”. The central bank also agreed that any future tightening should start with an interest-rate increase, even if that “became appropriate” before its bond-buying program finishes around the end of the year. 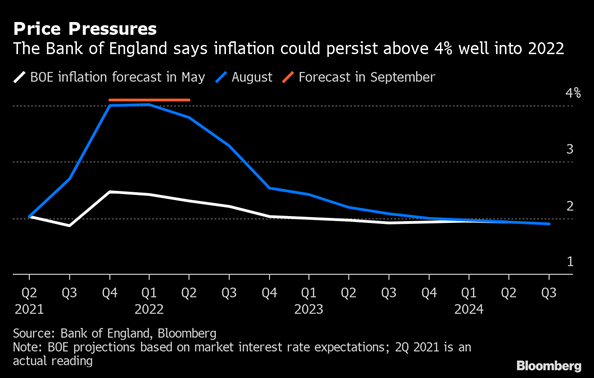 Meanwhile, the big news from the Fed is that it is likely to announce a moderation in the pace of bond purchases at the next FOMC meeting in early November, barring an unexpected shock. This may have surprised some, but the bigger surprise came from Chairman Powell at the post meeting press conference. Powell said that the tapering would finish mid-2022, a little shocking considering the Fed hasn’t fixed the start date yet. 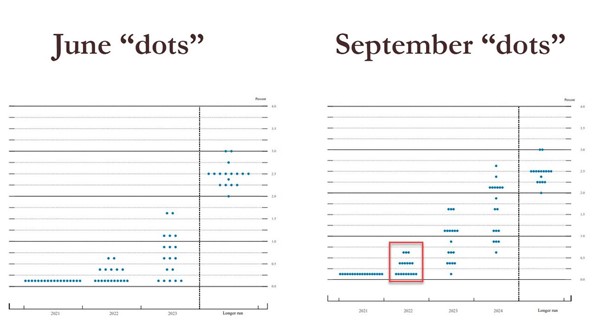 The infamous Fed dot plot showed that 9 officials now see a hike in 2022 compared to the 7 in June dot plot. Furthermore, while in June 2 officials thought two rate hikes would be needed next year, there are now 3. The market is now pricing in the Fed’s first-rate hike for September 2022 (three months after the Fed’s taper ends) and a possible second hike in December 2022.

As central banks turn their attention to removing accommodative Covid-related monetary stimulus, the prospect of higher non-transitory inflation is increasing as supply chain constraints continue to plague the global economy. I suspect that the transition central banks are in the midst of is unlikely to proceed as smoothly as they and markets hope - time will tell.

The winds of change were also blowing through the political world. Canada spent over $600m to hold an election that didn’t result in much significant change in Parliament and Prime Minister Justin Trudeau fell short of forming a majority government. Now that the election is over, so is the uncertainty, hence the outperformance of the CAD last week. With a fairly hawkish central bank, along with a slightly looser fiscal framework, the conditions are right for the currency to outperform. 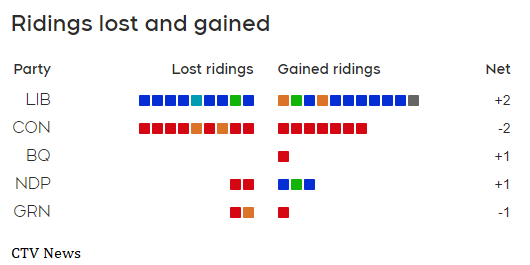 Meanwhile, the wind of change will definitely be at work after Sunday’s national election in Germany. Angela Merkel’s run has come to an end and Germany will have a new leader. The most important change will be in the Eurozone, as Merkle was the glue that keep it together. With her absence, a new dynamic will surely emerge.

Lastly, a lot of ink has been spilled in the media regarding Chinese property developer Evergrande and its $300 billion worth of liabilities. Its problem has been evolving over the last few months, but the financial media has heightened the anxiety around its debt and possible contagion with its comparison to Lehman and the Great Financial Crisis. The People’s Bank of China has injected the most short-term liquidity in eight months into the financial system to contain the problem. This issue may continue to weigh over the investment climate, even though direct foreign exposure appears limited. The way I see it, Evergrande is a symptom of the problem of today’s easy money policies. 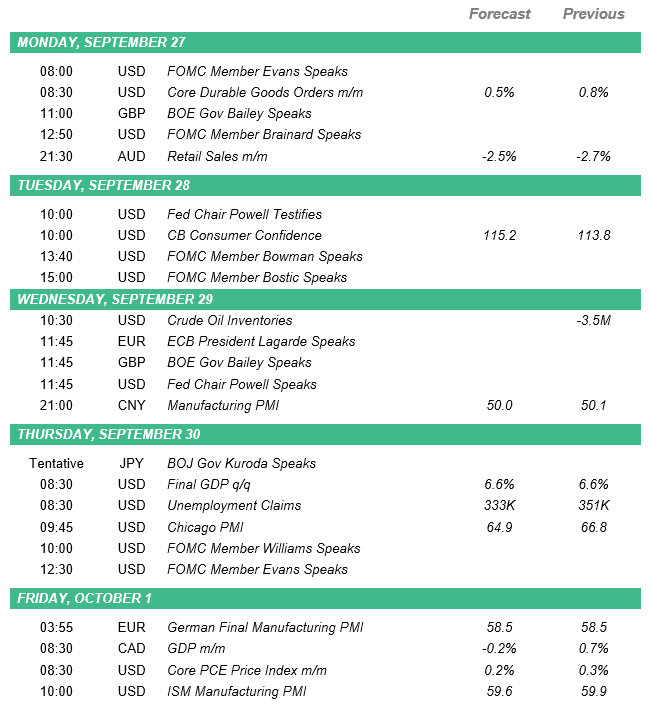