Central banks were front and center last week with two tweaks in monetary policy from two central banks. The first tweak was from the central bank of China and it was a total surprise. The People's Bank of China cut the reserve requirement ratio (RRR) by 50 bps for all banks, effective July 15. The move is expected to release around 1 trillion yuan (or $154 billion) in long-term liquidity into the economy. The RRR cut was meant to stabilise the funding needs of banks and lower their costs to support credit growth – but was this action stimulative? Or was the cut a major policy change to deal with an economy that's slowing too quickly? The answer will make itself known in the months ahead.

The other tweak was from the Bank of Japan; it tweaked its economic forecast as new emergency curbs to combat the COVID-19 pandemic hurt consumption. The BOJ now expects the economy to expand 3.8% in the current fiscal year ending in March 2022, down from 4.0% projected in April, but boosted next year's forecast to 2.7% from 2.4%. It revised up its inflation forecast for the current fiscal year to 0.6% from 0.1% and next year from 0.8% to 0.9%. These tweaks reinforce expectations that it will lag its global counterparts in dialing back its massive stimulus. 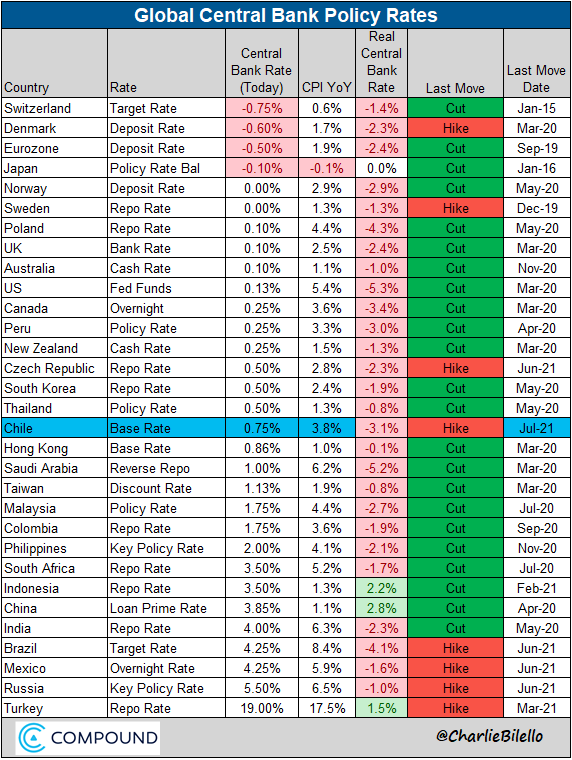 There were to taper to speak of from two of the dollar banks. The Bank of Canada announced that it would continue to scale down its quantitative easing programme. It tapered for the second time this year, reducing weekly purchases of government securities to C$2 billion, down from C$3 billion. The policy rate will remain at 0.25%, the figure set in March 2020. The decision was widely expected and is in line with market expectations of an interest rate hike cycle that starts in the second half of 2022.

The other taper, which isn’t exactly a taper but rather a complete stoppage. The Reserve Bank of New Zealand completely surprised the market and shifted to a more hawkish stance by ceasing quantitative easing. The central bank ‘s statement omitted a previous reference to the need for considerable time and patience to achieve its inflation and employment goals. Investors are now fully pricing in a rate hike in November, up from an 82% chance before the statement, and there’s now a 76% probability of a move in August.

With the central banks of China and Japan in dovish mode and the central banks of New Zealand and Canada on a path to raise interest rates, the head of the Federal Reserve, Jerome Powell is preaching patience. Powell's prepared remarks ahead of his testimony before the House Financial Services Committee on Wednesday said that the US economic recovery still hasn't progressed enough to start reducing its $120 billion monthly pace of its asset purchases. He also added that inflation is likely to stay high in coming months before moderating. “It’s very difficult to be precise about it,” Powell said of the goal of substantial further progress. “We will provide lots of notice as we go forward on that.” 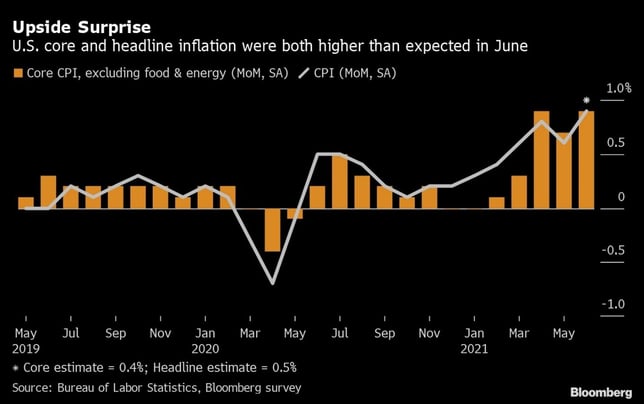 The move in the 10-year Treasury yields from 1.1% in February to 1.8% was a response to incoming inflation fears. During that time, the Fed kept telling us that the inflation pick up would be transitory or temporary. The Fed had plenty of company with this argument as the European Central Bank, the Bank of England, and the Bank of Canada, have reached a similar assessment. In time the market has come to believe the transitory inflation story and the 10-year yield has come back down to the 1.3 level. 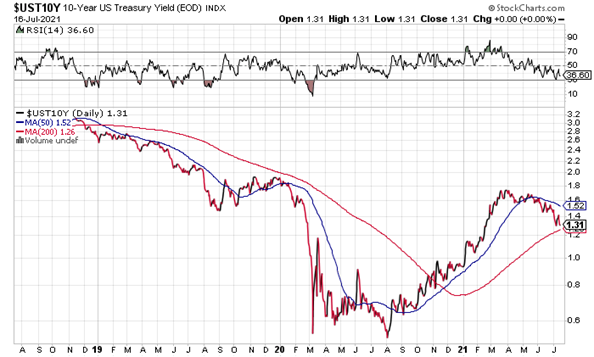 That’s the good story about falling yields. The bad story is that the fall in yields may also be telling us that the bond market is seeing economic weakness ahead. I’m not talking about a recession here, just a moderation growth. 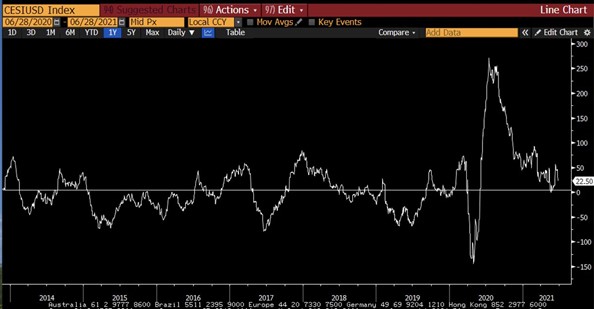 Look at this chart of the Citi Economic Surprises Index. It is approaching zero and if it falls below 0 it would signal that analysts have over forecasted growth and inflation. This may lead to a growth scare in Q4.

Another troubling sign is fast-spreading Delta variant; look at what has happened in the Netherlands just two weeks after reopening. They have had an eightfold increase when compared to last week after most restrictions were lifted. This may renew fears that the economic boom tied to the reopening of the global economy will fall short of the extremely optimistic forecasts put forward by economists earlier in the year. 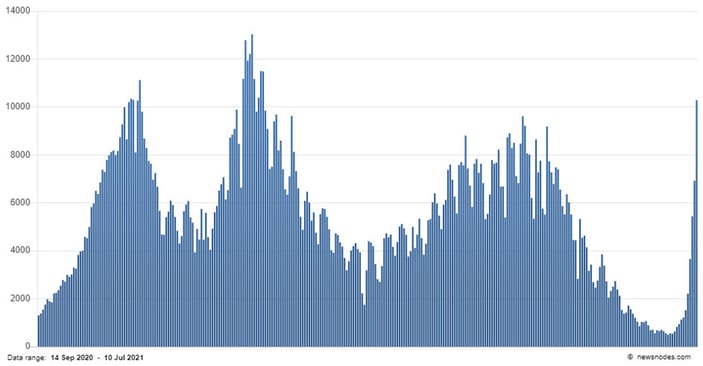 Notice that the US dollar index has been going up while bond yields have fallen since May. The USD tends to rally on economic weakness and falling yields.

In short, if the USD rises sharply while bond yields fall quickly, we could see downward pressure on equities. Having said that, the reaction function to lower growth and falling equities is more QE from the central banks and/or more fiscal stimulus from governments. 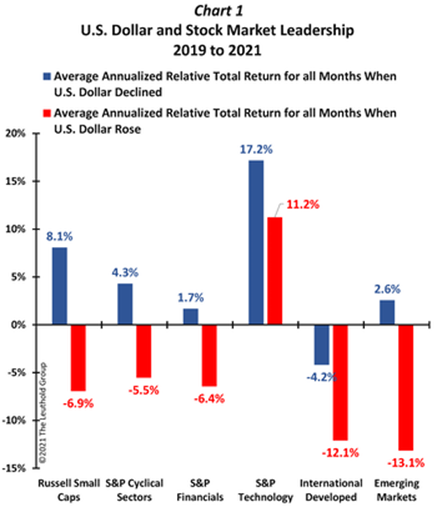 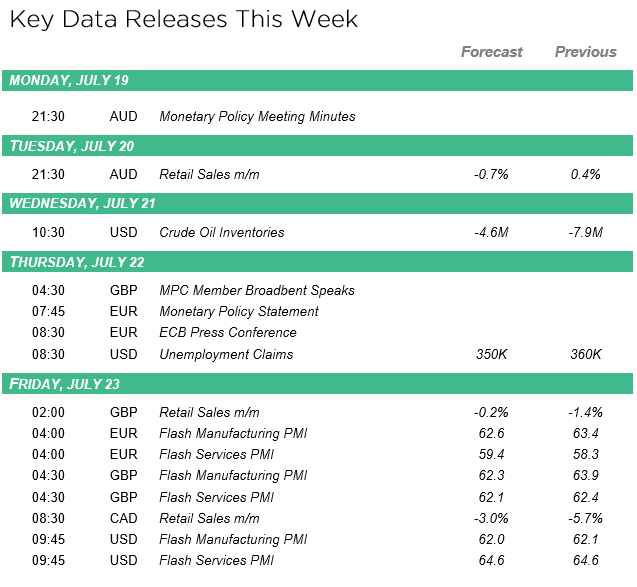