Time to Mix Things Up?

Last week witnessed a mix of economic statistics, central bank-speak as well as some interesting trade developments. In no particular order, we’ll take a closer look.

To begin with, threatened American tariffs on steel and aluminium imports from NAFTA partners Canada and Mexico, scheduled for possible imposition on May 1st, were put off until June 1st, at least for now. Although both currencies rallied a bit, that was it and range trading resumed after the news was digested.

The big event of the week was US non-farm payrolls, the most hyped economic statistic, on a par with the hubbub over the trade deficit back in the ‘80s and ‘90s and about as relevant. Regardless, Mr. Market watches it closely so we have to watch it too. Total jobs created came in at +164K, a rather soft number lagging the consensus call of +180K; the rate declined to 3.9% which beat the call of 4.0%; workweek was unchanged as expected at 34.5 hours while hourly earnings lagged at +0.1% vs the call of +0.2%. Two month net revision of jobs was +30K, which is always a good sign. Basically a mixed bag of numbers with no real indication of direction. Our learned colleagues Dr. Long and Mr. Short – who were both rather busy last week, more below – much prefer the weekly jobless claims number as a more timely measure of the US labour market. On that basis, new claims for unemployment insurance last Thursday were at levels not seen since 1969: 211K vs the previous week’s +225K, and has been around this level for quite some time now. Our two analysts believe that, while American employers are not hiring aggressively – per the recent jobs numbers – still they aren’t laying workers off, either. A likely explanation is that employers are reluctant to furlough qualified employees for fear that a sudden business pick-up will make hiring suitable replacements difficult, while they remain not entirely convinced that the economy is, indeed, building up a good head of steam.

US Jobless Claims – How Low Can You Go?

In the True North, one statistic of note surprised on the upside, with February GDP coming in at +3.0% yr/yr topping the call of +2.7%. Players had looked for a read of +2.8%, up from the previous +2.7%. The only other statistic ‘of note’ was the March Trade Balance, emerging at -4.15 Bln vs call of -2.25 Bln and well above the previous -2.90 Bln. Rather than paying much heed to these mixed numbers, investors instead listened very closely to Bank of Canada governor Stephen Poloz and his musings on Canada’s debt-ridden consumers. The Bank finds itself in a quandary: while steady GDP and job growth would seem to justify higher rates and the bond market is certainly saying that, with 10-yr Canada bond yields rising in lockstep with US Treasury yields, still the widening trade gap indicates the export sector is hurting badly. In previous remarks the Bank had made clear their concern over the health of this sector which employs so many Canadian workers; any ill-considered rate hikes might rally the Loonie and further impact exports negatively. On the other hand, Canadian consumers owe a lot of money. 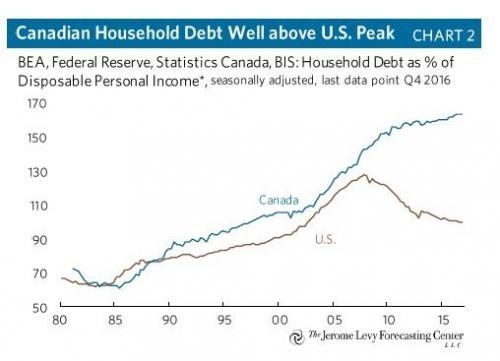 All of this debt – mortgage, credit card, HELOC – is costly to maintain:

Something like nearly half of existing Canadian home mortgages are up for renewal this year and, under pressure from rising bond yields, banks have been raising mortgage rates recently, so the cost of servicing all this debt is only going up. With all this in mind, Governor Poloz has a tricky balancing act to perform: raise rates enough to keep the bond market happy but not so much that the Loonie rallies sharply and hurts the already-weak export sector. Moreover, the magnitude of Canadian consumer debt – around 2.1 trillion – ‘poses risks to the economy and financial stability, and its sheer size means that its risks will be with us for some time’ in the words of Mr. Poloz. Additionally, as the Bank well knows, more money spent by consumers on debt service is less money spent on goods and services elsewhere in the economy. The Bank is in a tight spot, indeed.

Returning to the Land of the Free: to no one’s surprise, the Federal Reserve left rates unchanged at their meeting last Wednesday but, according to Dr. Long and Mr. Short, the Fed has subtly altered their outlook. In our colleagues’ usual style, they summarised as follows:

(‘Symmetric’ means the Fed is somewhat willing to let inflation overshoot its target of 2.0%)

The Fed thus appears to be mixing things up a bit, being a touch hawkish on inflation while somewhat dovish on an apparent slight weakening in the economy as a whole. Which leads us to wonder what the guys in Chicago think about this modestly ‘mixed’ change in outlook by the Fed. 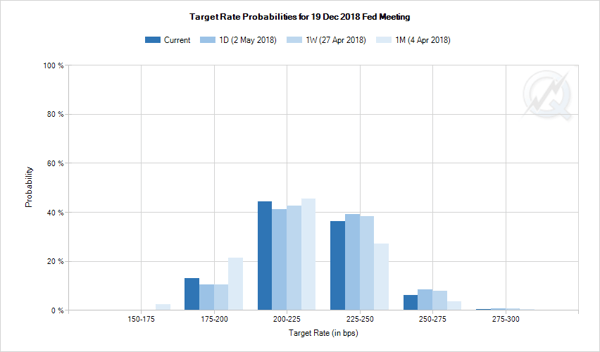 With the funds target rate currently 150-175 (1.50% - 1.75%), the pit traders have reduced somewhat the odds of three more rate hikes by December (225-250) and, in similar fashion, increased the likelihood of just two more hikes (200-225). Despite being the winner on the week, still this development would not be bullish for the greenback as players had widely expected three more hikes in 2018.

The coming week sees Canadian jobs numbers on Friday, several Fed speakers, US inflation releases and not much else. In the absence of hard numbers, unpredictable developments such as the current NAFTA talks and US-China trade discussions along with political news will likely move the market.